Home / Want To Have A Celebrity Physique? Try This Zac Efron Workout Routine! 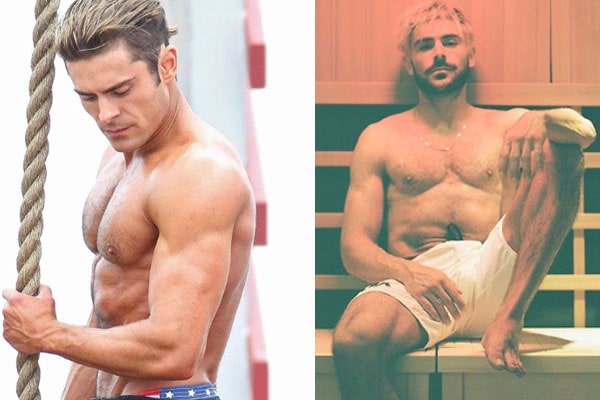 A couple of years back, Zac Efron starred in a series-turned-movie about a group of determined beach lifeguards – Baywatch. He co-starred with Dwayne “The Rock” Jonhson and Alexandra Daddario.

The movie focused on a bunch of LA beach lifeguards who stumbled upon huge drug-smuggling operations. But you knew that already, didn’t you? After all, Baywatch was a popular show due to the exceptional physiques of the celebrities who starred in it.

Truth be told, we think the movie’s main goal was to flaunt the physique of the stars involved in the film. Zac Efron paraded his shredded body by being topless throughout the movie. And who can blame him? If you had that body, you would’ve done the same.

Now, some people would say that Zac’s physique is impossible to achieve, especially because of the way it looked during that scene where he raced against The Rock to be accepted to the team.

You may find it hard to believe, but given the correct set of programs and the right amount of commitment, Zac’s physique is pretty easy to achieve.

In fact, we’ve listed down the exercises you must do (and commit to) in order to achieve that Zac Efron body you’ve been eyeing for.

Before we proceed, you need to know that each body type needs a different routine needed to achieve the best results. As some of you are aware, there are three body types – Ectomorph Body, Endomorph Body, and Mesomorph Body.

Each of these body types has different characteristics. So, routines will vary depending on your body type. Thus, you have to understand your body first. With the right training associated with your body type, you’ll be able to build a great physique in no time.

Zac Efron falls on the category of Ectomorph. Ectomorph has an athletic build, which makes it easier for them to lose unwanted fat and stay in top shape. In order for him to get that six-pack and that super shredded version of himself, he underwent a routine that most Navy Seals used to train.

Every week, he would train for 5 days and rest for 2. His daily program is upper body workout, followed by a lower body workout, and a variety of back workouts on the third day.

He’ll go back to upper body workouts on his fourth day, and his last day would be dedicated to doing lower body workouts. Each day ends with a cooldown workout that focuses on strengthening his core.

His program is focused on reducing his body fat while maintaining or stocking muscles. His workout has a lot of cardio in between to increase his stamina, and for his body to continue burning fat throughout the day.

Below is the summary of his routines.

Every day, Zac starts his workout routine with cardiovascular exercises, alternating between jogging and running, which lasts for a total of 10 minutes. This allows him to warm up before intensively proceeding to more explosive workouts.

After the warm-up, Zac does 2-3 sets of strength exercises that pumps up his triceps. After taking a break for a minute or two, he proceeds with another round of cardio.

The main goal is for him to perspire and burn body fats. You can try replicating this routine with your own twist by doing HIIT exercises for a total of 10 minutes.

Afterward, Zac proceeds to his second set of strength training. This round focuses on strengthening his smaller upper body muscles, such as his biceps and lower chest muscles. He ends the set with a final round of cardio, where he does another round of alternative jogging and running for 10 minutes.

Finally, he ends this workout with a variation of sit-ups (total of 180 reps) to cool down and strengthen his core.

After doing cardio, Zac’s lower body workout will focus on building his quads, where he’ll do repetitive sets of lunges and squats. During this part of the routine, you can add your own variation of quad workouts.

After completing the first set, his second round of cardio focuses on speed. During this set, Zac alternates between a 30-second sprint and a 30-second jog for 10 minutes. Upon replicating this set, you’ll feel the heat building up your legs.

You have to follow the cardio workout with a set of lunges with dumbbells and forward squats, that’ll keep your body shedding fat from your thighs. Proceed with another round of cardio (add some jump ropes if you can) and end your workout with some ab crunches and planks for your core.

Moving on to the most difficult workout that Zac Efron performs on this program, the back workout routine starts with another 10-minute cardio. During this set, however, instead of jogging and running, climb the stairs with and without dumbbells.

Zac does various back workouts that target specific muscles, such as dumbbell rows and lateral raises. This set is the perfect back workout, especially when it’s performed with proper posture and all the lifting is done by your back muscles.

Afterward, the second round of back strengthening workouts includes doing bent over flys, rows, and lateral raises. A variation of stair climbing exercises – with and without dumbbells – is his last round of cardio.

To end his back workout, Zac does a round of crunches and v-ups, but you can add some core strengthening exercises of your choice.

The program promotes physical strength, which will result in a more lean version of yourself. The program is designed not to have explosive muscles compared to other programs. This will make your body light and athletic with a whole lot of stamina.

Now, let’s talk about his diet program. As an ectomorph, Zac is blessed with a fast metabolism, which makes it very hard for fat to stay and camp in his body.

However, it’s considered a curse at the same time. Without having the right food, nutrients, or diet, your hard-earned body will lose its mass quickly. This is why your body needs a lot of protein.

Those who fall under the ectomorph category will absorb protein and fat so fast that they have to consume twice as much protein compared to others. This is so you can maintain the muscles that you pumped during your workout.

Another thing about being an Ectomorph, like Zac Efron, is that you don’t have to be afraid of taking in fats. Fats in your body will be burned as fast as protein. Zac’s lean and shredded workout program allows him to train on a full stomach, which makes the fat burning so much more effective than training with an empty stomach.

Along with the strict workout and diet program, the last thing that you need to have in order to achieve the celebrity physique that you’re aiming for is determination. Determination keeps you committed and drives you to keep moving forward to finish and stick to your daily workout.

Get more such informative updates only on SuperbHub.