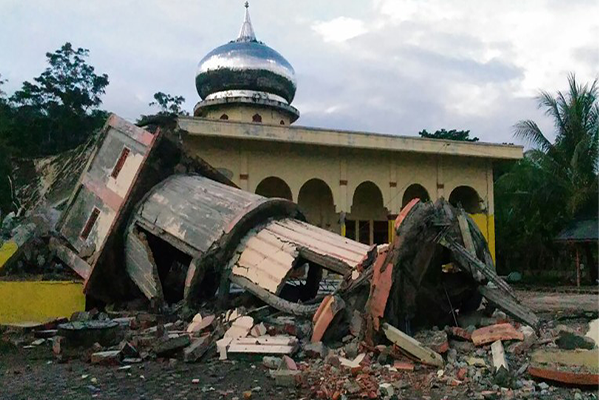 Earthquake hits Indonesia: Rescuers are in a constant plight to searching for the survivors amidst the rubbles caused by an earthquake in the Aceh province in Indonesia on the morning of Wednesday, 7th December 2016.

Indonesia, which lies on the Pacific ‘Ring of Fire’ zone is prone to earthquakes. And so, it has yet again been hit by an earthquake. However, this one seems to have made a ruthless impact. In the morning of December 7 2016, Indonesia was hit by a surficial 6.5 magnitude undersea earthquake rumbled the Aceh Province of Indonesia. It exactly hit the regency of Pidie Jaya which stands around 120 km south-east of Banda Aceh. The quake is said to have lasted for not more than 15 seconds. According to United States Geological Survey the earthquake is known to have arisen from a depth of 17 km on the north eastern coast of Aceh. Aceh has already been affected by earthquake many times, the worst being in December 2004 when 160000 people died in Indonesia with most being from Aceh.

In the duration, more than a dozen houses, around five mosques, 72 shops, a petrol station, a hospital as well as a school had collapsed. Panic arose after the quake after people went searching for their families. There have been extensive damages to many schools, houses, buildings, shops and more. According to the recent estimate, the death toll has reached 97. More bodies of the dead and the surviving are being pulled from the rubble as quick as possible. With the destruction of the local hospital in Pidie Jaya, it is difficult to treat the survivors. They are being sent to Banda Aceh. It is believed that about four or five people may still be buried under the rubble.

Aiyub Abbas, who is the regency head, has called for heavy tools to move the rubble quickly. Many school children have been affected due to the quake.  After-shocks are still on the way after the big quake. However, geologists have assured that there are no chances of possible tsunami.

The Indonesian president, Joko Widodo is soon to tour the massively affected areas. Villagers and rescue workers have joined hands to pull out any possible survivors from the rubble. There are still many people believed to be buried alive. The government is doing all it can to move quickly.  Condolences and prayers have poured in through social media sites all around the globe.