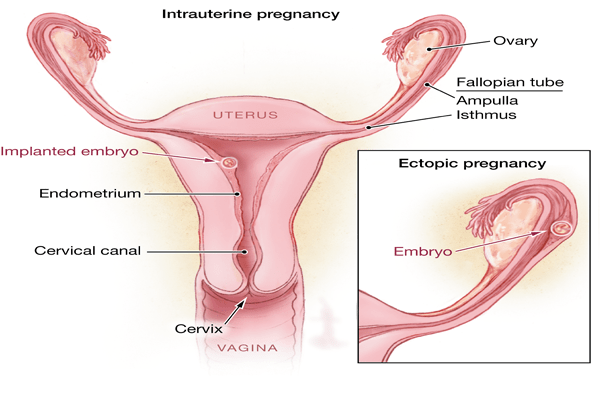 The definition of Ectopic itself makes the term more coherent, Ectopic means in an abnormal place or position. Likewise, Ectopic Pregnancy or Extrauterine Pregnancy is a condition in which the fertilized egg attaches itself in other places than the (Womb)uterus. The most affected people ranges from age 19-40, there are fewer than 200,000 cases of Ectopic Pregnancy in the U.S. 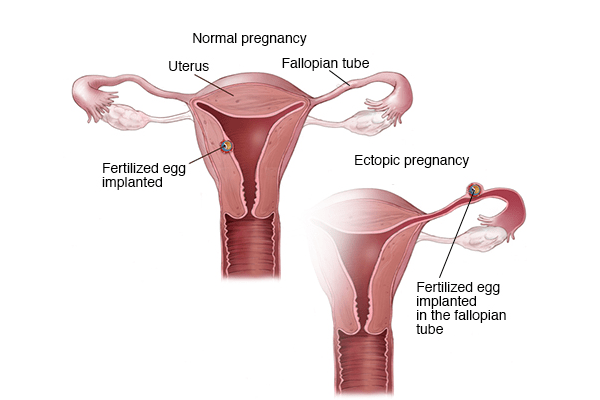 Fertilizing of egg in Ectopic Pregnancy and Normal Pregnancy.

The Fallopian tubes are the common location for an ectopic pregnancy so it’s often also known as tubal pregnancies. Ectopic pregnancies occur mainly in abdominal cavity, ovary or neck of the uterus(cervix).

For a normal pregnancy to happen the ovary releases an egg into the fallopian tube where it remains for about 24 hours. To be fertilized the egg needs to come in contact with a sperm and remain in the fallopian tube for 3 to 4 days after starting its move to the uterus. The fertilized egg then attaches to the lining of the uterus and continues to grow until a baby is born.

In cases of Ectopic pregnancies, the fertilized egg stays in the fallopian tube or someplace else in the abdomen instead of moving and staying in the uterus, these cases are termed as Ectopic Pregnancies. 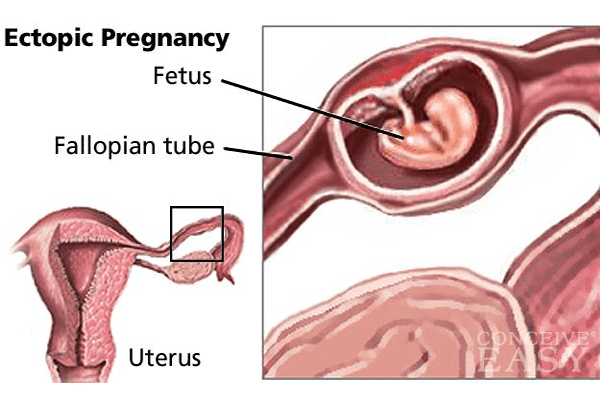 In these cases, the pregnancy can no longer continue and requires immediate emergency treatment. The cases of Ectopic pregnancies occur in 1 out of 50 pregnancies. 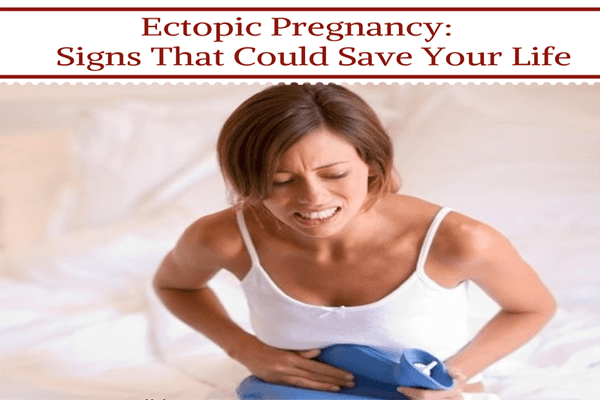 Ectopic Pregnancies happens mostly within the first weeks of pregnancy, a woman might even be unaware that she’s pregnant and may not have signs of a problem. In varied cases, the early signs and symptoms can also be the same of any normal pregnancies such as missed periods, breast tenderness and nausea.

Not all women experience these symptoms, and some experiencing symptoms are also similar to gastroenteritis and miscarriage. If someone’s instincts are sensing that something is not right, it’s OK to trust them and seek proper help.

If experiencing these Ectopic Pregnancy symptoms with or without shoulder pains, seek urgent medical attention via ambulance.

One may never know why they had an ectopic pregnancy and the cause isn’t always clear. The main cause can be a damaged fallopian tube that prevents the fertilized egg to get into the uterus and leaving it to implant someplace else. These are risk factors and causes of Ectopic Pregnancy in following cases:

In Ectopic pregnancy Test, an ultrasound tube is inserted into the vagina and the images of pelvis regions are made visible on a monitor. Transvaginal ultrasound reveals the gestational pouch in normal pregnancy of ectopic pregnancy but the findings are often not decisive.

Pregnancy tests like human chorionic gonadotrophin (beta HCG) blood levels are also used in the diagnosis of ectopic pregnancy. The Beta HCG levels are normally rising during the pregnancy but an abnormal rise of this hormone provides a clue to identify Ectopic Pregnancy. 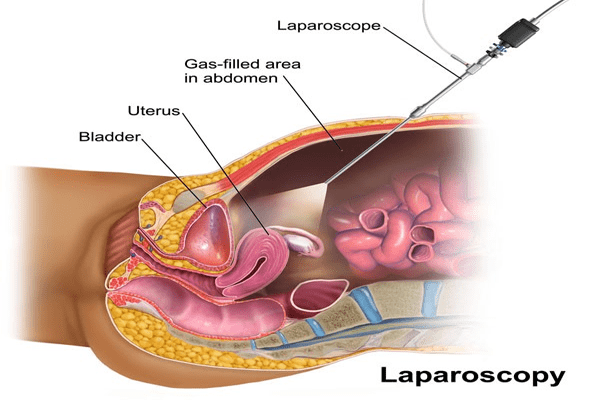 Laparoscopy is done to confirm the diagnosis of ectopic pregnancyImage Source: Pinterest

In addition, a physician also may undergo Culdocentesis, a procedure involving inserting a needle into the top space of the Vagina, in front of the rectum and behind the uterus. The blood present in the area indicates bleeding from a ruptured fallopian tube. 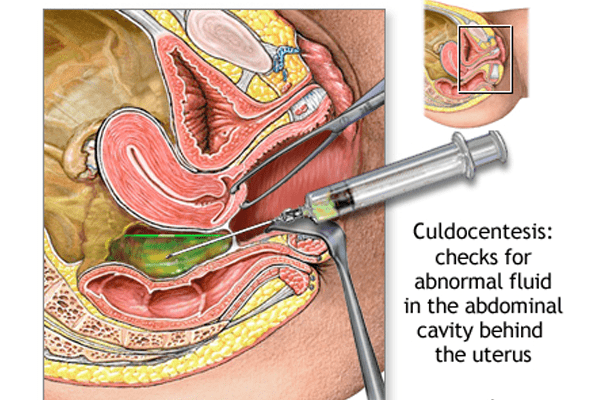 Culdocentesis checks for abnormal fluids present in abdominal cavity behind the uterus.

Ectopic Pregnancies are not safe for the mothers as well the embryo as it won’t be able to develop normally. For the sake of mother’s health and long-term fertility, the embryo should be removed as soon as possible. The treatment varies depending on cases of location and development of ectopic pregnancy.

1. Medication: In order to prevent the ectopic mass from bursting, doctors prescribe several medications. Common medication is a methotrexate(Rheumatrex). A drug that prevents the growth of rapidly dividing cells of ectopic mass.

Blood tests are encouraged to ensure the drug is working effectively. The medication will cause symptoms similar to miscarriage which is to be considered effective. Unable to get pregnant for significant months is a drawback of the medication.

3. Home Care: Doctors will provide a set of instructions to follow after the surgery. Proper home care should be provided to keep the cuts clean and dry and heal likewise. One must check for the signs of infection after Ectopic Pregnancy surgery which are:

Since Ectopic Pregnancy is not predictable and the prevention is also not possible in every case. One can reduce a significant amount of risk through good reproductive health maintenance. In over 50% of women with Ectopic Pregnancy have no identifiable risk symptoms.

A person can reduce the risks by using contraceptives in intercourse and limit number of sexual partners. This reduces the potential risks of STD’s which can cause PID,  a condition causing inflammation in fallopian tubes.

Quit smoking as a preventive measure to prevent Ectopic Pregnancy.

Maintain a doctor visit routine and regular check-ups, gynecological exams. STD screenings are also considered beneficial to be wary of potential risks. Strategies can be built up to maintain personal health and quit smoking to avoid risks of Ectopic Pregnancy.