Home / Entertainment / ‘The Walking Dead’ star Chandler Riggs shocked by his death! Twitter explodes over it

‘The Walking Dead’ star Chandler Riggs shocked by his death! Twitter explodes over it 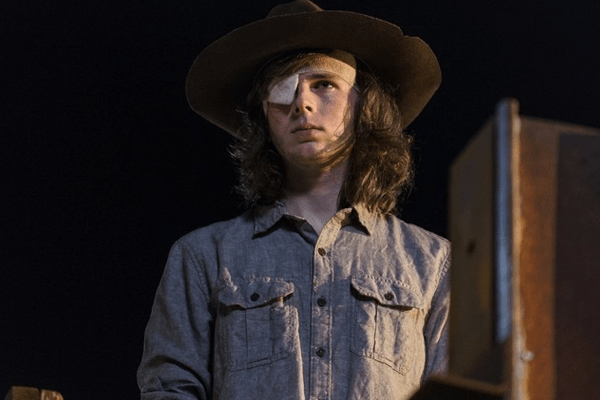 It’s surprising to say that The series totally took a U-turn from the comic book in its winter finale, killing a major character who is pretty alive in the comic book.

That’s true, ‘Ol Carl Grimes acknowledged that at the very end of Sunday’s episode, he was bitten by a walker. Though we haven’t seen him die immediately, star Chandler Riggs confirmed that the first episode of February will be the last one for him.

If you were shocked by this news, You are going to be more shocked if you come to know that Riggs too was surprised to know about his character’s death.

He said, “The news totally wrecked me and my family because this show has been such a big part of my career. For few days, we were totally gazed, what to do next. Recently, I have bought a house in Senoia (nearby the place where show films in Georgia). That’s really a big compromise that I wouldn’t be on the show anymore.”

He further added, “I gave all my focus on acting and music by dropping college in last year. My decision came to be great. But it’s all ruined now.

He continued, “Leaving the great TV series is definitely not my decision.”

He didn’t expect Carl to get killed out of nowhere, Andrew Lincoln also said. He said that it’s still a good move for the show. “Although it was scary for me and everyone because no one expected this to happen.”

Andrew Lincoln further said I had never trusted Gimple or AMC but Chandler always did. I know the pain. How much he is hurt inside. At the same time, we are very lucky to be part of this awesome show and appreciate all the love from fans and followers.

What are the reactions on Twitter about Carl being killed in the Walking dead?

After knowing the fact that Chandler Riggs is no soon going to leave the series, his fans and followers were really exploded. Let’s have a look at internet reaction.

This show is so cruel. #TheWalkingDead pic.twitter.com/RppopkMirW

I need a hug. #thewalkingdead pic.twitter.com/7s4RgK0mtP

CARL IS IMMUNE. LET’S SAY IT TOGETHER. #TheWalkingDead pic.twitter.com/TGZvEwIhjJ

The old man Rick scene was the future I wanted to see; Michonne, Judith, and Carl beside me. Unfortunately it couldn’t be a reality. #TheWalkingDead pic.twitter.com/86x5qT5S2P

Really, Carl Known to be Carl Walking dead is hurt and we are too. But, the show must go on. That’s the entertainment industry!  We hope to see you soon in TV with new or same TV series. It is evident that your fans will definitely bring you back!
Carl Walking dead