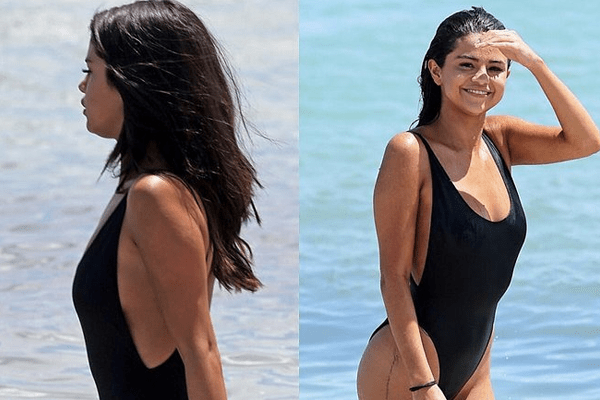 Image Source: PopSugar
The year 2017 has been really tough for Selena Gomez. She’s ending stiffy year in Cabo with her besties. Selena Gomez spotted in a Swimsuit makes her look like a beach goddess!

Luxurious Trip It Is

According to E! News  Selena and her gang landed to the seaside in extreme luxury. They arrived on a private jet on Wednesday, December 27.

They are hanging around in a private villa featuring 360-degree views of the sea, an infinity pool and spa, a personal golf cart and butler service. The comfort didn’t seem cheapo. They paid 18000 USD per night for their fancy vacation.

“The singer appeared very excited as she landed and was chuckling with her friends and taking photos.”

They are all set to spend New Year’s Eve together and have some fun dinners.

Selena alone was flaunting black swimsuit while other three were wearing a bikini.

Raquelle Stevens shared a cool photo of their Vacation on Friday. She captioned the picture writing, “Our 6th New Years together! Grateful for so many amazing memories. ☀️?”

Everytime, Selena Gomez spotted in a Swimsuit, she looks fresh, and has a new glow. Hope with the end of 2017, 2018 brings Selena new beginning and lovely memories of 2017.

Our 6th New Years together! Grateful for so many amazing memories. ☀️?

While Selena didn’t appear in ready-for-breakfast kind of picture.

When asked, where’s Selena, one of the followers in instagram said:

“Stop asking about Justin; he’s is in Antígua Caribe not in México and Selena is with Samuel.”

Courtney Barry also shared a photo of the beach on her Instagram. Seems like she is on full vacation mood as she captioned, “Airplane Mode.”

Why is Selena Not With Justin?

All of their fans and followers might be wondering, Why Selena and Justin, not celebrating together after their recent patch up?

Well, the reason is Selena’s family doesn’t seem happy about their idea of getting together.  On contrary Justin’s Mom loves Selena.

She said exclusively with PEOPLE that, “I really don’t have much idea about their personal relationship because Justin doesn’t share much about them, but personally I love her.”

The couple didn’t spend Holiday season together. They were having fun with their respective family on the Christmas.

While Jelena is in a luxurious holiday trip, where is Justin?

While Selena is working on her tan, Justin is improving his hockey skills.

While Selena Gomez spotted in a Swimsuit spending New Year vacation in Cabo, Justin fans found that he has been spotted playing hockey in his home country Canada.

Also Read: Selena Gomez and her Mom Mandy Teefey unfollowed each other on Instagram? Is it because of Justin Bieber?