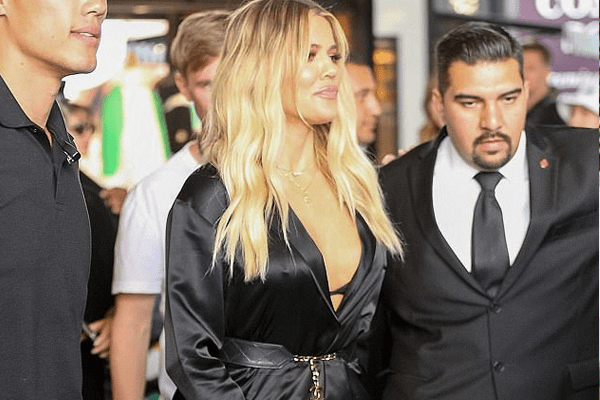 Picture credit: pinterest
The Keeping Up With Kardashians star Khloe Kardashian who is almost six months pregnant is fond of workouts.  Seems like she wants to be a fit-Mommy! After the late official announcement of her pregnancy, she can’t stop posting and sharing her pregnancy news and photos.  Pregnant Khloe and her boyfriend, Tristan Thompson officially announced their to-be-parent.

My greatest dream realized! We are having a baby! I had been waiting and wondering but God had a plan all along. He knew what He was doing. I simply had to trust in Him and be patient. I still at times can’t believe that our love created life! Tristan, thank you for loving me the way that you do! Thank you for treating me like a Queen! Thank you for making me feel beautiful at all stages! Tristan, most of all, Thank you for making me a MOMMY!!! You have made this experience even more magical than I could have envisioned! I will never forget how wonderful you’ve been to me during this time! Thank you for making me so happy my love! Thank you to everyone for the love and positive vibes! I know we’ve been keeping this quiet but we wanted to enjoy this between our family and close friends as long as we could privately. To enjoy our first precious moments just us ❤️ Thank you all for understanding. I am so thankful, excited, nervous, eager, overjoyed and scared all in one! But it’s the best bundle of feelings I’ve ever felt in my life! ❤️❤️❤️

Though the announcement was made late, Khloe has been regularly updating her fans and followers about her belly bump on Social Networking apps such as Instagram, Snapchat, and Twitter.

People criticized Khloe Workout Routines on social media saying she was working out way too much. But Khloe responded them via twitter linking the benefits of exercising during pregnancy.

For the ones who think they are physicians all of a sudden ??‍♀️ but MY doctor and I communicate and my workouts are cleared and highly recommended. Thanks kiddos! Don’t make me stop sharing shit https://t.co/7raJUgmcBA

She again shared videos of her working out in a gym, along with sister Kourtney Kardashian. The six month pregnant Khloe covered her baby bump in a light gray Adidas sweatshirt, and a black legging and black sneakers.

Pregnant Khloe captioned videos, “Hello guys, a very happy holiday, I am just done with my workout, so I look crazy.”

“I’m not feeling well. But happy holidays, My best wishes to everone to be safe for the New Year.