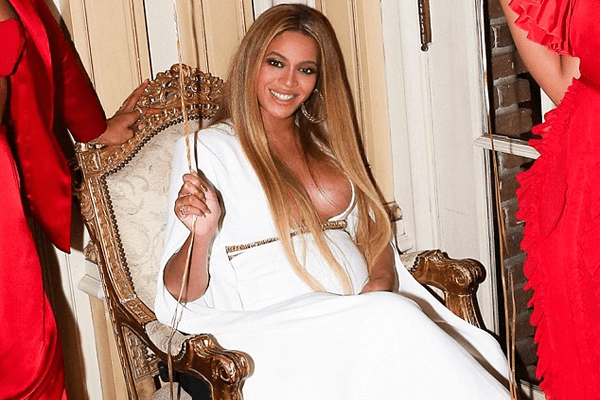 We know that Beyonce rocks even her pregnant attire, but she has been crossing every boundary there is since she has gotten pregnant. From performing in the Grammy to her intimate photo shoots with her family, she has done it all. More recently she walked in Solange’s Grammys after party showing off major cleavage in an all-white dress looking like an angel.

As if the Grammy Award wasn’t enough for the star, Solange kept the part going in an intimate after party the next day after the grand Grammy celebration. And who caught our eye? Of course, the Queen Bey!

Beyonce walked into the party with her husband Jay-Z who sported a casual dark blue suit and bow. Beyonce walked in like an angel with her busty boobs hanging freely behind her white gown. The deep thigh split and plunging neckline beautifully accentuated her shimmering body.

Beyonce has been dropping us surprise bombs ever since she got pregnant. She is expecting twins this year. She took to her website to share pictures of the intimate Grammy after party at Solange’s.

The host, Solange looked stunning in an all-red dress. Beyonce’s sister Solange Knowles hosted the party in a celebration for her first Grammy Award in the Best R&B Performance category for her song Cranes.

Kelly Rowland also sported a red dress. She gave us a slight hint of her abs in the cute crop top and had worn a matching skirt. She had also topped it off with a matching coat.

Beyonce graced us with a performance from her album Lemonade at the night of the Grammy. She performed with 20 backing dancers while she lay in the stage wearing a floor-length crystal-embellished gown which looked absolutely immaculate on her. Beyonce’s album won the Best Urban Contemporary Album prize while her song Formation won the Best Music Video at the Grammy’s.

Beyonce wowed us on the Grammy’s red carpet where she wore a sizzling and shimmering red dress that gave a hint of her growing belly. Queen Bey is in the second trimester but she has kept her work going and has not disappointed her audience.

The Beehive is extremely proud of Queen Bey and her achievements although she lost a prize to Adele. We hope the best for Beyonce’s career and her health!