Home / Entertainment / Not famous enough? Seinfeld adamant on his decision to not give Kesha “that hug”!

Not famous enough? Seinfeld adamant on his decision to not give Kesha “that hug”! 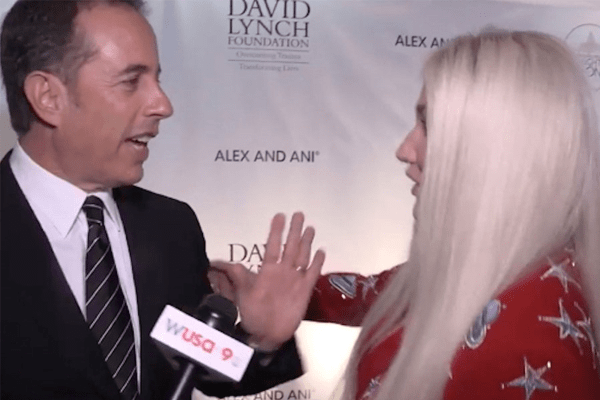 Picture From: businessinsider.com
Kesha might be famous for her music-lover fans but just not enough for the comedy legend, Jerry Seinfeld! Jerry Seinfeld backed away with a strict “Not Thanks” when Kesha asked to hug him at the National Night of Laughter and Song! Is Jerry Seinfeld not a hugger or is he just being rude to Kesha? Let us find out!

Is Jerry Seinfeld not willing to hug Kesha?

Jerry Seinfeld is funny in ways we never knew. Seinfeld was busy giving an interview while in the David Lynch foundation’s National Night of Laughter and Song when Kesha popped in between and requested a hug.

Kesha was head over heels when she saw the famous comedian and said “I’m Kesha. I love you so much” followed by a fangirlish question, “Can I give you a hug?”.

Kesha, as well as most of us, might have expected a warm hug and a few words but this was not the case with Seinfeld who looked confused and concerned. Seinfeld strictly backed away from the Tik Tok singer repeatedly saying “No thanks”! It did not happen once, twice but THREE TIMES!

The entire happening was so awkward that we expected Kesha to have a belt down! As soon as, Kesha walked off humiliated, Seinfeld went on admit that he had no idea who she was!

Any clarifications on this discriminatory act?

No, apparently the comedy legend had no clarifications to make regarding his weird unloving act. Seinfeld was adamant on his decision to not give Kesha a hug. While in a conversation with Extra, Seinfeld shared that he was right in the middle of an interview and Kesha coming to ask for a hug was “a little off”. He also revealed that he did not “huge a total stranger”!

So Kesha is not that famous after all!

Seinfeld proudly shared that with him, you have to say “hello” in order for him to “start somewhere”. So we learn that Kesha’s approach was not well suited for Jerry Seinfeld. He furthermore added that he “would’ve liked her” but that he also needs to “know who are you”! Makes Sense!

Kesha and Seinfeld met off camera after the incident and Seinfeld revealed that Kesha was “very nice about it” and that they laughed about it!

Say what you may, but Seinfeld still had no hugs to share with Kesha!