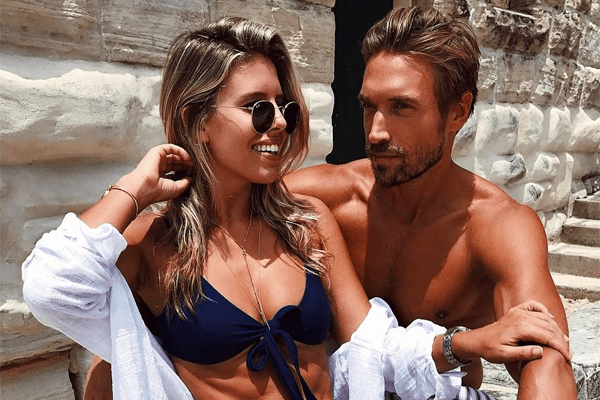 Model and Entrepreneur Natasha Oakley is in a relationship with her 41-years old boyfriend Gilles Souteyrand who is 15 years older than her.

Natasha Oakley is a model on the rise. Born in Australia, she is a Swimwear model, entrepreneur, and a lifestyle blogger. She rose to fame after co-founding the A Bikini A Day blog along with Devin Brugman.  She would daily post photos wearing different bikinis. She is also known for the steamy love life with her boyfriend Gilles Souteyrand.

Before finding fame, Natasha admitted to sleeping together with Devin. But she notes that was due to necessity because they only had one bed. Her current boyfriend is Gilles Souteyrand. He is a model and also her personal trainer.

Natasha is a big fan of traveling. She is seen traveling to multiple exotic locations flaunting her sexy body. She posts pictures of her travels on her Instagram page on a regular basis. She also travels a lot with her boyfriend Gilles.

Natasha has been very open about her relationship. He revealed her boyfriend to be none other than her personal trainer  Gilles Souteyrand.  Giles is a model himself. He is a French model and works primarily in London.

Gilles Souteyrand and Natasha have a very intimate relationship. They are seen together a lot. Gilles loves Natasha very much. The two are seen being intimate even in public.

As noted above, Natasha Oakley likes to travel a lot. She is seen travelling to various places with her boyfriend Gilles Souteyrand. She has traveled to exotic locations like Guanajuato, La Valise, Quintana Roo, Bali and many more. She has traveled a lot of beaches all over the world.

An interesting thing about her travels is that she travels to most of these places with her boyfriend Gilles Souteyrand. The two are seen together in these romantic locations being intimate with each other and they look stunning together.

Natasha and Devin co-founded the company Monday Swimwear, for which she is best known for. They would together design swimsuits and bikinis. Natasha would also model for her company. Soon, her products were bought in massive amount and she also received big modeling contracts.

Natasha Oakley and boyfriend Model Gilles Souteyrand are in love since 2015.