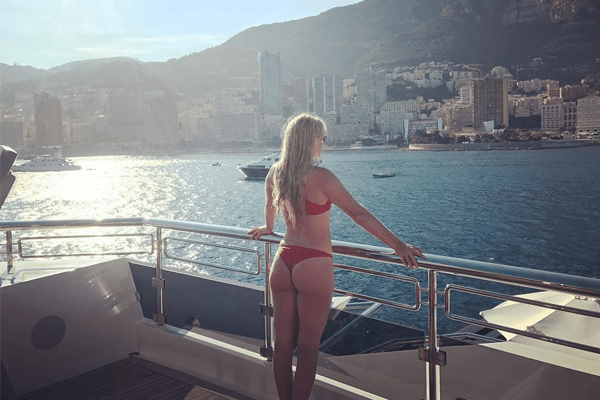 The 32 year old Lindsey Vonn posts photos in Instagram enjoying in yacht hours after her ex-boyfriend Tiger Wood gets arrested for driving under the influence. Her photos relaxing under the cozy sunny day indicate her indifference to her boyfriend’s struggle.

In the photo taken from the posterior side, she gazes towards the city from the yacht. Vonn shows off in red thong bikini with her enviably beautiful body under the sunny effect.

She took some time out of the snowy mountain and joined Bella Hadid in the party. The skier was spotted spending quality time with her new man Kenan Smith.

While the golfer, Woods gets into trouble a few minutes away from his Florida home, Lindsey Vonn posts photos with caption ‘Thankful for great friends and fun adventures but keeping my eyes on the horizon. The future is bright’.

Thankful for great friends and fun adventures but keeping my eyes on the horizon. The future is bright. ??

Before this, the gold medalist has posted photos with her seemingly new boyfriend Kenan Smith in Instagram. In the previous photo, Vonn wore one-piece swimsuit showing off her cleavage while Smith was shirtless wearing the matching aviator shades.

Lindsey Vonn posted photos lounging in a luxury yacht. One after another, she posted her photo in the bottom of water slide as her smile sparkled like the blue water after sunbeams fell on it.

On the other hand, her ex went through a hard time while he was pulled over at 3 am and put into Palm Beach County Jail. He got out of jail after 8 hours and apologized for his action. Wood’s statement reads he had not been drinking and the intoxication was the because of his medicines.

The authorities saw him ‘driving erratically, all over the road’ in his Mercedes and they pulled him over.

The skier and the golfer’s relationship dissolved in May 2015 after dating for 2 years.

After break up, she diverted her attention to her trainings instead of dating Smith right away. Vonn started dating Smith from a year ago.

Adventures in paradise with my ❤