Home / Entertainment / Golden Globe 2018 in all Black theme! Was it planned beforehand?

Golden Globe 2018 in all Black theme! Was it planned beforehand? 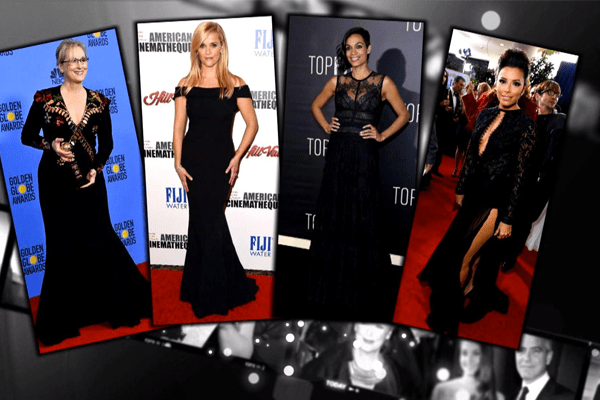 Picture credit: Today show
The actresses were all in black in  Golden Globe 2018 in protest of the sexual assault that has been exposed at the heart of Hollywood.
Previously it was known that small group of actresses are wearing black, but almost every actress who is nominated for awards as well as presenting the Golden Globes were seen in a black dress. Actresses like Jessica Chastain, Meryl Streep and Emma Stone were on black as rumored previously.

People reported, “All the actress attending the Globes are wearing black gowns as a means of protest.”

And So did the men

One of the famous fashion publicists mentioned Hollywood Reporter: “Every gown request so far is for black.”

New York-based stylist Michael Fisher, who has an order of dressing nominees Hugh Jackman and Sam Rockwell, reported actors will too wear black “in solidarity”.

“Everyone has been asking me.. Yes, the men will also support women’s solidarity moment wearing-all-black to protest ongoing sexual harassment.”

Urbinanti shared a post to Instagram writing, “At least ALL MY GUYS will be flaunting in black. And this may not be the right decision to choose to be the unique man out here… just sayin…”

Most of the actors and actresses were seen in black gowns and suit.

Some of them addressed the sexual harassment. Here’s what that has to say:

Amber Tamblyn, the speaker in support of Time’s Up initiative said, “Tonight, is just an experiment of  Time’s Up movement rejecting colourful gowns for black ones on the biggest, award Golden Globes” Tonight is not a griefing. It’s an awakening.”

Bella Thorne confessed that she was sexually accused at the age of 14. She shared her molestation on Instagram and thanked Time’s moment.

I was sexually abused and physically growing up from the day I can remember till I was 14..when I finally had the courage to lock my door at night and sit by it. All damn night. Waiting for someone to take advantage of my life again. Over and over I waited for it to stop and finally it did. But some of us aren’t as lucky to get out alive. Please today stand up for every soul Mistreated. #timesup

Amanda de Cadenet said, “This is a beautiful message of unity to the world,  ‘Time is now up. Women are ready for a change. All of us are on board for this.’