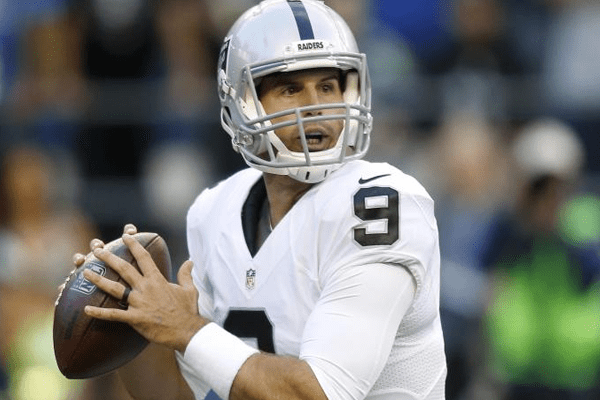 Picture credit: Bleacher report
Christian Ponder is an American football quarterback; currently, he is a free agent. He was fond of football from very early days. He was the football player at Florida State University in his college days, and later on, joined Minnesota Vikings.
When Samantha Ponder interviewed Christian Ponder, in Liberty University Convocation, the Ex-Vikings revealed that he desired a supreme power to prepare for game days.

The former Minnesota Viking revealed, “With my belief into the NFL, I honestly thought if I had prayed and got into the bible I’m able to play well on Sunday.” “I kept on using God for myself.”

He further added, “And when I came to know that my belief system was so flip and flop with how I played because when I had performed well I used to be like, ‘God’s awesome.’ And when I hadn’t played well, I always used to blame God for me not performing well. So when I met Sam, who is a strong believer, led me closer to the God.”

Christian Ponder, added that his faith in God had strengthened upon meeting his wife who is awakened.

Christian Ponder had to face criticism and hatred from fans in Minnesota for the very poor performance.

Why there’s no sorry for how Vikings fan treated Christian Ponder?

The departed Minnesota Vikings quarterback was seen all over internet news when his wife had commented on how the duo was treated in the Twin Cities.

“The first time around, it was more about the environment. It was rough. I don’t think that’s a surprise. We were easy targets when we were [in Minnesota]. It just got so bad when we were there.”

Well, there’s a viewpoint that Minnesota’s fans are really passionate about their hometown teams, especially the Vikings. And if Minnesota is not putting a good team out on the football field, especially after the very poor performance by Ponder, the fans will let the team and management know about it.

It’s not good when some of the crazy fans post out very insane comments but that has to be obvious and expected in the football field.

Until playing for the third season with the Minnesota Vikings, Ponder had already started taking the last bench, and his career with the Vikings concluded. At the time of 2014 off-season, the final nail in the coffin was placed when Vikings drafted his replacement in Louisville quarterback Teddy Bridgewater.

Minnesota had to lose by a final score of 42-10 as Christian Ponder was sacked six times and he completed just 50 percent of his passes for 222 yards and two interceptions.

After that, he was officially kicked out from Vikings, and Ponder became a free-agent.