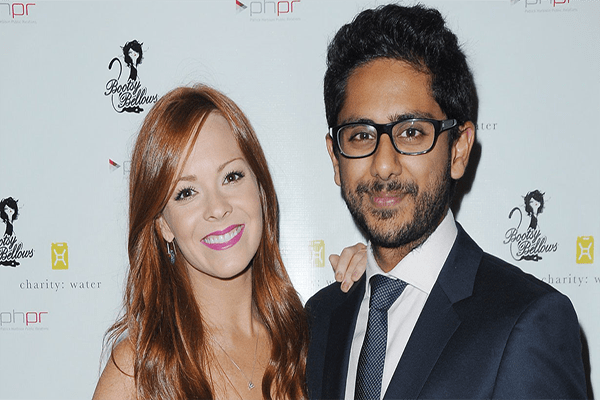 Yes! The adorable South African Adhir Kalyan and the attractive American actress, Emily Wilson have tied the knot and their fans are overwhelmed with happiness. Adhir Kalyan exchanged vows with his girlfriend turned wife, Emily Wilson in October this year.

We might best known Adhir Kalyan as his character Timmy from the CBS’s Rules of Engagement. Similarly, we might recognize Emily Wilson from her character Ellie Trout from the ABC’s General Hospital. The two got married this October 1st in Palm Springs, California.

Adhir and Emily were in a long term relationship. The pictures of them together were swarming on both the actors social media accounts since they got together. Of course their fans got excited! Kalyan and Wilson stole our hearts when Wilson posted a collage picture of the couple posing at different romantic and funny stances while Emily showed off her gorgeous engagement ring in April 2015. The picture got her fans screaming like crazy. The immaculate and adorable picture was captioned classically, ‘We’re engaged’. The couple began the preparation for their marriage. They had plans to get married in South Africa; however, the marriage location was set at California.

The big day arrived soon on 1st October 2016, when they got married in Palm Springs, California. Emily Wilson sported an immaculate white dress with her short hair, while Kalyan looked classic and adorable in a black suit and tie and his glasses. The brides maid looks gorgeous in white floral dresses. They exchanged their vows amidst family and friends. Congratulations were on the way and the environment was calm and cozy. The marriage was star-studded with many co-actors of Kalyan and Wilson as attendees. The social media sites were filled with pictures of the wedding from the attendees with a hashtag-Keepingupwiththekalyans.

The 31 year old Emily Wilson and 33 year old, Adhir Kalyan are now tied in the holy matrimony. The newlywed has harnessed huge media attention through their marriage. Their fans were excited at the news of their wedding and have been happy when they tied the knot this October. We hope to see little Kalyans soon. When this American beauty weds the South African-Indian heart throb, it is undoubtedly going to be a sweet and spicy curry! Congratulations to the adorable couple.


We&39;ll always be ManUtd fans, but we&39;re also so stoked to be Original Members of LAFC! Excited to support a team in the city we call home! pic.twitter.com/HP1x5EZT4X

We&39;ll always be ManUtd fans, but we&39;re also so stoked to be Original Members of LAFC! Excited to support a team in the city we call home! pic.twitter.com/HP1x5EZT4X