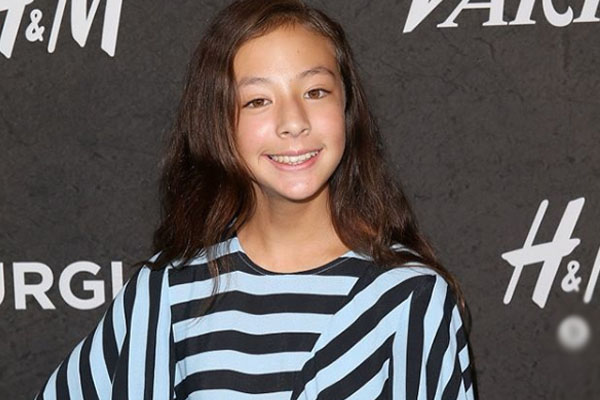 The American child actress, Aubrey Anderson is popular worldwide for her role in ABC‘s Tv series Modern Family. Aubrey made her debut in the show, Modern Family in 2011 when she just four years old.

Born on 6 June 2007, in Santa Monica, California, U.S, Aubrey spent her entire childhood at her motherland. Her father Kent Emmons is a media entrepreneur whereas mother Amy Anderson is an actress and stand-up comedian. The young Aubrey was named as Aubrey Frances Anderson-Emmons at the time of birth by her parents. However, she got popular as Aubrey Anderson in Hollywood industry.

The 11 years old, Aubrey Anderson’s net worth is estimated to be $2 million. The child actress has earned all her fortunes from her career in Hollywood’s television industry. Aubrey started working as a child actress for TV series Modern Family at a young age of 4. She became part of the show, Modern Family since its 3rd season and had already worked for seven seasons yet. No doubt, the Aubrey must be earning a substantial amount of salary from the channel for her acting.

Aubrey Anderson follows a lavish lifestyle in her day to day life. She loves traveling and visiting different places on her weekends. Moreover, Aubrey loves spending her time with pets. She has three dogs and two goats in her home. Besides that, Aubrey has gathered a huge fan following over her social media profile. Her parents operated Instagram account has already more than 150k followers by October 2018.

Alongside, Aubrey’s role in Modern Family as Lily Tucker-Pritchett has successfully won her awards three times. She received the title of Outstanding Performance by an Ensemble in a Comedy Series at Screen Actors Guild Awards in 2012, 2013 and 2014.

The 11 years old actress, Aubrey Anderson started living with her mother Amy Anderson after her parents got separated. Aubrey is of Asian-American ethnicity as her mother, Amy Anderson is of Korean whereas the father Kent Emmons is American. She also has a half-sister, Ashley Emmons who lives in Missouri.

Aubrey along with her mother Amy also works as a Youtuber and has their channel, Foodmania Review. The mother-daughter team review different foods, treats, snacks and drinks from all over the world. The channel has 14k subscribers to date, and people love watching the mother and daughter together on screen.