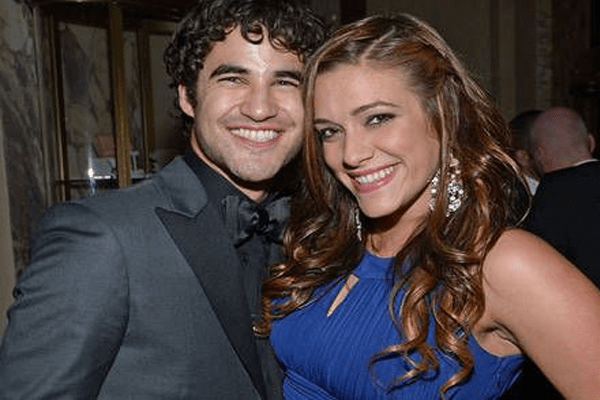 American actor, Darren Criss might be best known to the audience as the gay character from Glee. But in real life, he is a super handsome guy who has a musician girlfriend. Yes, Darren Criss is in a relationship with his girlfriend, Mia Swier, and the couple has also been seen in Dancing With the Stars. Let us find out a little more about the cute couple, Darren, and Mia!

American actor, Darren Criss plays a gay character Blaine in Glee. Blaine is engaged to his gay partner Kurt played by actor Chris Colfer. Their on-screen kisses have been hot and have been misleading too. Having played a gay character on-screen in Glee, made Darren Criss’ fans unsure about his sexual orientation, but Darren was quick to remove that doubt off the table.

When asked about his sexual preference, Darren Criss made it clear that he is actually straight and that it is empowering that he is ‘a straight male playing a gay character in the Hollywood’. He also shared that it is ‘more powerful for both communities’ and we can’t agree more!

Criss also said that it does not really matter if he is gay or straight and that he was raised in a gay community without knowledge of it during his childhood until he had been old enough to know. So, it makes us clear how Darren Criss perfectly plays his gay character!

Dareen Criss did not end at his sexual orientation. He also revealed his ongoing affair! Darren Criss has been in a relationship with his girlfriend Mia Swier since June 2013. Mia is a musician. Their relationship dates back a long time ago in 2010 when they were in a long distance relationship with Mia in California and Darren in New York.

When Mia finally came to New York in June, the couple officially announced that they were in a relationship. In the same year, the couple was seen in Dancing with the Stars which brought them even closer.

The couple is frequently seen together. The pair was spotted in the J.J Kennedy Airport looking cute in their warm clothes. Darren has also posted pictures of Mia on his Instagram account. More recently in 2016, Darren’s Instagram post had a selfie of himself with Mia and Hillary Clinton. The couple had been rooting for Hillary Clinton for the USA presidential elections.The couple has been in a relationship for so long. We wish the best for them.