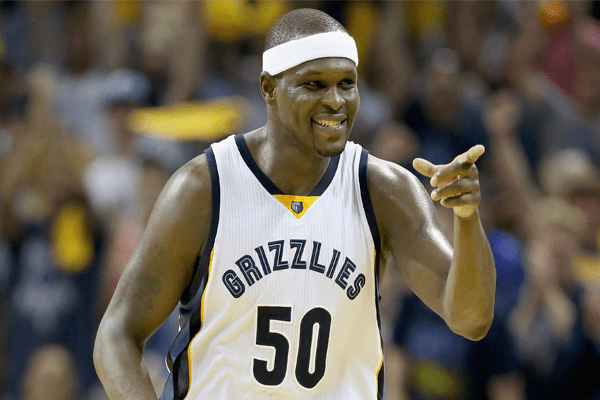 Zach Randolph, an American professional basketball player, is currently representing the team Sacramento Kings in the National Basketball Association (NBA). He is power forward in the team. Zach Randolph net worth is increasing due to the successful professional career. Full bio is given below.

Zach Randolph started his career from 2001 and is continuing till date. He played for 5 teams till date. Initially he teamed with the group Portland Trail Blazers (2001-2007) and subsequently New York Knicks (2007-2008), Los Angeles Clippers (2008-2009), Memphis Grizzlies (2009-2017) and Sacramento Kings (2017-present). He was drafted as 19th overall selected by the Portland Trail Blazers. Hence, Zach Randolph Net worth is increasing at the faster rate.

Zach Randolph was born on July 16, 1981 to mother Mae Randolph in Marion, Indiana. No information is available regarding his father. He was born and raised along with three siblings named Roger Randolph, Kelly Randolph and Tomika Randolph.

While growing up in Marion, Zach studied in Marion High School and was coached by Moe Smedley. As a high school student, he led the Marion to 1998 Indiana Class 4A Championship Game. Besides that he led his team to the State Championship game through which the school enlisted in the seventh basketball championship.

Completing high-school education, Zach enrolled to Michigan State University and played basketball under the instruction of Coach Tom Izzo. During his period in Michigan he achieved 10.8 points and 6.7 rebounds per game over 33 games. He completed the session with 28-5 record. And straightly advanced his team to third in the NCAA Final Four. Thus he entered 2001 NBA draft.

Drafted by the Blazers in the first round (19th overall) in 2001 and enlightening his college career he placed in the Power forward position. He signed a 6 year contract valued $84 million extension with the Blazers after winning NBA’s Most Improved Player Award in 2004. Randolph averaged  10.1 rebounds and 23.6 points per game in 2006-07 season. Next, he achieved 16.0 points and 7.7 rebounds in average  against Portland in six season.

On June 28, 2007, Randolph was traded to New York Knicks for Steve Francis, Channing Frye and 2008 2nd round draft pick under draft day deal along with his teammates Dan Dickau, Fred Jones and Demetris Nichols.  He went through 69 games with Knicks during 2007-08 season. He averaged a double-double with 17.6 points and 10.3 rebounds per game. Despite of that, he went through 11 games in New York before his trip to Clippers in 2008-09 season. That time Zach averaged 18.0 points and 10.6 rebounds per game.

After 2008-09 season, Randolph dealt to Los Angeles Clippers. Along with Mardy Collins in place of Cuttino Mobley and Tim Thomas.

On February 17, 2009 while competing against Phoenix Suns, Randolph was ejected and eventually suspended for his immoral act against Louis Amudson.

He punched Louis Amundson, member of Phoenix Suns, in his jaw.

He completed his game before being traded again and averaged 20.9 points and 9.4 rebounds per game.

On July 17, 2009 he again got traded to Memphis Grizzlies in exchange of Quentin Richardson. There he got selected for his first NBA All Star Game in 2010. Firstly he could not make it to the 2010 playoffs. However he helped the Grizzlies to an improvement.

They “Grizzlies” made the Playoffs in 2011 as the eight seed. By eliminating the top-seeded San Antonio Spurs in the very first round. Thoroughly the series marked the first four win in Franchise playoff history for the Grizzlies. Along with this, the series created a history as the first time the Franchise won a playoff series.

On April 18, 2011, Zach made a four-year agreement with the Grizzlies worth $71 million with $66 million guaranteed. Successively, he got his name to the All-NBA Third Team for the first time.

He then led Grizzlies to an opening win in their second-round playoff series. Defeating Oklahoma City Thunder 114-101 and scoring 34 points. After losing game 7 with Thunder they fell in the second round.

In 2012, Grizzlies faced Los Angeles Clippers in the first round of the playoff. But they lost the series in seventh game.

Again during 2012-13, Randolph named to second All-Star game. On May 15, 2013, he helped Grizzlies to victory over Oklahoma City. He then successively created a new history in the Western Conference Finals. He scored 28 points and 14 rebounds against Thunder.

In 2013-14 season, through the 4th quarter of game 6,Zach got suspended for game 7 for his punch to Steven Adams in the jaw.

On June 30, 2014 Randolph exercised and signed two-year contract worth $20 million extension with the Grizzlies. But he failed to NBA Championship, Golden State in the conference semifinals.

On March 19, 2016, Randolph won over the Los Angeles Clippers scoring triple-double with 28 points, 11 rebounds and 10 assists in a 113-102. Again the team listed as qualified for the NBA playoff in 2016 but unluckily they got swept out in the first round by the San Antonio Spurs.

Following the death of his mother on November 24 he missed seven games and lastly returned to his team competing against Philadelphia.

Lastly on July 10, 2017, Zach Randolph signed two year contract worth $24 million with the Sacramento Kings. Prior to his contract to Kings Grizzlies made a statement clarifying- would never be worn again and would eventually be retired in the future.