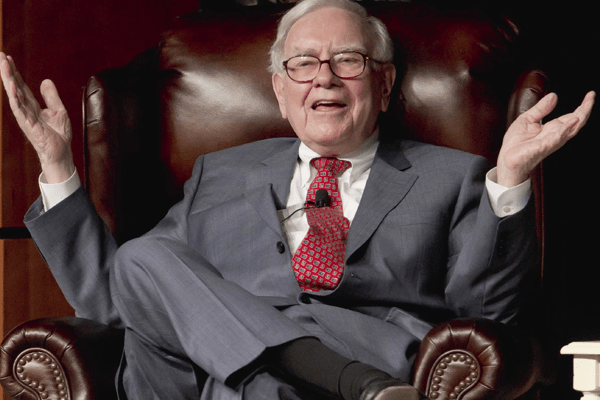 The investment expert, Warren Buffett quotes have inspired a million living souls aspiring to grow as rich and respected businessman like him.

Warren Buffett is an American business magnate, investor, philanthropist and CEO/President/Chairman of Berkshire Hathaway. As of 2017 report, he is the second richest person in the USA and fourth richest in the world netting $77 billion. Smart from the young days, he started investing in business and formed Buffett Partnership Ltd. In 1956. Warren Buffett quotes have therefore aspired many young people to become a similar businessman like him.

Warren Edward Buffett was born on August 30, 1930 in Omaha, Nebraska. He was born to a stockbroker father, Howard and a homemaker mother, Leila Stahl Buffett. His father later went to serve as a U.S. Congressman. Buffett was born as the second of the three sons.

From the young age, Buffett held huge interest in finances and business matters. The talented student with numbers, Buffett demonstrated it from his childhood days.

When he was a child, he would often pay a visit to his father’s stockbrokerage shop. Going there, he would write the stock prices on the blackboard. When he was only 11 years old, Buffett made his first investment. He bought three shares of Cities Service Preferred, spending $38 per share. This act does not come as a surprise when we now hear Warren Buffett quotes and his endeavor.

The stock price later dropped to $27. However, Buffett waited for the stock to raise until $40 and then sold his shares. He received small profit selling the shares but soon he regretted as the price skyrocketed to $200 per share. Buffett recalls this event as a lesson that taught patience in investing.

When Buffett turned 13, he started his own business. He worked as a paperboy and sold his own horseracing tip sheet. Soon, his father got elected to the US House of Representatives in 1942. Consequently, the Buffett family moved to Virginia.

Buffett attended Woodrow Wilson High School in Washington where he continued to generate income through business plotting. When he was in high school, he and his friend bought a used pinball machine. It cost them $25. The two high school buddies installed the machine in a barbershop.

Eventually, they earned enough profit to buy another machine in a few months. Soon, Buffett had the machine installed in three different locations. Later, he sold the business for $1200. Long before Warren Buffett quotes reached people, Buffett had laid the foundation of his success.

Buffett later went to the University of Pennsylvania where he studied business. However, he transferred to the University of Nebraska after spending a couple of years there. He finished his university at the age of 20. Moreover, he had already garnered already $10,000 by the time he finished his university education. Buffett earned the amount through his childhood businesses. It is not only Warren Buffett quotes but also his works and smart work that has inspired many businessmen.

In 1949, he got an inspiration from Benjamin Graham’s book The Intelligent Investor. Therefore, he enrolled at Columbia Business School to study under popular investor and economist. From there, he earned his master’s degree in the year 1951.

After completion of master’s degree, Buffett sold securities for Buffett-Falk & Company. Three years later, he worked as an analyst at Graham-Newman Corp for a couple of years.

Leaving the work of analyst for his mentor, he formed Buffett Partnership Ltd. in 1956. The firm was located in his hometown Omaha, Nebraska. There, he got to utilize the techniques he learned from Graham-Newman Corp. Consequently, he became a successful person in identifying undervalued companies. Warren Buffett quotes encourage other businessman to succeed, but his works serves as an epitome of success.

It did not take much time for Buffett to become a millionaire. Berkshire Hathaway, a textile company, was one enterprise that Buffett valued. Soon, he began accumulating stock and earned assumed control of the company.

Building Up an Empire

Buffett Partnership was growing successfully; however, its founding members dissolved the firm in 1969. They rather focused on the development of Berkshire Hathaway. Buffett also focused on expanding the company. For this, he bought assets in media, insurance and oil.

During the similar timeline, Berkshire Hathaway invested in Coca-Cola. After this investment, Buffett became the director of the company from 1989 to 2006. Similarly, he has served as director of a number of other companies including Citigroup Global Markets Holdings, Graham Holdings Company and The Gillette Company. Warren Buffett quotes also gives the reflection of his thoughtful work and tactics like these.

The rich business magnate, Warren Buffett quotes about investment and success are not the only things in his life that he considers valuable. He has also invested in causes that brings joy in others’ lives.

In 2006, Buffett made an announcement to give up entire fortune to charity. He made a commitment of 85% of the earning to Bill and Melinda Gates Foundation. It was the largest act of charitable activity in the history of the United States.

In 2013, Buffett purchased H.J. Heinz for $28 billion. The company merged with Duracell and Krafts Foods Group in 2015. As a result, the merged company turned into North America’s third largest food and beverage company.

Further, Buffett launched Drive2Vote in 2016. It was the website that aimed to encourage people in Nebraska community to utilize their voting right. In addition, the site also assisted people to register and drove voters to polling location in case if they needed one.

Buffett has been the supporter of Democratic nominee Hillary Clinton. He challenged the Republican nominee, Donald Trump to meet their tax return.

Personal Life, Recognition and Net Worth

Buffett revealed about his illness and diagnosis in 2012. He had been diagnosed with prostate cancer and had been undergoing radiation treatment. He completed the treatment in late-2012.

The rich businessman married Susan Buffett in 1953 with who he has three children: Susie, Howard and Peter. He got infatuated to Susan whose then-boyfriend played ukulele. In an attempt to impress Susan, he bought ukulele and played it. Since then he has been playing it and this attempt led to their marriage. However, they began living separately in 1977. The couple remained married until Susan’s death in 2004.

In 2006, Buffett married his longtime companion, 60-years-old, Astrid Menks. She had lived with Buffett since his separation with Susan. The three, Susan, Buffett and Menks, were close enough that their Christmas cards were signed “Warren, Susie and Astrid”. Susan had arranged meeting of Astrid and Warren before she left to pursue her singing career.

Forbes magazine ranked him towards the top in the World Billionaire List. The second richest person in America and fourth richest in the world, Warren Buffett has net worth of $77.6 billion according to the 2017 record.

Tags: second richest person in the USA and fourth richest in the world, World richest man

Join me on Saturday at 10a ET for the first ever #BRKLiveStream on @YahooFinance https://t.co/u2wsogF7zn pic.twitter.com/RPKqhniVTD