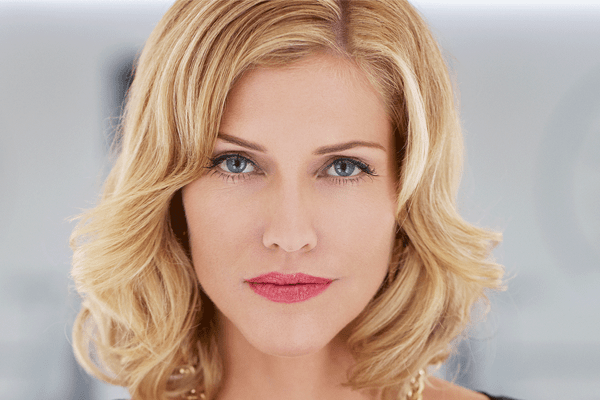 Canadian model and actress, Tricia Helfer net worth has been amassed from her work in the fashion industry and also in the acting arena. Tricia Helfer Lucifer appearance has brought her back to the limelight.

Tricia Helfer is a phenomenal Canadian model and actress. Tricia Helfer net worth is high and accumulated from her triumphant career in the modeling as well as the acting arena. Tricia Helfer Lucifer role as Charlotte Richards has been positively picked up by the viewers. The details of the incomparable, Tricia Helfer IMDB profile, net worth, husband, and more can be found on various social media sites.

Tricia Janine Helfer was born on April 11, 1974 in Donalda, Alberta, Canada. She was born to parents Dennis and Elaine Helfer.

Tricia Helfer went on to attend William E. Hay Composite High School based in Stettler, Alberta. She spent most of her childhood days with her sisters, Trinna, Tammy, and Tara. Tricia comes from a German, English, Swedish, and Norwegian descendant. Tricia began her career by joining Ford Models’ Supermodel of the World contest and winning it in 1992.

Tricia then began working for Ralph Lauren, Versace, Chanel, and Giorgio Armani. She has walked the ramp for top names in the fashion industry. Tricia has graced the covers of magazines, Flare, Amica, ELLE, Cosmopolitan, Marie Claire, Vogue, and more. She has also been seen in the February 2007 issue of Playboy. She retired from her modeling career in 2002.

Tricia Helfer made her movie debut in 2003’s movie, White Rush as Eva. Since then she has been seen in movies like ‘The Genius Club’, ‘Memory’, ‘Spiral’, ‘Walk All Over Me’, ‘Open House’, ‘A Beginner’s Guide to Endings’, ‘Bloodwork’, and more. However, her most significant role in the movie arena is as Boodikka in Green Lantern: First Flight, and as Sigrid Hagenguth in Authors Anonymous.

Tricia Helfer has also been seen in numerous TV series. Helfer made her debut in the TV arena in 2002 as Sarah in TV series, ‘Jeremiah’. She has appeared as the main role in 73 episodes of Battlestar Galactica as Number six, recurring role in 8 episodes of Burn Notice as Carla, three episodes of The Spectacular Spider-Man as Felicia Hardy/Black Cat, Two and a Half Men, Dark Blue as Alex Rice, The Firm, Criminal Minds, Husbands, Tron: Uprising as The Grid, Killer Women as Molly Parker, and more. Helfer has made significant appearances in TV movies like Behind the Camera: The Unauthorized Story of Charlie’s Angels as Farrah Fawcett, Battlestar Galactica, Them, Dangerous Intuition, Scent of the Missing, Operation Christmas and more. Tricia Helfer Lucifer appearance as Charlotte Richards has been largely applauded by the audience. She has also been seen as a regular cast on Powers as FBI Special Agent Angela Lange/Lynx.

Tricia Helfer has been honored many times for her exceptional work in acting and modeling. Helfer has won awards like Leo Awards, and Grand Jury Award in Playhouse West Film Festival. She has been nominated for two Scream Awards, a NewNowNext Award, two Leo Awards, and a Behind the Voice Actors Video Game Voice Acting Award. She has also been in a PETA campaign and involved in various animal rescue events. She is also the co-founder of ‘Acting Outlaws’ which is a charity website.

Tricia Helfer IMDB profile has various details of her personal as well as professional life. The biography of the renowned and talented, Tricia Helfer can be found on various social media sites like IMDB, Wikipedia, twitter, Instagram, and more.

I can see why it gave you a laugh! https://t.co/M6Gnrpc6Dq