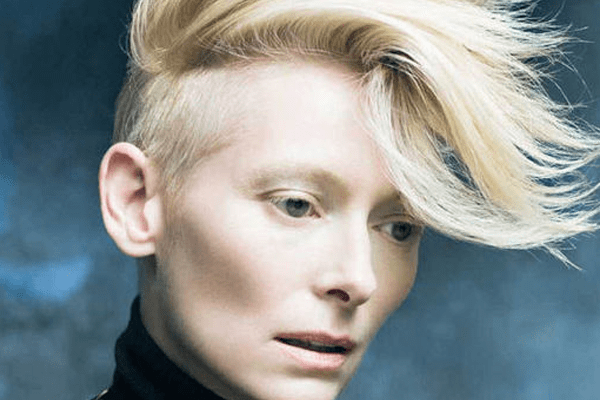 Tilda Swinton Oscar winner is for Best Supporting Actress role of Karen Crowder in Michael Clayton. She is a typical challenger for difficult roles.

Tilda Swinton is the winner of BAFTA Award and Academy Awards for Best Supporting Actress Role of Karen Crowder in Michael Clayton in 2007.  In 2011, Tilda won European Film Awards Best Actress in a role for the movie We Need to Talk About Kevin. She in 2008 and 2017 won Saturn Awards Best Supporting Actress Role for The Curious Case of Benjamin Button and Doctor Strange.

Tilda was born Katherine Matilda Swinton on November 5, 1960, in London. She is the only daughter of 4 children from Judith Balfour and Sir John Swinton. Swinton is sister to three brothers. Her father is a retired major-general in the British Army and served as Lord-Lieutenant of Berwickshire for 11 years. Swinton is a family with Anglo-Scots ancestry with land ownership and lineage even before the Norman Conquest in Britain.

Swinton’s foundations of education were laid in three independent schools: Queen’s Gate School in London, West Heath Girl’s School, and also Fettes College. West Heath being expensive boarding school let her be a classmate and friend of Princess Diana. She spoke as an adult against boarding schools to be lonely and isolated in a setting. The environment she thinks is very cruel to grow up and unfit for learning.

In 1983, Tilda Swinton graduated from New Hall (Known today as Murray Edwards College) of the University of Cambridge. Swinton holds a degree in Social and Political Sciences. In Cambridge, she joined the Communist Party and changed to Scottish Socialist Party later. Tilda Swinton Oscar foundations were formed at the college with the stage performances.

Tilda’s first appearance was in Measure for Measure for Royal Shakespeare Company in 1984. She afterwards works in Mann ist Mann for Traverse Theatre, Edinburgh in 1987. The play was written by Manfred Karge. A year back Tilda Swinton appears as Julia in 1986 television series Zastrozzi: A Romance based on the Gothic novel by Percy Bysshe Shelly. The same year she appears in the big screen movie Caravaggio in 1986 with a direction from Derek Jarman.

Tilda Swinton staying in Edinburgh works in many films of Derek’s films like The Last of England, War Requiem, Edward II in 1987, 1989 and 1991. She gets the Volpi Cup for Best Actress at 1991 Venice Film Festival for her role in EdwardII.

In 1989 she performed an art piece, Volcano Saga by Joan Jonas. The art piece was based on a thirteenth-century Icelandic Laxdeala Saga. The basic essence of the piece was of a woman whose dreams tell of the future. Swinton then plays the title role in Orlando based on the novel by Virginia Woolf from the director Sally Potter. The movie according to Swinton explores the possibilities of gender presentation on the screen, especially androgynous gesture.

By 2001, Tilda Swinton entered the mainstream projects taking the lead role in an American film The Deep End as a mother of a gay son with suspicion of killing his boyfriend. She gets a Golden Globe nomination for the movie. Tilda started as a supporting actress in The Beach (2000) along with Leonardo DiCaprio.

She continues to do supporting roles in Vanilla Sky (2001) with Tom Cruise and the archangel Gabriel in Constantine (2005) together with Keanu Reeves. Tilda did not make British films untouched by her ability by then. She appears in The Statement (2003) and Young Adam (2003).

In 2005, the mainstream blockbuster movie The Chronicles of Narnia: The Lion, the Witch and the Wardrobe she justifies the role of the White Witch Jadis. Tilda Swinton again performs a challenging role of Audrey Cobb in novel adaption movie Thumbsucker by Mike Mills.

In 2007, Tilda  was awarded Oscar for Best Performance by an Actress in a Supporting Role in Michael Clayton as Karen Crowder. The Oscar becomes only Oscar award for the movie. Swinton bags BAFTA for the movie the same year.

Swinton next appearance in 2008 was the movie Burn was After Reading and The Curious Case of Benjamin Button. The year her movie appearance in Julia premiers at the 2008 Berlin International Film Festival and releases in the US for short time in May 2009.

In 2011, Swinton stars as a mother of a child committing a high school massacre in We Need to Talk about Kevin a movie adaptation of the novel. She shoots for the vampire movie Only Lover Left Alive along with John Hurt and Tom Hiddleston in 2012.

Tilda Swinton then appears in Snowpiercer of Science-fiction genre in 2014. In the thriller A Bigger Splash she presents opposite Matthia Schoenaerts and Ralph Fiennes in 2015. In a Marvel Cinematic Universe of 2016, Doctor Strange Tilda Swinton portrays the Ancient One. The movie Suspiria remake ends it shooting in March 2017 and she is the part of the movie.

Tilda Swinton at various instances performs a live art. She was on display in the Serpentine Gallery, asleep of apparently asleep for a week in 1995. The sources say, the piece is a collaborative effort of her and friend/producer Joanna Scanlan and sometimes wrongly credit goes to Cornelia Parker.The performance art piece gets installation in 1996 at the Museo Barracco in Rome and at the Museum of Modern Art in New York in 2013 and gets a name The Maybe.

She collaborates with fashion designers Viktor & Rolf for the focus of their One Woman Show in 2003. The peculiar with models appear as copies of Swinton and cites a poem ending with the line “There is only one you.  Only one”

The other career scenes include her being the jury at the 38th Berlin International Film Festival, 18th Moscow International Film Festival. Swinton made appearances in music videos for a name Orbital’s “the Box”.  She opens Screen Academy Scotland a production centre in Edinburgh, 2006. Tilda founded the film festival Ballerina Ballroom of Cinema of Dreams in 2009. She organized travelling independent film festival in 2009 in Scottish Highlands.

Swinton lives with her current partner Sandro Kopp a German painter in Nairn, overlooking the Moray Firth in the Scottish Highland region. She has twin children Honor and Xavier Swinton Byrne from her former partner John Byrne. Tilda Swinton has the net worth of $10 million.