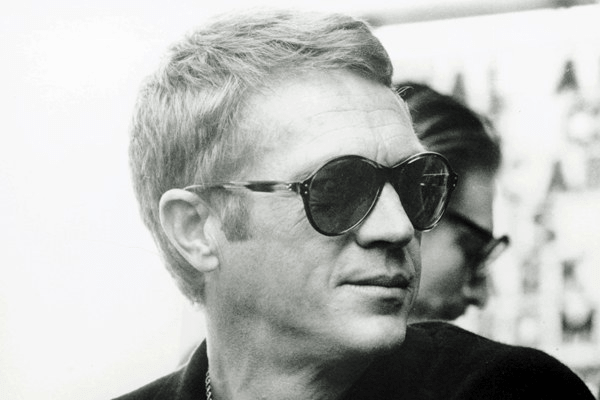 Steve McQueen movies like The Sand Pebbles and The Great Escape earned him Academy Award nomination and Best Actor Moscow International Film Festival. An enthusiast of motorcycle and car race performed many of his stunts in the movies like Bullitt.

McQueen was first of all United States Marine Corps promoted to private first class with an assignment to an armoured unit after 1947. His acting career started with uncredited roles in Girl on the Run, Somebody Up There Likes Me in 1953 and 1956. Steve McQueen movies are characteristics features of his innovating notions of the glamour of acting. This even earned him an Oscar nomination for Best Actor in a Leading Role in The Sand Pebbles in 1967.

The full name of Steve McQueen is Terence Steven McQueen and was a son of William Terence McQueen and Julia Ann. He was born on March 24, 1930, at St. Francis Hospital in Beech Grove, Indiana, a suburban locality of Indianapolis. Steve’s father left his mother Julia six months after meeting her for her alcohol addiction.  His mother’s inability to care a small child left him with his grandparents Victor and Lillian in Slater, Missouri in 1933. The Great Depression 1930s forced his grandparents to stay along with Lillian’s brother Claude in Slater.

McQueen grew up as a Catholic in the farm of Uncle Claude. He even credits his passion for racing to gift of a red tricycle on his fourth birthday by Uncle Claude. McQueen at the age of eight was taken to Indianapolis by his mother. His mother was married to another person at the time. McQueen still remembers the departure gift from his uncle Claude a gold pocket watch with an inscription in it. The inscription was a reference to McQueen as a son by Claude.

He was as a child Dyslexic and partly deaf as a result of an ear infection. McQueen’s such physical inabilities he was unable to properly adjust to his new life. In addition, the beatings from his stepfather caused him to leave home at the age of nine and live on the streets. Eventually, he ran along with a street gang and committed petty crimes. His mother sent him back Slater without being able to tame him.

3 years later McQueen’s mother Julia again wrote a letter to Claude asking him to send her son to live along to live with her in Los Angeles. The reason was the failure of her second marrage and her marriage for third time. The life of McQueen in Los Angeles was similar the life in Indianapolis and he became a rebel again. He was sent again to live with his Uncle Claude again. At the age of 14 McQueen left Slater without saying goodbye to Claude and endorsed into a circus for a time. He was again back to his mother and stepfather in Los Angleles and to gangs as well as petty crimes.

The threat persuaded McQueen’s mother to sign a court order brought by his step father. The order declared him untamable and put him in remand to the California Junior Boys Republic in Chino. The maturity in McQueen flourishes without being popular with the other boys at first. Subsequently, he was accepted by them along with the chances to see movie in the town. Soon, he was Boys Council elected leader and a role model among the boys. McQueen left the Boys Republic at age 16 and retained lifelong association even after being famous.

McQueen at 16 returned to his mother living in Greenwich Village, New York to that instance. The same period he met two sailors from the Merchant Marine. McQueen instantly volunteered to serve on a ship bound for the Dominican Republic. The post of volunteer in the ship was dropped out by him once he was in Dominican Republic and joined a job in brothel. McQueen was temporary in all the jobs he took and travelled along his way to texas changing his jobs. During the period he took the jobs as a roughneck, a carnival barker and a lumberjack.

The United States Marine Corps in 1947 took him and was promoted to private first class eventually and got into an armored unit. In the beginning McQueen was as wild as before and took demotion to private for seven times. The same period he was absent unauthorized for two weeks and was caught by shore patrol. The resistance to arrest led him to 41 days in the brig. McQueen then focused his concentration on self-improvement and embraced the Marines’ discipline.

In the meantime he saved the lives of other Marines during an Arctic exercise, pulling the marines out of a tank before it broke through ice into the sea. Consequently, he was assigned to the honor guard, responsible for guarding then US President Harry Truman’s Yacht. McQueen was a honor guard till 1950 and was honorably discharged with a personal satisfaction.

McQueen took acting class in NewYork at Sanford Meisner’s Neighborhood Playhouse in 1952. His first dialogue was “Alts iz farloyrn.” (“All is Lost”) in a stage play produced by Yiddish theatre in which Molly Picon was a star. McQueen in the same period was a student of Stella Adler and in her class he met Gia Scala. Steve McQueen movies are filled with all the skills taught there.

To earn money he competed in weekend motorcycle races at Long Island City Raceway and Harley-Davidson was among the first bought a motorcycle.  In the period 1953-1954, McQueen appeared as a musical judge in an episode of ABC’s Jukebox Jury.

In 1955 he went to locality of Echo Park and searched for job in Hollywood at the age of 1955. McQueen gave appearances in The Defenders of Westinghouse Studio One presentations of two part television. He was noticed at the time by manager of McQueen’s first wife, Neile. McQueen Lands a minor role in B-Movies at first in Somebody Up There Likes Me. Eventually he lands on a role of The Blob in the film Never Love a Stanger and in another movie The Great St. Louis Bank Robbery.

McQueen had a break role in television series, Tales of Wells Fargo by Dale Robertson in NBC western. He continued to appear in the television roles like Trackdown and did a pilot episode of series titled Wanted: Dead or Alive. Consequently McQueen landed on the role of Randall. He went to do Steve McQueen movies like Never So Few, The Magnificent Seven in 1960. The instant hit of The Magnificent Seven caused him to withdraw from the role in Wanted: Dead or Alive. An era of Steve McQueen movies started with the hit.

McQueen in 1963 took a lead role in big Sturges with one of Steve McQueen movies titled The Great Escape making him a superstar.  Three years later The Sand Pebbles earned him the single Academy Award Nomination in 1966. McQueen then in 1968 a massive box office hit Bullit did his own close-up scene stunts.

The 1970s in the life of Steve McQueen came as a star. The Steve McQueen movies like Le Mans, Junior Bonner, The Getaway, Papillon earned him a title of the highest paid actor. The rolling stones band referred McQueen in their song with the star’s permission. He continued to do films like The Towering Inferno and An Enemy of the People. In the late 1970s, McQueen played in the movies based on true stories like Tom Horn and The Hunter.

During his time he missed much might to be blockbuster Steve McQueen movies like Breakfast at Tiffany’s, Butch Cassidy and the Sundance Kid, The Driver, Grand Prix and Close Encounters of the Third Kind. McQueen’s passion to motorcyles and race car offers him to perform his stunt by his own. He even participated in the British Touring Car Championship in 1961. He even competed in many top off-road races like Baja 1000, the Mint 400, and the Elsinore Grand Prix. McQueen bought high capacity motorcylcles and cars like Porsche 917, Porsche 908, Ferrari 250 Lusso Berlinetta and many more.

His first date was Gia Scala. He then married Neile Adams on November 2, 1956 hada daughter Terry Leslie on June 5, 1959 and a son Chad on 28th December 28, 1960. The couple divorced in 1972. The following year McQueen married actress Ali MacGraw and ended in divorce in 1978. Then in 1980 McQueen married model Barbara Minty.

McQueen was regular on physical exercise. But, he also was a regular user of Marijuana. Again he had unusual reputation for demanding free items in bulk from the studios in agreement to sign films. McQueen used to donate the items to the Boys Republic reformatory school which was later discovered. He was a life long evangelical Christian and attended Ventura Missionary Church.

In the late 70s McQueen developed a chronic cough. He stopped smoking and underwent on medication of antibiotics but condition became worse. Right after the shooting of the movie The Hunter, biopsy report revealed pleural mesothelioma. The cancer was associated to asbestos exposure without cure. The surgery of abdomen and neck was operated and consequently died of a cardiac arrest at night November 7, 1980.