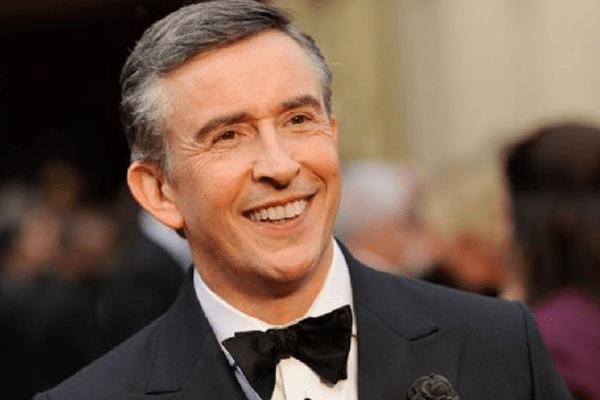 Steve Coogan is a famous stand-up comedian and actor from England. He is also a writer, producer and impressionist. He had done many movies and TV shows and showed his versatility in acting as well as his voice, although he is best known for the role of Alan Partridge which he portrayed in Alan Partridge: Alpha Papa.

Coogan’s birth date was on 14th October 1965. His real name is Stephen John “Steve” Coogan. His birth place is Middleton in Greater Manchester, England. His mother’s name is Kathleen and his father’s name is Anthony Coogan who profession was engineering and worked at IBM Company. He was born and raised in a family of Roman and Irish descent. He has 6 siblings that include sister Clare Coogan and brothers Martin and Brendan Coogan. He was raised up in He obtained his early education from Cardinal Langley Roman Catholic High School. He had applied for the education of theatre in different drama schools but finally got official knowledge of acting in Manchester Metropolitan School of Theatre. From his early life, he had an interest in acting and comedy. He dreamt of being an impressionist and a comic from childhood. He was born in working class family who helped him being raised happily and fulfilling and inspiring his interests. He used to perform in dramas and stage shows in various programs during those days in school and college. He got a lot of appreciation and praise for his work as an impressionist and performer already from those days.

His career started when he used to perform in Ipswich on a regular basis, where he performed as a comic and impressionist. Then extending his career forward, he worked for advertisements in television giving his voice for them and voice of different characters for the show Spitting Image during 1988 to 1992. Spitting Image show used puppets for expressing satirical contents on political and social subjects.  He also used to perform with John Thomson and also appeared in Granada TV sketch show with John Thomson and Caroline Aherne known as The Dead Good Show in 1992.

He performed as different characters in the show and the most famous were Pauline, Mancunian and Paul Calf. He also appeared in the minor role of youth in movie Resurrected in 1989 but got an official entry in films when he performed in the movie The Indian in the Cupboard in 1995 as Tommy Atkins. In the year 1993, he appeared in few episodes of TV shows and series. His roles in those series include Lead singer of Go West in The Smell of Reeves and Mortimer, Stebbings in Harry and Paul Calf and Pauline Calf in Saturday Zoo. He also worked as a writer and in various characters in different episodes of show The Day Today in 1994 and Coogan’s Run in the year 1995 as well as the role of Alan Partridge in Knowing Me Knowing You with Alan Partridge from 1994 to 1995.

Being impressed by his performances in his early movies and TV series and shows, he was able to grab the attention of audiences and filmmakers. He was approached for different performance and got involved in big projects as well. He showed his versatility of acting skills playing as different roles and mostly giving his voice for different characters in various movies. His other movies, he has been involved in, throughout different years can be listed as:

1998 – He did the roles of Bruce Tick in Sweet Revenge film also known as The Revengers’ Comedies.

2001 – He was a writer as well as in the role of Simon Garden in the movie The Parole Officer.

2003 – He appeared as himself in the Cousins segment of the anthology film Coffee and Cigarettes which featured 11 short stories.

2004 – He gave the voice for the character snake named Heston in Ella Enchanted and seen doing the role of Phileas Fogg in film Around the World in 80 Days.

2005 – He appeared as Charley in the movie Happy Endings which was a hit and liked by people and critics. He also worked as the characters Walter Shandy, Steve Coogan and Tristram Shandy in movie A Cock and Bull Story.

2006 – He was seen performing the role of Ray Elliot in DVD movie The Alibi and in the role of Ambassador Mercy and Florimond Claude in Marie Antoinette. He worked as the exhibit character as Roman General Octavius in the movie Night at the Museum.

2007 – He played the character Graham in the film For The Love of God and an uncredited role of Metropolitan Police Inspector in Hot Fuzz.

2008 – He appeared as Dana Marschz in Hamlet 2, as Michael Henry in Finding Amanda, as Damien Cockburn in Tropic Thunder and gave the voice of Roderick for movie Tales of the Riverbank.

2009 – He was involved in the movie What Goes Up as producer and as the character Campbell Babbitt, as Paul Michaelson in the film In the Loop. He reappeared as the same character of Octavius in Battle of the Smithsonian titled sequel of Night at the Museum.

2010 – He did the role of Hades in Percy Jackson & the Olympians: The Lightning Thief and the role of David Ershon in the movie The Other Guys. He gave the voice of the character Raisin in movie Marmaduke.

2011 – He appeared as Steve Coogan in The Trip and as Dylan in Our Idiot Brother.

2013 – In this year, he was involved in different movies portraying different roles. The characters and the movie names are:

Along with the different series and shows as Spitting Image, The Dead Good, Saturday Zoo, Harry, Coogan’s Run, The Day Today, Knowing Me and much more, he has been actively making up his career in television as well since 1988 and active till now. He has appeared and performed different roles and worked for different characters in various shows and series throughout different years can be listed as:

1996 – He appeared as Danny Skaggs in Tales from the Crypt.

1998 – He worked for various characters in Bob and Margaret and for the character Gnat in Alice Through the Looking Glass.

1999 – His voice was used for the character named Blitzen in Hooves of Fire and appeared as well as gave the voice for 6 episodes in TV series Mrs Merton and Malcolm.

2002 – He was an executive producer and appeared as Nick Lee in Cruise of the Gods and recorded voice for the character Blitzen in Legend of the Lost Tribe. He also appeared as himself in different episodes of Top Gear in this year as well as in 2004 and 2006.

2004 – He gave the voice for different characters and was an executive producer also in series I Am Not an Animal.

2005 – He was also involved as executive producer and portrayed few characters in Monkey Trousers.

2006 – He appeared as Pilot in an episode of Little Britain. He was a writer and executive producer and in the character of Tommy Saxondale in Saxondale from 2006 to 2007.

2008 – He appeared in 3 episodes of Sunshine as Bing Crosby.

He was seen as Steve Coogan in the television show The Lost Honour of Christopher Jeffries in 2014 and in 10 episodes of Happyish as the character Thom Payne in the year 2015. Recently he had also worked for movies as well. He appeared as Steve Coogan in the movie The Trip to Italy and as Octavius in sequel named Secret of the Tomb of movie Night at the Museum and as Mr. Banks in northern Soul in 2014. In 2015, he gave the voice for a tower guard and the character Professor Flux in comedy animated movie Minions. In 2016, he worked for the role of Johan Webber in film Shepherds and Butchers and the role of Colonel Nigel Briggs in movie Rules Don’t Apply. In the same year, he also gave the voice for the character Ozone/Reginald in the movie The Secret Life of Pets. He has also been involved in the upcoming projects in different movies and television series which are under production and being released and aired in near future. He is busy in shooting for the movie The Dinner in the role of Paul Lohman and movie Ideal Home which are scheduled to be released in 2017.

Other Works and Involvements

With his appearance in television and movies, he also worked as a stand-up comedian and in different stage shows and plays. He also went for stand-up tours in different years in various places. His stand-ups had also been released in different years. In 1994, Live ‘N’ Lewd title stand up was released and in 1998, The Man Who Thinks He’s It and in 2009, another standup was released titled as Alan Partridge as well as other characters. He had also kept himself involved in writing. He wrote for different movies and series for different characters. He is also active in production works. He had worked as executive producer and co-produced for different shows and films including an online sitcom. Besides acting, he had worked for different organisations and charity programs for helping needy people. He has also worked for different advertisements and videos.

He had received different awards and nominated as well for his incredible performances. He has won millions of hearts and people have highly appreciated his work. He has been approached for huge projects as he has been able to grab the attention of coworkers and filmmakers. The awards and nominations by year are listed as:

1992– He won Perrier Comedy Award for In Character with John Thomson in the category of Best Comedy Show.

1994 – He won British Comedy Awards for Knowing Me Knowing You as Best Male TV Performer.

1995 – He was nominated for Best Comedy Performance category for Pauline Calf’s Wedding video and Best Light Entertainment Performance for Knowing Me Knowing You in BAFTA Awards.

2002 – He was nominated for the Best New Comer for The Parole Officer during BAFTA award.

2005 – He was nominated for Supporting Actor in Satellite Awards for the role in Happy Endings.

2011 – He won the BAFTA award for the category of Best Male Comedy Performance for The Trip.

2013 – He won Best Male Comedy Performance in BAFTA for Welcome to the Places of My Life of Alan Partridge series.

Coogan was raised in a working class family and passed his early life happily. He has good relations with his family members and siblings. Due to his charming personality and amazing talents many were attracted towards him especially female. There are no any pieces of evidence proving he had girlfriends or had been involved in a relationship during early life. He was married in 2002 to Caroline Hickman but due to some issues their relation couldn’t last long more than 3 years and ended in 2005 after they divorced. He has a daughter named Clare Coogan from the relation with Anna Cole. He also had relation with China Chow for 3 years. He also had dated Elle Basey during 2011 and he seems to be having current relationship with Cortney Love. He wants to keep his personal life covered in front of media and others, so there are less known facts about his life.

Facts, Body Measurements and Net Worth

Although Steve was born in Catholic family, he is an atheist. His zodiac sign is Libra. He was born in the United Kingdom and nationality is English. His ethnicity is white. He is 51 years old but has appearance younger than his age as he has maintained his body by exercises and balanced food and perfect outfits although his body measurements are not available. His height is 5 feet 8 inches. His profession is an actor, producer, writer and stand-up comedian. His net worth has been boosted to 12 million US dollars from his salary, advertisements and endorsements. His salary is expected to be more than 3.5 million US dollars. Talking about the political views, he likes Labour Party. He has got many followers on social sites like Facebook and Twitter through which he interacts with them.