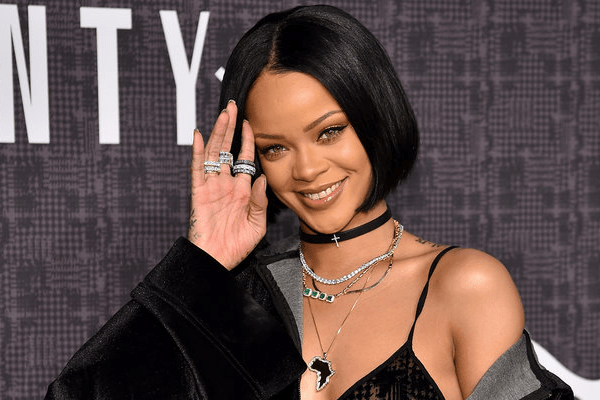 Rihanna is primarily a Barbadian Singer. But as of now, she is an International Pop Star. Besides, she is also a songwriter, fashion designer, model, and actress. Rihanna’s music genres are R&B, pop, hip-hop. Similarly, Def Jam, Roc Nation, SRP Westbury Road are her major labels. A soothing voice is a reason Rihanna songs are hit of all the times. Anti (2016) is her new album. And Bad Habit, Wild Thoughts, Just I, are the Rihanna’s latest song.

Rihanna, born on February 20, 1988, is the winner of Fashion Icon lifetime achievement award from the Council of Fashion Designer of America (2014). Also, she is the fourth most -powerful celebrity of 2012 as per Forbes. She also got listed among the 100 Most Influential People in the world (Times, 2013). She has first started her career through Def Jam records at the age of 16. And over the last decade, Rihanna is the most successful artist selling 62 million records since her early career. All People throughout the world are the crazy fan of Rihanna songs.

Rihanna was named as Robyn Rihanna Fenty during her birth on February 20, 1988, in Saint Michael, Barbados. Her father Ronald Fenty is a warehouse supervisor. And her mother Monica Braithwaite is an accountant. She has two siblings named Rorrey and Rajad Fenty. Also, she has two half-brothers and half-sisters from her father’s side.

Reviewing her educational background, she attended Charles F. Broome Memorial Primary School following Combermere High School. Earlier, she was an army cadet in a sub-military program. But with the flow of time, she turned her career into the music arena. She would never know that Rihanna songs would be most searched and loved by millions.

During her audition for the first time in 2003, she remained in the sight of Evan Rogers, an American record producer. Rihanna song left the positive impression on him. Thus, Roger invited her to his place (United States) to record some demo tapes.

The next year she recorded two demo tape “Pon de Replay” and “The Last Time.” Eventually, the tape later included in Rihanna’s debut album Music of the Sun.

After her demo’s shipment out to Def Jam Recordings, rapper Jay Z invited her to audition for the label. Jay Z was the newly appointed CEO of Def Jam of the time.

Then, she auditioned for Def Jam in New York in early 2005.  There she also got a chance to meet music mogul Antonio L.A. Reid. At the audition round, she sang Whitney Houston’s cover “For the Love of You” and her first demo tape “Pon de Replay” and “The Last Time.” After hearing her voice Jay’s boss, L.A. got impressed. Then, he uttered to Jay, “Not to let her go until the contract signed.”

So, Jay Z called a lawyer to draft up a contract. He wanted her not to sign with other labels.

Then, Rihanna also canceled her other meeting with other labels. In the meantime, she also shifted to live with Rogers and his wife from Barbados.

Successively, she completed her debut album after spending three months in the music industry. Her first demo tape Pon de Replay, later released as the lead single. It picked top five positions in fifteen countries and number 2 on the US Billboard Hot 100 and UK Singles Chart. Similarly, the single also reached number one on the Billboard Dance Club Songs.

Finally, her first debut album Music of the Sun released in August 2005. The album became commercial hit positioning at number ten on the Billboard 200. Also, the album earned a gold certificate from the Recording Industry Association of America (RIAA). The album grossed shipment of over $500,000 units and sold of two million copies worldwide.

The same year Rihanna released her second single “If It’s Lovin’ that You Want” was not as successful as her first single. But then, the single also picked top ten positions in several countries like Australia, Ireland and New Zealand.

Besides her musical career, she made her acting debut through the straight-to-DVD film Bring It On: All or Nothing in August 2006.

After the successful business of her first studio album, Rihanna then released her second album A Girl Like Me in April 2006. As like the first album, Rihanna songs in this album too picked number one position in Canada, numbered fifth in the United States and the United Kingdom.

Overly, the album listed at the top ten position in thirteen countries and led Rihanna to receive Platinum Certificate by RIAA.

Next, she came out with her first single “SOS.” The single picked number one position on the US Billboard Hot 100.

Continuously, she released her second single “Unfaithful.” The single also stands as the number one in Switzerland and Canada following top ten in eighteen different countries.

“We Ride” and “Break It Off” are the third and fourth singles of Rihanna songs respectively.

Receiving the positive feedback from the very beginning, she slightly increased up and boost her musical career. In total, Rihanna songs consist of 8 Studio albums, two compilation albums, 71 singles, two remixes and one reissue.

For knowing more about her musical career, you may visit Rihanna’s discography.

Similarly, she is best known for her music video We found love (2011) alongside Calvin Harris. The video picked MTV Video Music Award for Best Pop Video.

Is Rihanna only confined to the musical sector?

Not exactly! It’s true that Rihanna songs have made Rihanna famous. Rihanna is the versatile singer spreading her influence over the whole world. Rihanna is famous for her third album Good Girl Gone Bad (2007). Yes! She gained wide recognition through the musical career. But we could not entitle her just as a singer. Dynamic personality Rihanna is also an Entrepreneur, fashion designer, Philanthropist, actress.

Business and Other Ventures

Rihanna has more or less involvement in business and industrial sector. As of 2005, she came in contact with Secret Body Spray.

Accordingly, in 2010, she made numerous appearance in several commercials like Optus, Kodak, and Nivea. In 2011, she also listed the face of Vita Coco. Similarly, in 2013, Rihanna appeared with MAC Cosmetic. And she also made her participation in the “Made For Music” campaign alongside Jay Z.

In 2016, it is revealed that Rihanna would be releasing her music through her label Westbury Road Entertainment (2005).

Further, in 2017 Rihanna established cosmetic company Fenty Beauty under LVMH’s Kendo Brands. The first installment released on September 8, 2017. It was made available in more than 150 countries in stores and online. The company includes a product like foundations, bronzers, blotting sheets, blush compact, lip glosses, and so on. The product is especially targeted for all skin colors. The company also listed The 25 Best Invention of 2017 by Time Magazine.

A gorgeous lady Rihanna also foster her career in the fashion sector and started working in the clothing design industry. Then she presented several fashion collection enlisting herself as the first black woman to be the face of Dior (2015).

The next year, she also received the Footwear News’s coveted Shoe of the Year Award.

Also, she received the title of Fashion Icon Award at the 2014 Council of Fashion Designers of America.

Rihanna is a famous public image with the versatile character. She is also an activist. Rihanna along with several public figures, designed clothes to the diseases like HIV/AIDS for 2008 H&M Fashion Against AIDS line.

Moreover, Rihanna contributed to a cancer patient. And she has lot more contributions in social works.

In February 2017, she also honored as the Harvard University’s Humanitarian of the Year” by Harvard Foundation.

A successful professional career is paying a reasonable sum of money to Rihanna.

Thus, she is maintaining an adequate balance between private and professional life.

Rihanna is living a lavish and luxurious lifestyle.

At the present date, Rihanna is not dating anyone.

Besides her dating with Drake, she has several dating histories with several personalities.

Currently, she is devoting her full time to the musical career instead of focusing on her love-life. Rihanna songs are her major concern.

Rihanna has an ever-changing hairstyle and bright red color hair.

She has a beautiful green colored eye.

Rihanna has lots of tattoos on her body.