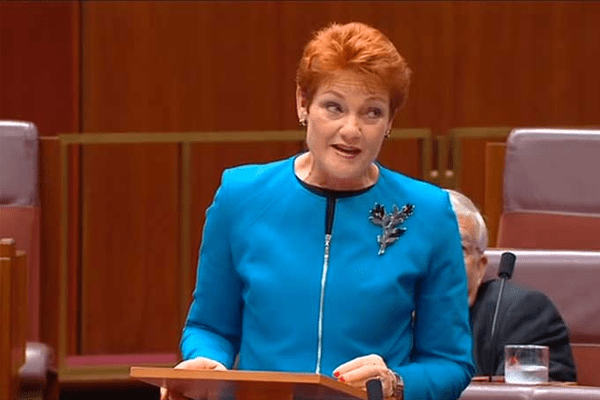 Pauline Hanson One Nation party senator is representing Queensland in Parliament of Australia. She is a politician with a career span starting as a member of Ipswich City Council in 1994.

She is the founder of Pauline Hanson’s One Nation Party in 1997. Hanson won as an independent candidate at the Division of Oxley in 1996 federal election. She lost in 1998 federal election but, continued to contest several state and federal election as One Nation leader as Pauline Hanson’s United Australia Party as well as an independent candidate. Pauline was on time expelled from one nation for electoral fraud and spent 11 weeks in jail prior to the appeal being heard. She joined One Nation in 2013 again and is now Senator representing Queensland with a win in 2016 Australian Federal Election.

On 27 May 1954 in Woolloongabba, Queensland Pauline Lee Seccombe was born as fifth children of seven children to her parents. She was born youngest daughter to John Alfred “Jack” Seccombe and Hannorah Aloysius Mary “Norah” Seccombe (nee Webster). Her primary education started at Buranda Girls’ School and later she attended Coorparoo State School in Coorparoo. She dropped out of school at the age of 15 with her marriage and pregnancy.

Pauline and her siblings began working at the family milk bar in Ipswich, Queensland. She used to prepare meals and take orders while working in the shop. The growing age made her assist her parents with more administrative work in bookkeeping and sales ledging.

Hanson left Woolworths and began working in the office administration of Taylors Elliotts Ltd, a subsidiary of Drug Houses of Australia (now Bickford’s Australia). She left Taylors Elliotts with an initial period of the pregnancy and was able to do clerical bookkeeping and secretarial work.

Pauling while in Taylors Elliots met Mark Hanson, a tradesman on the Gold Coast. They married and an inception of construction trades business, with roof plumbing specialization, occurs. Pauline took care of administrative components of the company similar to the Taylor Elliotts and her husband handled with practical labour. The couple gets divorced in 1987 and simultaneously liquidation of the company occurs.

Pauline Hanson immediately starts a catering service with then-business partner Morrie Marsden in 1988. A company Marsden Hanson Pty Ltd was registered and operates with the opening of fish and chip shop in Silkstone, near Ipswich. Then the couple shared the administrative responsibilities of the company. Pauling looks upon additional practical responsibilities with an inclusion of buying supplies and produce goods for the shop and preparing food. The additional duties of Pauline were left out during her political campaign. Hansen with election to Parliament in 1996 sold the company after acquiring the full control of the company.

Hanson’s first election to office was in 1994 with a win of a seat in Ipswich City Council but removed on the premise of an opposition to extra funding after 11 months. Liberal Party of Australia endorsed her as the Liberal candidate for the House of Representatives seat of Oxley for the March 1996 Federal election upon joining the Party. At the beginning, the press ignored her with a belief of the place to be safest labour seat in Queensland. She lured much more attention while leading up to the election. She was a supporter of the abolition of special government assistance for Aborigines and disendorsed her by the Liberal Party for the view. Australian Electoral Commission had closed the nomination for the seat and Hanson was still the nominated candidate of Liberal Party. The Party decision favoured of not allowing her to sit along with the liberals upon election. She took the lead on the first count and won with 54% vote on the sixth count.she entered the parliament as an independent.

Hanson, David Oldfield and David Ettridge founded a new party the Pauline Hanson’s One Nation political party. A firm support base for the party came along with the rural voters with dissatisfaction to other parties. The opinion poll shows positive results of an attraction of 9 percent of Australian voter and it had a negative impact on Liberal Party-National Party Coalition’s base. In 1997 demonstrations against Pauline launching party was organized among 3000-5000 demonstrators. A silent vigil and multi cultural concert against Pauling view were organized by Greater Dandenong City Council along with anti-racism protest.

In the period of late 1990s, Pauline Hanson One nation party called for zero net immigration with a view to an end to multiculturalism and a revival of Australia’s Anglo-Celtic Cultural Tradition. The points also include the abolition of native title and the Aboriginal and Torres Strait Islander Commission (ATSIC).The points dismiss the Aboriginal funding programs against Aboriginal reconciliation forming two nations and a review of the 1967 constitutional referendum. The party points out that the referendum gave the Common Wealth power to legislate for Aborigines. Pauline Hanson One Nation Party is an ideology of welfare of the nation as a whole.

In 1998 One Nation attracted nearly one-quarter of the vote in the state election of 1998 with a win of 11 of 89 seats in the Legislative Assembly of Queensland. Then in 1999, she lost the election and various allegations were reports against her of holding a British citizenship. Pauline on her defence wrote in her autobiography Pauline Hanson: Untamed & Unashamed “of many politicians had dual citizenship and did not stop to hold positions in Parliament.”

Pauline’s falling popularity led her narrowly lose in 2001 election of a senator. Her connection with a series of advisors went without supports were interrelated to her political decline at the period of 2002. The most prominent factor in the decline of a political career at that time was her time at the office is a challenge to political correctness ultimately a threat to Australia’s Identity. The electoral fraud in 2002 imprisoned her for 11 weeks and later charge overturned however created a base for reelection.

In 2004 she announced of being an independent candidate but was able to recover her deposits despite a loss. She continued to fail in 2009 and 2011. In 2007 Pauline’s United Australia Party contested for one of Queensland’s Seats in the Senate in the 2007 federal election but was unsuccessful again.

Hanson again in 2013 announced to stand in the Federal election and did not win a seat as a One Nation Party candidate. Then in 2014, she announced of returning as a one nation leader. Then Pauline was contesting from Lockyer in 2015 but again to her disappointment lost by a narrow margin. Pauline without giving up announces her contest for the Senate of Queensland at the 2016 federal election. Alongside endorsement of a candidate throughout Australia started a campaign “Fed Up” gave a speech at Reclaim Australia rally. In Queensland, Pauline earns 9% of the vote and according to governing double dissolution elections rules becomes a Senator of full 6-years terms. On 17 August 2017 Hanson maintains her controversial status by wearing a burqa with a requirement of an address from Attorney General George Brandis.

Pauline Hanson is a resident of Beaudesert, Queensland on an acreage property. She owns a property in the Hunter Valley region of New South Wales. During her first term in office, her younger children were at an extended amount of security. Pauline was also given extra-security at the time.

In a civil suit in 1999, the Queensland Court of Appeal finds a fraud when registering One Nation as a political party. The court convicts Hanson and David Effridge in 2003 for falsely claiming 500 members of the Pauline Hanson Support Movement were members of the political organization. She, however, gets out of prison after serving 11 weeks..