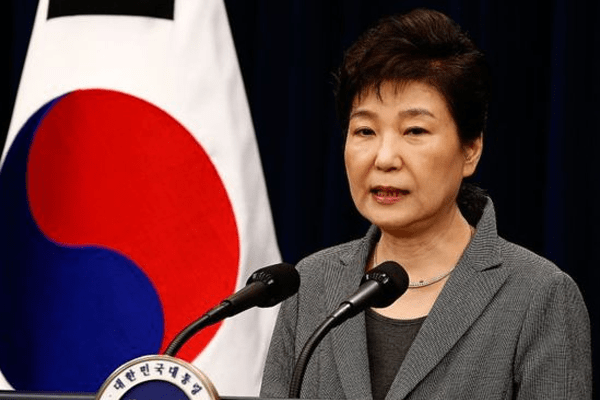 South Korea’s first female president Park Geun-hye news of scandal came up in 2016 that led to her accusation and removal from office.

Born in 1952, Park Geun-hye is the president of South Korea. In addition, she is the leader of the Saenuri Party. She became the first lady of South Korea after her mother’s death. Then, she went on to becoming chairperson of Grand National Party. In 2012, Geun-hye became South Korea’s first female president. Even though she had promised to be the “president for the people”, Park Geun-hye news about scandal in 2016 removed her from office.

Park Geun-hye was born on February 2, 1951 in Daegu, North Gyeongsang Province in South Korea. She was born to Park Chung-hee, the former South Korean President from 1961 to 1979, and former first lady, Yuk Young-soo. Young-soo died in an assassination attempt directed towards her husband. Similarly, Chung-hee died in an assassination in 1979 as well. Geun-hye earned her Bachelor of Science degree in engineering from the Sogang University in 1974, the same year of her mother’s death.

The main reason for assassination of Chung-hee is that he divided South Korea. Park Geun-hye was 11 years old when Chung-hee started his reign. As a president of South Korea, Chung-hee divided the country. In addition, he became a controversial character during Geun-hye’s campaign to presidential election. Therefore, critics claim him to be a dictator, who supported human rights abuse and delayed democracy. On contrary, Chung-hee’s supporters claim that he helped the country to recover after Korean War by transforming economy.

In 1974, Geun-hye earned her BS degree along with the tragedy of her mother’s death. The North Korean assassin Mun Segwag had killed the country’s most popular and beloved first lady, Yuk Young-soo. Therefore, the citizens of the country mourned for her death. The assassin intended to kill her husband though.

Even though Geun-hye was drowned in grief of loss of her mother, she was appointed the nation’s acting first lady. Geun-hye was only 22 years old by that time; however, she fitted perfectly into the political world. As acting first lady, Geun-hye gracefully and efficiently handled the state affairs and several other responsibilities. Five years later, she went through another devastating news. Her father, President Park Chung-hee’s assassination broke her heart. His own intelligence chief, Kim Jae-kyu assassinated him at his own dinner on October 26 1979.

After serving as the first lady, Geun-hye continued to rise in politics. She was appointed as vice chairperson of the Grand National Party in 1998. The same year, she started to serve as the member of National Assembly. She has already served national assembly four times in a row. By the time she was in National Assembly, Park Geun-hye news about her goals was out. She focused on unifying South Korea’s party system and strengthen the nation.

In 2003, Geun-hye was elected chairperson of GNP’s presidential election committee. She then became the chairperson of the Party. In 2007, Park Geun-hye news about her candidacy for president for the Party came up; however, she lost to Lee Myung-bak. GNP changed its name to Saenuri Party in 2012, but Geun-hye continued to stay a remarkable member of the party sering as chairperson of emergency committee.

Park Geun-hye news about her leading the election as president candidate flashed in December 2012. She defeated 59 years old opponent and former human rights lawyer Moon Jae-in South Korea presidential election. Thus, Park Geun-hye became the first female president of South Korea. As a President since February 2013, Geun-hye promised to form a “new era” government and would be “president for the people”. Throughout her tenure, she has worked for unity and prosperity of South Korea and stayed aware of the threats that came from North Korea.

Political Scandal and Removal from Position

While serving as president, critics criticized her to use her power to silence the opposition. As a result, she became one of the country’s unpopular leaders. In 2016, she was involved in corruption scandal. The scandal resulted in her downfall. Park Geun-hye news about extortion, abuse of power and bribery were some popular ones among many.

Consequently, her powers were suspended in December 2016; however, she remained in the office until March 2017. Later, South Korean court removed her from the office which made the first impeachment in the country’s history. Park Geun-hye news about accusation and removal gathered crowd in Seoul to celebrate the event. On the other hand, her supporters protested the decision. After removal, she owned no right to protection from prosecution but instead faced further investigation.

The former South Korean President Park Geun-hye has not married. She is single and has net worth of 1 million dollars. Like her father, she owns supporters as well as critics in her country. Even after undergoing huge scandals, she is popular as the first female president of South Korea who reigned from 2013 until 2017.