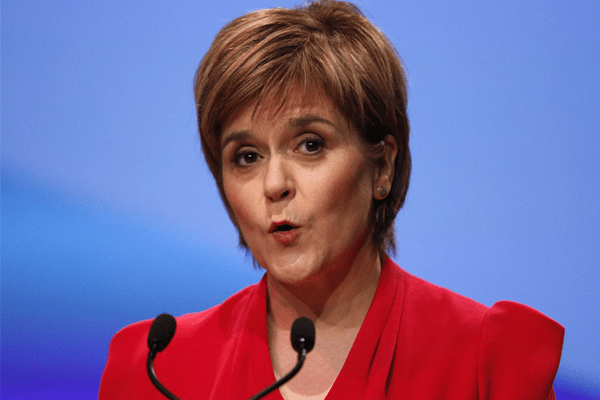 The current First Minister of Scotland and the Sottish National Party (SNP) leader, Nicola Sturgeon salary accelerated as she started serve the Scottish and Parliament under several positions.

Nicola Sturgeon is a law graduated from the University of Glasgow who started her career working as a solicitor. However, she later got elected to the Scottish parliament. As a result, she served as the SNP’s education minister, health and justice. Similarly, she undertook the responsibilities of SPN as the leader. Nicola Sturgeon salary heightened as she served in high positions like Deputy First Minister, Cabinet Secretary for Health and Wellbeing and Cabinet Secretary for Infrastructure, Investment and Cities.

Nicola Sturgeon was born Nicola Ferguson Sturgeon on July 19, 1970 in Irvine, North Ayrshire, Scotland. She was born as the eldest among three daughters of an electrician father, Robin Sturgeon and a dental nurse mother, Joan Kerr Sturgeon. She is Scottish while her ancestry roots from North East England and Ryhope (City of Sunderland).

Sturgeon grew up in Prestwick and Dreghorn where she attended Dreghorn Primary School from 1975 to 1982. She later went to Greenwood Academy from 1982 to 1988. Following the completion of high school, Sturgeon went to the University of Glasgow from where she graduated with Bachelor of Laws (Hons) in 1992. A year later, she obtained Diploma in Legal Practice. During her days at university, she was involved as active member of the Glasgow University Scottish Nationalist Association and the Students’ representative council.

She completed legal traineeship at McClure Naismith in 1995. Soon, she started working for law firm, Bell & Craig and later at the Drumchapel Law Centre from 1997 to 1999.

In 1986, Sturgeon joined SNP and became their Youth Affairs Vice Convener and Publicity Vice Convener. She became the youngest parliamentary candidate in Scotland to stand in the general election in 1992, but failed to win the seat. Sturgeon again failed to win seat in 1997 general election. However, she was appointed as the SNP’s spokesperson for education and energy matters.

A couple of years later, she failed for the third time acquiring a seat in the parliamentary election. But, she became the Member of the Scottish Parliament after being first in SNP’s regional list for the Glasgow Govan. Consequently, she served as the member of the Shadow Minister for Children and Education (1999-2000), Shadow Minister for Health and Community Care (2000-2003) and Shadow Minister for Justice (2003-2004). These positions raised both Nicola Sturgeon salary and prestige.

In 2004, Sturgeon supported Salmond for leadership following election and ran for depute leadership. After the result of election, Salmond became the leader while Sturgeon got elected as Depute Leader. Nicola Sturgeon salary rose as she led the SNP at the Scottish Parliament and became a high profile figure in Scottish politics. In 2007 election, Sturgeon defeated Gordon Jackson due to which SNP became the largest party.

Soon, First Minister Salmond appointed Sturgeon as the Deputy First Minister and Cabinet Secretary for Health and Wellbeing. Taking over the position, Nicola Sturgeon salary rose with responsibilities. She responsibly handled 2009 flu pandemic due to which she became internationally famous. In this role, the Minister for Public Health and Sport, Shona Robison MSP and the Minister for Housing and Communities, Alex Neil MSP supported Sturgeon.

She later resigned from her position of Deputy Leader to become the leader of SNP in 2014.

First Minister of Scotland and Brexit

The same year, she launched the Scotland’s Place in Europe document demonstrating Scotland’s role in Europe post-Brexit. The document seeks for Scotland to remain a member of European Single Market so that Scotland would benefit economically from trade deals across 27 EU nations. It also documented legal and legislation protection of worker’s rights and entitlement.

Recently Sturgeon advocated for second independence referendum. She also called for Prime Minister Theresa May to pause Brexit negotiations. In 2017, she criticized approaches of May and British Government towards Brexit approaches. Sturgeon claimed May will struggle as she is a “difficult person to build a rapport with”. She also committed to no independence referendum during the same time.

Nicola Sturgeon has maintained good international relations through her massive visits to Europe, North America and Asia. The main motive of her visit was to promote Scotland as a place of investment and to trade/do business with. Similarly, Sturgeon showed her commitment to strengthening links between Scotland and African countries stating that Scotland has been key partner funding and developing a number of projects in African countries.

Likewise, Sturgeon signed an agreement with Jerry Brown, Governor of California in her visit to the US. The agreement reads that both the US and Scottish government would commit to work together to tackle climate change. Additionally, she has also visited Ireland and Germany with the purpose of strengthening bonds. In the United Nations, she spoke about gender equality and human rights. She stated clearly that she is determined to use her powers to make things better for women and to achieve peace and security.

Nicola Sturgeon salary did not only rise with the position and power. Her works as the First Minister and other involvement won her a number of prestigious awards. She is the recipient of the Scottish Politician of the Year in 2008, 2012 and 2014. Similarly, she won the Donald Dewar Debater of the Year Award. Further, BBC Radio 4’s Woman’s Hour ranked Sturgeon as 20th most powerful woman in the United Kingdom in 2013. In 2015, she rose in the list of the most powerful and influential woman.

Nicola Sturgeon married current chief executive of SNP, Peter Murrell in 16 July 2010 after being in relationship since 2003. The currently reside in Glasgow. The couple does not have any children, but Sturgeon revealed she underwent a miscarriage in 2011.

The notable First Minister, Nicola Sturgeon is best known for campaigning for women’s rights. She describes herself as a feminist and acts powerfully for gender equality. Nicola Sturgeon salary therefore rose with her reputation.

This is sad. Bruce Forsyth was the consummate entertainer. He'll be missed. https://t.co/Cc76u15lBt