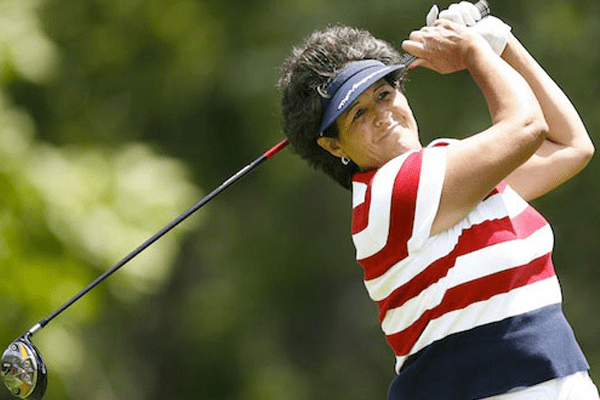 Nancy Lopez is a famous American professional golfer and she has been retired. Nancy Lopez career as a golfer has left an incredible mark for women in sports. With awards and recognitions making a long list, Nancy Lopez has established herself as one of the sought out woman golfer of all times.

Nancy Lopez career success reflects that she has followed her passion very dearly. Even though she has been retired, people have not forgotten her name. She became the member of the LPGA Tour in 1977. She has won as many as 48 LPGA Tour events which actually includes three major championships.

Nancy Lopez’s full name is Nancy Marie Lopez. She was born on January 6, 1957, in Torrance, California. She is in her early sixties and loving it. She lives in The Villages, Florida.

Nancy Lopez has been into sports and has shown remarkable interests in sports right from the beginning. She was the winner of the New Mexico Women’s Amateur at the very young age of 12. She won the U.S. Girls’ Junior twice at the age of 15 and 17. Nancy Lopez went to Goddard High School in Roswell for her high school education.  For the university education, Lopez went to the University of Tulsa for two years.

At the time when she was a collegiate freshman in 1976, she was given a title, All-American and Female Athlete of the Year for her play at the University of Tulsa. That was quite lucky or her as she won the Association of Intercollegiate Athletics for Women (AIAW) national intercollegiate golf championship. She also was a member of the U.S. Curtis Cup and World Amateur teams. She turned professional in 1977.

Nancy Lopez career as a golfer has not only made her popular but also rich. Nancy Lopez net worth has been estimated to be in millions of dollars but it has always been a matter of wonder regarding why she likes to keep her earning a secret.

Lopez turned professional in 1977 so it would be safe for us to say that Nancy Lopez career as a professional golfer started from the year around 1977. Lopez became the winner of nine tournaments which included consecutive five wins during her first full season on the LPGA Tour in 1978. Lopez was featured as on the cover of Sports Illustrated in July. As already mentioned above, Nancy Lopez wins would literally fill a book. She kept on winning titles on and on. In 1985, Lopez secured five wins, five seconds and five thirds. She was also the winner of the money title, the scoring title. She was awarded the Player of the Year Award. She was named Associate Press Female Athlete of the Year and this actually was her second time to get that title.  Nancy Lopez has been able to leave very deep marks in the world of golf. Simply, her career has paid her off. Nancy Lopez net worth boosted up with her achievements but she has never made her earning a public matter.

Then she got married to Major League All-Star baseball player Ray Knight in October 1982 in Pelham, Georgia. He was her perfect one. They have been married for more than three decades and they are still growing strong. The couple has three daughters namely Ashley, Erinn, Torri. All are successful in their fields.

Ray and Nancy have a strong bond of understanding. Their mutual interests in sports might have been one of the major factors that have been keeping their relationship stronger with every passing day.  The couple definitely might be the role model parents for their daughters.

Nancy Lopez is considered as one of the greatest names in the history of women’s golf. She has famous as being the best player from the late 1970s to late 1980s. However, she had not won many majors. Unfortunately, she could never win the U.S. Women’s Open.

She has won 48 LPGA Tour events which include three major championships.  She has been recognized as the only woman to win LPGA Rookie of the Year, Player of the Year, and the Vare Trophy in the same season which was in the year 1978.