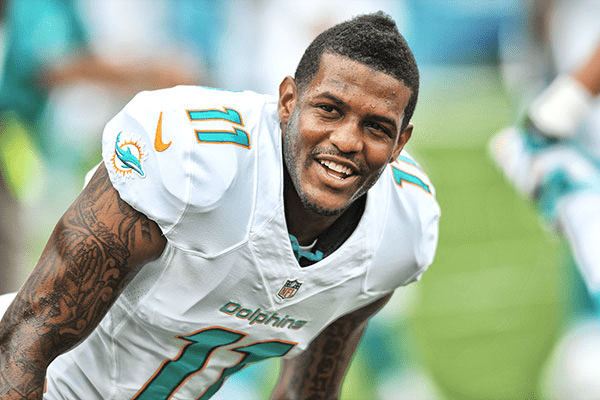 An American football player Mike Wallace NFL career made some terrific sensation for being one of the fastest players in NFL.

Born on 1986, Mike Wallace NFL career began as Pittsburgh Steeler selected him during third round of 2009 NFL Draft. The tall and strong player started playing football from his school days and continued playing for college until he signed NFL draft. Apart from Steelers, he has played for Miami Dolphins, Minnesota Vikings and Baltimore Ravens. He is still the wide receiver for Baltimore Ravens.

Burnell Michael “Mike” Wallace was born on August 1, 1986 to parents Burnell and Sonjia Wallace. The American belonging to black ethnicity, Wallace was born in New Orleans, Louisiana. He has studied in O. Perry Walker High School.

Wallace grew up playing football when he was in school. He was a versatile player who played for both offense and defense. After tons of games during high school, he showed phenomenal performance during his senior season. Consequently, he received All-State honors as a wide receiver. Mike Wallace NFL career dream went on smooth with his outstanding performance from the early days. Mike Wallace also won league and district MVP honors along with All-league, All-Metro, All-West Bank and All-West Bank MVP honors. Moreover, Wallace broke school record for total points and touchdowns.

The standout player in the school continued giving his best performances and received All-State honor for athletics too. Rivals.com rated him as two-star recruit whereas, SuperPrep ranked him 17th in college prospect.

After winning all the prestigious awards, he committed to Oregon State in the beginning of 2004 as he accepted a scholarship from Oregon State. Nevertheless, he did not join Oregon later. Insead, he followed his coach at the University of Mississippi. He played 10 games in freshman year, 2005 and 12 in 2006 during which he had his first career touchdown. In 2007, he played 12 games recording 716 receiving yards. With 7 catches of at least 40 and 3 of 50 yards, Wallace became the top ranked player in Southeastern Conference (SEC). He received the title third-team All-SEC.

Mike Wallace NFL career began as Pittsburgh Steeler signed him in 2009 NFL Draft worth $1.740 million with $555,000 bonus. Wallace made 100 yards receive against Cincinnati Bengals in 2009. He caught a game winning pass and contributed in defeating Green Bay Packers. The Steelers won with the score of 37-36 due to which Wallace became the winner of Joe Greene Great Performance Award.

In 2010, Wallace moved to number 2 receiver spot. He turned to be a standout player during 2010 season with 1257 yards receiving and 10 touchdowns. During Wallace’s first Super Bowl, he had 9 catches for 89 yards and 1 touchdown.

In the year 2011, Mike Wallace NFL career recorded 95 yard receptions with Roethlisberger which was the longest in Steeler’s history. After Wallace got selected to Pro Bowl for AFC, he made 72 receptions for 1193 yards. Wallace became a free agent towards the end of 2012 season.

The same month, Wallace signed a 2-year contract with Baltimore Ravens worth $11.5 million. While in Ravens, he teamed with Joe Flanco and contributed to Ravens’ victory against Steelers. During Mike Wallace NFL career, he made his second highest catch rate of 61.5%. Further, he ranked 11among NFL wide receivers in 2016 for his 403 yards.

Mike Wallace NFL career paid him enough salary which increased his net worth. He owns best luxury cars like Mercedes, GMC and Nissan and luxury apartment in Baltimore worth $1.8 million. Summing up these and the contracts he signed, his net worth is estimated to be $83.5 million with his annual salary of $5.7 million as per the record of 2016.

The 6 feet tall and strong player, Mike Wallace has worked his way high up in his NFL career. Being the overachiever from the early days, Wallace’s personal life and relationship is not revealed. Nevertheless, his fame and recognition comes from being one of the fastest players rather than his individuality and his relationships. The self-made player therefore becomes one of the renowned players in football.