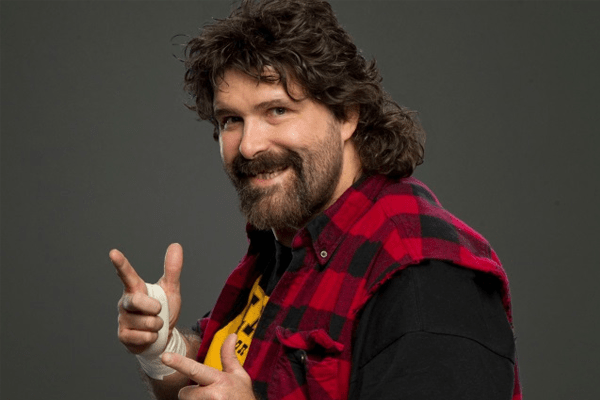 Mike Foley is an American retired wrestler who has also served as writer, color commentator and actor. Similarly, Mike has worked for various wrestling promotions like World Championship Wrestling (WCW), Extreme Championship Wrestling (ECW), Total Nonstop Action Wresting (TNA) and so on. One of the greatest wrestlers in the WWE history, Mick Foley net worth rose as he participated in WrestleManias XV.

Michael Francis Foley was born on June 7 1965 in Bloomington, Indiana in the USA. He is an American native who grew up with an older brother John. His family moved to East Setauket, New York. There Foley attended Ward Melville High School where he wrestled alongside Kevin James. Later, he went to the State University of New York during the time of which he hitchhiked to Madison Square Garden to see Jimmy Snuka wrestle against Don Muraco. He now cites that Snuka’s flying body splash inspired him to wrestle.

Mick Foley net worth started to rise with his training in 1983 at Dominic DeNucci’s wrestling school in Pennsylvania. Foley debut in 1983 and partook in squash matches as jobbers for WWF TV Tapings. There, he wrestled under names Jack Foley and Nick Foley. Once he faced Dynamite Kid after which he was unable to eat for weeks.

After spending years wrestling, Mick Foley net worth increased as he started to receive offers from regional promotions. He joined Continental Wrestling Association as Cactus Jack where he held CWA title for a short time in 1988. Foley continued to win several other titles including light heavyweight and tag team. His popularity grew with his match against Mill Mascaras at Clash of Champions X: Texas Shootout. During this period Foley lost his two front teeth in a car accident. This lost teeth appearance made him recognizable in wrestling industry.

During his early days of career, Foley signed with Universal Wrestling Federation and later to Tri-State Wrestling where he won a Falls Count Anywhere match along with other matches. His performance grabbed attention of WCW promoters as a result of which he got the chance to joine WCW as a full timer.

Mick Foley debut attacking Sting in 1991 but Sting won the match. But at the Clash of Champions match, he helped Sting’s team win the match.

Next, he wrestled with Big Van Vader in 1993 where he won by count-out injuring himself a great deal. Foley faced Vader in Texas Death match was one of the most brutal matches of all time. As a result, WCW refused to book Cactus (Foley) against Vader. In the wrestling between these two in Munich, Vader ripped Foley’s ear but they still continued to wrestle until referee picked the ear and gave it to ring announcer. Later, Foley chose wrestling over undergoing surgery to reattach his ear. He won his only WCW championship which gave a rise to Mick Foley net worth.

Foley joined Smoky Mountain Wrestling (SMW) in 1994. A year later, he went to wrestle in International Wrestling Association of Japan where he got the name “Tsunami Stopper”. Soon he returned to ECW and wrestled against Sandman for ECW title. He knocked Sandman unconscious winning the ECW title which gave a push to Mick Foley net worth.

In 1996 Mick Foley net worth rose as he signed a contract with WWF where he chose Mankind as his name. He debut defeating Bob Holly and quickly moved into feud with The Undertaker. After Foley appeared to win the match against The Undertaker due to Paul Bearer’s refusal to announce The Undertaker winner, Foley faced Shawn Michaels. Michaels won with the interference of The Undertaker and Vader. Mankind-Undertaker feud continued in WWF World Heavyweight.

Foley signed TNA in 2008 for short term where he debut in September 2008. He defeated Sting and won TNA World Heavyweight Championship in April 2009. This was his first TNA championship that also gave Mick Foley net worth a hike. Similarly, he continued to win TNA Legends Championship defeating Kevin Nash on July 2009.

Foley returned to WWE in 2011 and appeared in Raw on 2012, WrestleMania XXVII and WWE SmackDown: Blast. The same year, he hosted WWE: Falls Count Anywhere- The Greatest Street Fights. In addition, he appeared as Special Guest Enforcer in match between Cm Punk and John Cena.

Mick Foley net worth increased as he turned to general manager for the show Saturday Morning Slam; however, the show did not air. In 2015, he appeared at SummerSlam and WrestleMania 32 in 2016. In 2017, Foley attacked Triple H stuffing stinky sock in his mouth. Stephanie McMahon would fire Foley for his action but he last appeared in 2017 WWE Hall of Fame ceremony.

Mick Foley net worth as a writer rose from the mid-1999. He wrote autobiography and book entitled Have a Nice Day: A Tale of Blood and Sweatsocks. The book topped The New York Times’ non-fiction bestseller list for several weeks. Similarly, his book came up in 2001. It was Foley Is Good: And the Real World Is Faker than Wrestling. He also wrote his third part of autobiography entitled The Hardcore Diaries which spent some time in New York Times Bestseller list.

The persevering and daring wrestler has gained prominence through his strong professional skills. His professional wrestling career has not only earned him reputation but also accelerated his net worth. By now, Mick Foley net worth has reached $18 million.


Hey there #FortLauderdale - see you at @FloridaSupercon TODAY from 11-6, TOMORROW 11-6 and SUNDAY 12-4 pic.twitter.com/05Z6ehmXsN