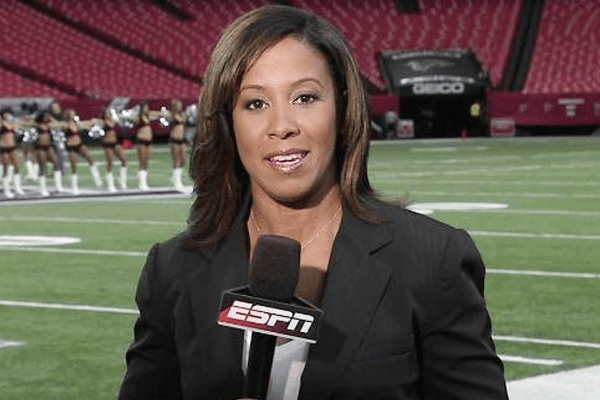 Lisa Salter is an American journalist and former collegiate women’s basketball player. She has been a reporter for ESPN and ESPN on ABC since 2000.Previously she covered the O.J Simpson murder case for ABC and worked as a reporter at WBAL-TV in Baltimore from 1988 to 1995.

Lisa Salter was born in King of Prussia, Pennsylvania, U.S. She was born on March 6, 1966. Lisa Salter current age is 51 as of now.

Lisa Salter graduated from Penn State University in 1988 with a bachelor’s degree in broadcast journalism. She is a graduate of Upper Merion Area High school in King of Prussia where she is a member of the school’s Hall of Fame.

Lisa Salter joined ESPN as a general assignment reporter in March 2000.She currently serves as sideline reporter for Monday Night Football and the lead sideline reporter for ESPN’S coverage of the NBA on ABC. In addition, Salter is one of the featured correspondents on ESPN’s news magazine show, E: 60, which debuted in October 2007.In 2008, she was nominated for a Sports Emmy Award for the story “Ray of Hope”.

At ESPN, Salter’s report has been regularly featured on the award-wining “Outside the Lines” series. She led the network comprehensive coverage of the murder conspiracy trial of Carolina Panthers wide receiver Rae Carruth in December 2000 through January 2001. Additionally Salter was ESPN’s reporter at starting lineup a day before its first match in against Portugal. Salter reported from the 2004 Olympic Games in Athens, Greece and hosted ESPN’s coverage of the 2006 Winter Olympics Games in Torino, Italy.

Salter covered sports-related stories in and around U.S. Central Command in Qatar for outside the Lines, Sports Center and ESPNEWS. She went back into a war zone in 2004 when ESPN took sports center on the road and broadcast live from Camp Arian, a U.S Army base in Kuwait.

On December 1, 2007, Salter was covering the Big 12 Championship Game at the Alamodome in San Antonio, Texas. In one of her sideline reports during the first half she mentioned Missouri quarterback Chase Daniels frustration due to Missouri being stymied by the Oklahoma defense, saying Daniel was ”upset” and “Fuming”. However, a technical blunder caused Salters microphone to be broadcast over the stadium PA system. Prior to joining ESPN, she served as a Los Angeles-based correspondent for ABC News from 1995 to 2000 and provided news coverage for World News Tonight with Peter Jennings and other ABC News broadcasts. At ABC News, she covered the Oklahoma City bombing trial, the Matthew Sheppard murder, the crash of TWA Flight 800, and both the civil and criminal 0.J Simpson trials.

Lisa Salter is not a married woman and she is currently not dating anyone. Her profession demands her to look sharp and prepared all the time and she stands up to it. She not being married yet adopts a child named Samuel. She is fitness and health conscious and regularly hits the gym. She took a challenge and took the chance to raise the child of her own.

Lisa Salter age cannot be detected by her appearance and personality. She indeed proved that she is a potential parent though she has no one to support her in parenting. Tony Dorsett, the former star running back the University of Pittsburg and the Dallas Cowboys is her cousin. She lives with her adopted son in Baltimore.

Cam Newton was riding around downtown Charlotte today on this. pic.twitter.com/sxp0CoxkUu