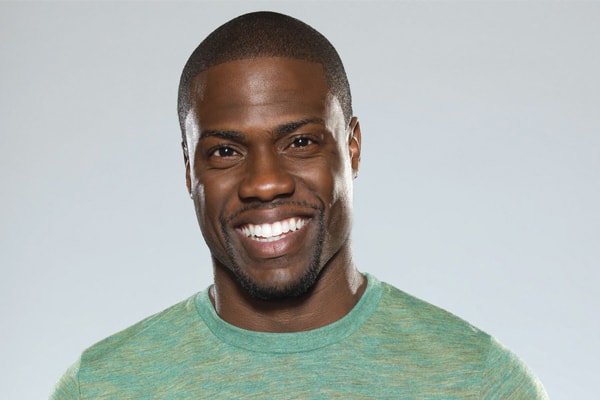 The American actor, comedian, writer, and producer, Kevin Hart is known best for his stand-up comedy and comedy movies. Kevin Hart net worth is known to have been amassed from his remarkable musical and well as acting career. Kevin Hart movies like Think Like a Man, Ride Along, The Secret Life of Pets and more has gained him huge fame and finances.

Kevin Darnell Hart was born on 6th July 1979 in Philadelphia, Pennsylvania, US. He was born to Nancy Hart and Henry Witherspoon. Hart was raised by his mother since his father was a cocaine addict who was in jail most of Hart’s life. He spent most of his childhood days with his brother Robert.

Kevin Hart received his education from the Community College of Philadelphia.

He then went on to live in New York City to find jobs. Eventually, he shifted to Brockton, Massachusetts and worked as a shoe salesman.

Kevin Hart then began working in nightclubs in Philadelphia as a stand-up comedian to earn some extra money.

Kevin Hart used the name Lil Kev in his first gig at The Laff House in Philadelphia. He then went on to take part in many comedy competitions around Massachusetts.

Kevin Hart went on to exploit his insecurities and life experience on stage and took it to a comedic level. His tours then began in 2009 as a stand-up comedian under the act titled I’m a Grown Little Man.

Eventually, he went on to garner huge success from his tours out of which Laugh at My Pain grossed $ 15 million. Kevin Hart went on to world tour titled “What Now? Tour” in San Antonio in 2015 which ended in August 2016 in Columbus.

Also See: Kevin Hart in New Music Video based on Cheating His Wife

Kevin Hart released the second single titled Baller Alert featuring T.I. and Migos. Kevin Hart has also been in two music videos. He appeared as himself in Terror Squad’s Lean Back in 2004 and T-Pain’s Booty Wurk.

Hart was then seen in the 2003 movie Scary Movie 3 and Death of a Dynasty. Kevin Hart was seen in the movies The 40-Year-Old Virgin, Scary Movie 4, Fool’s Gold, Extreme Movie, Drillbit Taylor, Death at a Funeral, and more till 2010.

Kevin Hart movies like The Five-Year Engagement, Think Like a Man, This Is the End, Grudge Match, Think Like a Man Too, Top Five, School Dances have also been well received by the audience.

Kevin Hart was seen in the movies Ride Along 2, Central Intelligence and The Secret Life of Pets have also been highly famous. Recently in 2017, Hart worked on the movies Captain Underpants: The First Epic Movie, and The Upside. Hart will soon be seen in the post-production Jumanji: Welcome to the Jungle as Franklin “Moose” Finbar. He will also be seen in the 2018 movie Night School.

Kevin Hart has also appeared in many TV series. Hart first appeared in the 2002 series Undeclared. Since then he has been seen in 5 episodes of The Big House, Barbershop, 21 episodes of Wild n’ Out, 6 episodes of Kröd Mändoon and The Flaming Sword of Fire, and more.

He has been the co-creator, writer, and executive producer of Real Husbands of Hollywood since 2013. Kevin Hart has also gained fame through his comedy shows and episodes. Hart also has various YouTube videos which is popular among his fans overseas.

Kevin Hart has been in a lot of controversies related to drunk driving. Kevin Hart was arrested in 2013 when he nearly collided with a tanker truck in Southern California after drunk driving.

He was booked for misdemeanor DUI. In the same year, Kevin Hart was sentenced to three years of probation to one count of driving under the influence of alcohol.

Kevin Hart net worth comes from his huge salary from his work in movies like Scary Movie, Think Like a Man, and also from his various tours.

Kevin Hart net worth will see an increase in the coming days through his potential future career in Hollywood.

Kevin Hart wife was Torrei Hart. The couple got married in 2003. Together they went on to have two children named Heaven and Hendrix.

In February 2010, the couple went on to have a divorce. Kevin Hart requested a joint custody of their children and in November 2011 their divorce was finalized.

Kevin Hart wife at present is Eniko Parrish. The couple got married in 2016 near Santa Barbara, California. Together Eniko and Hart have a child, a boy named Kenzo. There have been many controversies regarding the marriage. Hart was accused of having an extramarital affair.

However, Eniko is reported to have forgiven Hart and Hart has also made a public apology for his misdemeanor. Hart’s mother died of cancer in 2007. Hart currently has an improved relationship with his father.

Kevin Hart has been honored with many awards for his exceptional comedy shows and also his acting skills. Hart has received 2 Teen Choice Awards among 9 nominations.

He has also won 1 BET Award out of 3 nominations. He is the recipient of 3 NAACP Image awards out of 5 nominations. He has won a Nickelodeon Kids’ Choice Award Favorite Funny Star. Hart has also been the NAACP Entertainer of the Year.

Hart has also won an MTV Movie Award in 2015. Kevin Hart has won 3 People’s Choice Awards and 3 Kids Choice Awards. Also, he has been the recipient of awards like Billboard Touring Awards and Acalpulco Black Film Festival. Kevin Hart is particularly famous in Instagram with 54.7 million followers. Kevin Hart’s bio can be found on various social media sites like Wikipedia, IMDB, twitter, facebook, Instagram, and more.


You can still check out HART TO HEART! Be sure to subscribe and ring the bell so you know when I go live. https://t.co/E8ZmEabJdI