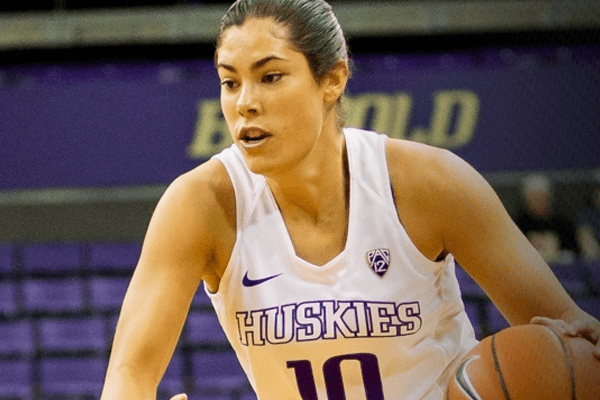 American professional basketball player Kelsey Plum salary rose as she broke NCAA record in a single season and earned a number of awards.

Kelsey Plum was born on August 24 1994 in Poway, California in the United States of America to Katie and Jim Plum. She is an American and belongs to white ethnicity. Plum received sports gene from her parents as her mother was a volleyball player for the University of California. Similarly her father was football player in La Mesa, California where he earned All-American honors. Plum grew up with two older volleyball player sisters: Kaitlyn who played for UC Davis and Lauren who played for University of Oregon. Like her sisters and mother, Kelsey first played volleyball in junior school but she switched to basketball during her high school.

Plum attended La Jolla Country Day School where she scored 2247 averaging 19.9 points per game. With the excellent start, Plum got into 2013 WBCA High School Coaches’ All-America Team and participated in 2013 season. In the season, she scored 14 points.

Kelsey Plum salary rose as she got into USA Basketball U19 team. While she was in the team, she competed on behalf of the USA at Tenth FIBA U19 World Championship in Lithuania. The team won all nine games in the season where Plum scored 5.6 points per game. Thus, Plum contributed in winning gold medal to her home country in the World Championship.

Even though Plum was injured and endured surgery, she managed to play 2015 Pan American Games in Toronto. The team USA lost the first game against Brazil but managed to play gold-medal game against host country Canada.  The two countries had a very competitive game; however, Canada outscored the USA with 81-73 winning first gold medal in Pan Am basketball games.

After winning the match in Lithuania, Plum flew to Seattle instead of going back home. She headed to her school for summer term and got acquainted with the University and her teammates. Therefore, her coach Mike Neighbors named her the team captain seeing her passion to start back immediately. She was only the freshman when Mike made her captain; however, she set six freshman records. Consequently, she earned Freshman of the Year award also because she was the high scorer.

During Plum’s sophomore year, she scored 45 points breaking school record even though the team lost the game. As a result, she landed as one of the Wade Watch among 25 potential players. Similarly, Kelsey Plum salary rose as she contributed to Huskies to earn a bid to NCAA Tournament; however, the team lost to Miami.

During the junior year, Plum was named the Ann Meyers Drysdale National Player of the Week as well as Pac-12 Player of the Weeks due to her smashing record. She scored 25.9 per game resulting in turning the first player in Pac-12 and fourth in the US. Kelsey Plum salary rose as she led Huskies on NCAA Tournament; nevertheless, they lose to Syracuse Orange with the score of 80-59.

When Plum was in the senior year, she became all-time leading scorer in Pac-12 history. The year, her team won over Arizona and Boise State. Plum reached 3000 points in her career in 2016 becoming the first Pac-12 player, and the 12th NCAA Division I women’s player to reach the point. She set new record for the NCAA Division I women’s basketball through the win over Utah breaking previous 3393 points record. The outstanding player led Huskies to regional semifinals of the NCAA Tournament.

Even though the team knocked out of the tournament, Kelsey Plum salary and fame raised winning Associated Press All-American First Teamer honor.  Plum ended her senior year with 1109 points and became one of the five finalists for Wooden Award. She also became the first Husky to receive the honor AP Player of the Year for Women’s College Basketball.  The other awards she has won are Nancy Lieberman award, Dawn Staley award, Naismith Trophy, Wade Trophy, Honda Sport Award, etc. all in 2017 i.e. her senior year.

Kelsey Plum salary went on accelerating as she established herself as a prominent player in women’s basketball. In the first pick of 2017, San Antonio Stars drafted Plum marking the history that Plum and Flutz came from the same school the same year in the first draft. Plum’s debut game was on May 25 against Dallas. In the game, she scored 4 points in just over 12 minutes.

Relationship, Salary and Net Worth

The young and aspiring player has no record of relationship. She is single with no children. Instead, Plum is passionate about basketball and her career right now.

The enthusiastic player works wonder in the court and it is obvious that she earns in millions with her well established career. However, the actual figure of Kelsey Plum salary and net worth is still under calculation. There is no doubt that turning into a recognizable player in and out of the country earns her roughly $50000 in one season with WNBA.