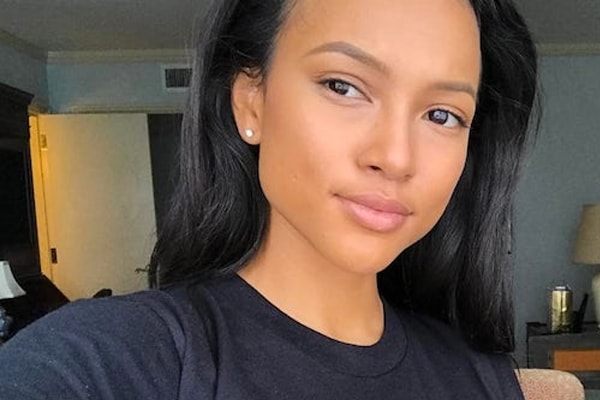 American actress and model, Karrueche Tran movies and series The Bay and Claws earned her mainstream exposure and heightened her net worth.

Born in 1988, Karrueche Tran earned fame as the girlfriend of R&B singer Chris Brown before she made her career in modeling and acting. She starred as Vivian Johnson in the web series The Bay from 2013 and 2016. Currently, she appears in the TNT’s series Claws as Virginia.

Karrueche Tran was born on May 17, 1988 to a Vietnamese mother and African-American father. She grew up in Los Angeles, California. Tran went to Fairfax High School and switched to Birmingham High School from where she graduated in 2006.

Tran began her career from fashion industry as a personal shopper. She started working at Nordstrom in 2009 until 2012. Afterwards, she worked as a freelance celebrity in Hollywood and gained public attention after she began dating R&B artist, Chris Brown in 2010.

Soon, Karrueche Tran began modeling. She started off posing for photoshoots for different local brands and as the face of Lady Crooks. Similarly, she posed for Castles and Crooks for their 2013 summer collection.

Tran then began working in her own clothing like, The Kill. Gaining prominence through modeling, she landed the role of Vivian Johnson in the series The Bay. The series is an Emmy Award-winning web series. She starred as Vivian from 2013 to 2016.

Before Karrueche Tran movies came up, French brand Le Coq Sportif featured her in Spring/Summer lookbook in 2015. Furthermore, she appeared on the covers of Rolling Out, Flaunt Magazine, Ouch Magazine, The Hundreds, Cliché and Bleu. These appearances won her a contract with Wilhelmina Models LA in 2015.

The first of Karrueche Tran movies is a feature film 3-Headed Shark Attack while PrXde was the second one. Soon, she gained recognition for portraying Vanessa Ivy in web series by StyleHaul, Vanity. The make-up brand, Maybelline, sponsored the fashion web series.

Later, she landed in supporting roles in A Weekend with the Family and The Nice Guys. She portrayed a married woman, Chloe, in Only for One Night which is the lead role. All of these Karrueche Tran movies released in 2016.

After she departed from The Bay, Karrueche Tran starred in TNT series Claws (2017). The series details out the storyline of 5 different manicurists working in a salon in South Florida.

Karrueche Tran movies and television performances have earned her multiple awards and nominations. She is the winner of Daytime Emmy Award for Outstanding Digital Drama Series in 2016. Tran won the award as a producer in The Bay. The following year, she earned the same award nomination for the same series but did not win.

Besides, she has received Indie Series Award nomination for Best Supporting Actress in 2016 and 2017 for The Bay.

The actress/model Karrueche Tran gained prominence after she started dating R&B singer Chris Brown starting in 2010. The couple broke up for a short duration after Brown reconciled with his ex-girlfriend, singer/songwriter, Rihanna. However, they re-continued their relationship.

In 2015, the reports revealed that Brown had a daughter, Royalty, with Nia Guzman. A couple of years later, Tran got a temporary 100-yard restraining order against Brown.

The skilled actress/model, Karrueche Tran movies and television appearances have garnered her net worth of $500 thousand. Best known as Vivian from The Bay, the actress has not only garnered success and monetary worth, but also significance in the acting industry.