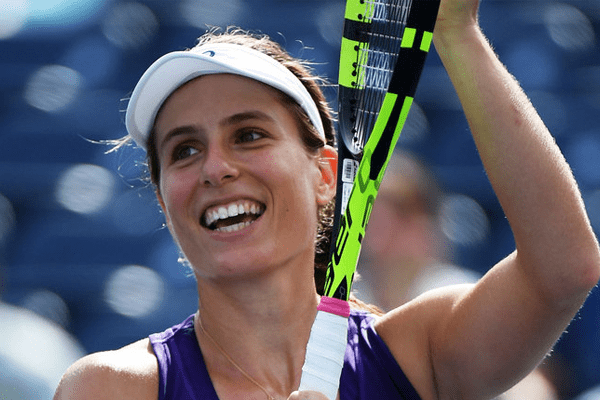 Johanna Konta tennis titles victory is three for WTA, 11 single and 4 four doubles for ITF circuit. She is currently British #1 tennis player in 2017. Konta is semifinalist of 2016 Australian Open, Quarterfinalist of Rio 2016 Summer Olympics and became first British female to reach Grand Slam semifinals in 32 years. She is the first home player to be seeded in Wimbledon in 30years in 2016. Konta is also the first home player to reach semifinals of Wimbledon in 2017.

Johanna Konta was born on 17 May 1991 in Sydney, Australia. She is a daughter to a Hungarian couple. Her father Gabor is a hotel manager and mother Gabriella is a dentist. Konta’s parents met in Australia as immigrants. Tamas Kertesz is one of the grandfathers of Konta. He played for Ferencvarosi TC and won two international caps in the 1950s and later coached Ghana National team and became an inspiration for sports. Konta has a half-sister from her father’s previous marriage.

Johanna Konta spent most of the childhood in Collaroy, Northern Beaches of Sydney. She was a learner of tennis at the starting age of 8 through an after-school programme. At the age of 14, Konta began attending the Sanchez Casal Academy in Barcelona. She spent 15 months there in an attempt for advancement in skills. Konta’s parents moved to England in between the training in Spain. The family settled in Eastbourne, East Sussex in the period.

In May of 2012 with a citizenship of Britain, her sporting allegiance changes from Australia to Britain. Konta uses passports of Britain, Australia and Hungary.

Johanna Konta tennis title victory started in 2008 with her first International Tennis Federation (ITF) singles title. The tournament was organized in Mostar, Bosnia and Herzegovina shortly before her 17th birthday in May 2008 with the prize amount of $10,000.

In 2009, Konta entered in a tournament at Sutton, the UK through a wild card.She lost the tournament final and receives the prize money of $25,000. She receives prize amount of $25,000 after winning the W.O.W. Challenger in Waterloo, Ontario, Canada over Heidi EI Tabakh the same period. The second half of that year was difficult for Konta ending her tournament in the first match in all eight of nine tournaments. This did not stop her from 360 ranking player from 668.

Konta in 2010 regains her form for some time at the start. She along with average performances reaching quarterfinals of the $50,000 tournament at Indian Harbour Beach, Florida. The breakthrough of that year for Konta was the title on the green clay courts of Raleigh, North Carolina, another $50,000 tournament. On that tournament, she defeated Lindsay Lee-Waters a day before her 19th birthday with some difficulty.

The same year she appeared later in quarterfinals of $50,000 tournament, two semifinal appearances in $25,000 tournaments and her ITF single title of the year at a $10,000 tournament in Westende, Belgium. Konta played her first WTA Tour event with a qualification for Copenhagen and exit with a loss.

Johanna Konta tennis match lost to Sania Mirza in April 2011 dropped her to qualifying draw. She at Fes and Strasbourg dropped off with a loss. Konta in 2011 won her fifth ITF singles at the Aegon GB Pro-Series event in Woking in July. Konta after recovery from the injury in a couple of months learnt to win again in Madrid with a prize amount $10,000. The win was held back with a loss to Robson in the first-round at Barnstaple in October of that year. Konta fell down to 305 to 248 in the world ranking.

In 2012, Johanna Konta tennis match wins at Rancho Mirage gives her $25,000 title in February with some improvements. The pace leads Konta to WTA Tour event in Copenhagen for second successive year. Konta in her first match in the tournament wins against seventh seed Ksenia Pervak. In the next stage, she lost to Petra Martic but rise 96 places up to 211 in the world ranking.

On the month of May, Konta received a main draw wild card to Wimbledon along with a citizenship of Britain. In her debut appearance at Wimbledon, she lost to Christina McHale in deciding the set. In the final appearance that year at Lexington in July she builds up a pace and qualified to the US Open, the following month. She lost in the second round of the US Open to Olga Govortsova and propelled up to 153 in the world ranking.

Konta at the Australian Open in 2013 lost in the second qualifying round to Zhou Yimiao without consistent form developed in US Open. In the year Konta entered a Fed Cup but could make a significant breakthrough in doubles. During the period she could not justify her wild card entry to Wimbledon also. Konta however, strengthens her British ranking to no.2.

In 2014, Konta again wasted her Grand Slam entry with a US Open Draw with a lost to Shahar Peer. In 2015, Johanna Konta tennis world ranking reached to top 50. Although, she lost in the qualifying in WTA Tour and Australian Open. But, she managed to qualify for the French Open with a longest tie-breaker defeat to Denisa Allertova in the tournament. Konta manages to win a wildcard entry to WTA grass court event. In the event, she managed to reach quarterfinals and at the year end after many tussles, she manages to appear 47 in the world ranking.

In 2016, Konta manages to reach Australian Open semi-finals with a lost in the end to Angelique Kerber in a Straight set. The year she became the first British female player to reach the Grand Slam singles semifinals in 32 years. Konta became the first home player to be seeded in the ladies singles at the Wimbledon for more than 30years and lost in second round to Eugenie Bouchard. She changes her surface to hard courts and won the first WTA title in Stanford Classic beating former world champion Venus Williams. Johanna Konta tennis career rises to peak with the win but could be consistent at the end.

In 2017, at Sidney, Konta won the WTA title without even losing a set. Australian Open, however, sees her off with a loss in last eight to eventual winner Serena Williams. Johanna Konta tennis tour of WTA in Miami see her champion in the final beating Venus Williams in the semifinals and Caroline Wozniacki in the final. The Miami Open is the biggest title of Konta. She is in a triumphant form in 2017 and is continuing to make surprising event appearances.

She specializes on the offensive baseline with experiences and skills for all court-games. Konta’s skill to serve is what makes her dangerous opponent. In WTA match statistics she has 62% service points win and fourth in Ace counts and 74.8% serve game wins as well as 52.7% second serve points win. She is with a flat and aggressive backhand and semi-western grip to the forehand. Konta has double deep penetration and volleys to some point weakest part of her game. She is equipped to defend and athletic runs, movement and footwork. She prefers grass to hardcourt but she succeeds most of the time on hard courts.

Konta has Asics as her clothing sponsors and Babolat as her racquet sponsor. The racquet is Babolat Pure Aero range of racquets. She chose to be a brand ambassador of Remeo Gelato.

She was trained at the Sanchez-Casal Academy in Barcelona in 2005. In 2011 January then trained at Weybridge Tennis Academy in England under the guidance of coaching Justin Sherring. Johanna Konta tennis training in 2012 occurs at the National Tennis Academy in Roehampton with LTA supplied coaches Louis Cayer and Julien Picot from mid-2012 to the beginning of 2014. She in 2014 splits with Picot for personal reasons and then, trains under Spanish coach Esteban Carril with LTA closing the National Tennis Centre. Konta in the end of 2014 start mental coaching and stops in 2016 with the demise of Juan Coto.

In 2015 the LTA funding was reduced and she trains with coach Esteban Carril and Jose-Manuel Garcia. Konta then in 2016 splits up with the two and retrains with Belgian Wim Fissette as the main coach. Johanna Konta tennis practise session occurs with her hitting partner Andrew Fitzpatrick in the absence of Fissette.