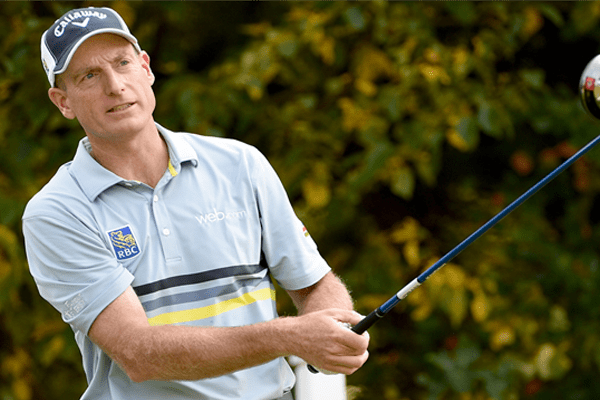 The professional golfer, Jim Furyk plays on the PGA Tour. He has been FedEx Cup champion and PGA Player of the Year. Also, he has been the winner of  major U.S. Open championship in 2003. Jim Furyk net worth hiked even more as he won the second place under Official World Golf Ranking.

Jim Furyk was born as James Michael Furyk on May 12, 1970 in West Chester, Pennysylvania in the United States of America. He is an American while his ancestries are Czech, Polish, Ukrainian and Hungarian.

Born to mother Linda Furyk and father Mike Furyk, James spent his early days learning the game from his head pro (in Uniontown, Fayette County) golfer father in Pittsburgh. He attended Manheim Township High School in Lancaster County where he did not only play basketball but also won state championship as a golfer. Later, he continued to play golf while he attended University of Arizona where he won All-American twice leading the Wildcats to NCAA title in 1992.

Jim Furyk net worth rose as he turned professional in 1992. During his professional career, he won many titles and awards. To name some of them, he won Nike Mississippi Gulf Coast Classic in 1993 Nike Tour. Soon after turning professional, he joined PGA Tour in 1994. He won PGA Tour multiple times between 1998 and 2003.

Due to his excellence in his professional career, his name was listed under top 10 in the Official World Golf Ranking. But Jim Furyk net worth elevated with his biggest win for recording the lowest 72-hole score in U.S. Open in June, 2003. With this record, he won his first major U.S. Open Championship.

Jim underwent surgery to repair his damaged cartilage in his wrist as he fell down on his left wrist while trying to catch the pass. Therefore, he missed Tour Championship, the Sun City Million Dollar Challenge, and the World Match Play in Australia in 2004. However, he had a smashing comeback in 2005 winning a PGA Tour event that year and also one in 2006. Similarly, he won Vardon Trophy for the first time making his second time career-high record. The year 2010 was a blessing for him as he won his career-best three tournaments. They are The Transitions Championship, the Verizon Heritage and the Tour Championship that earned him 2010 FedEx Cup. Moreover, he also won the prestigious titles PGA Player of the Year and PGA Tour Player of the Year in 2010.

In between 2010 and 2015, Jim underwent narrow losses to Webb Simpson, Keegan Bradley and Jason Dufner. Nevertheless, the golfer came back in 2015 winning the RBC heritage. The same year, Furyk withdrew from BMW Championship due to wrist injury. He also could not play for the 2015 Presidents Cup due to the injury. Moreover, he missed early 2016 games while he was undergoing surgery. But in the later 2016, he ended up as a runner-up at the U.S. Open.

In 2016 only, he shot 58 in a PGA Tour Event becoming the first PGA Tour pro under 60. The following year, i.e. in 2017 Jim Furyk net worth heightened as he earned the title United States Ryder Cup captain for 2018.

Wife, Children and Net Worth

Jim Furyk married Tabitha Skartved, his long-time girlfriend, in 2000. The couple has two children. Staying in the list of top ten for more than 380 weeks since 1999, Jim Furyk net worth is 50 million USD. He owns a home in the Kapalua Resort and in Ponte Vedra Beach.

The winner of a major championship and many other golf events, Jim Furyk net worth and recognition rose with his successful position and swing.