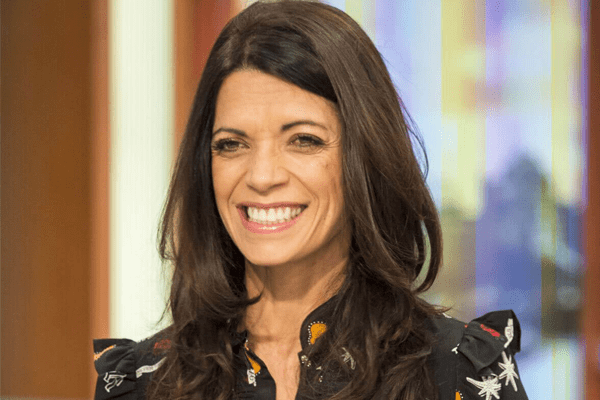 Jenny Powell is an English TV presenter famous for BBC 2, BBC 1, ITV and Channel 4. She is active in the industry since 1986 and is continuing till date. TV Show Bigheads (2017) for ITV as a commentator is Powell’s latest TV Show.

Some of Jenny’s noteworthy works include Wheel of Fortune, Soap Fever, Celebrity Wrestling, and more.

Jenifer Powell was born on 8th April 1968 in Ilford, Essex, England, UK. From her parent’s side, she possesses Cape Coloured descent from South Africa. She is of British nationality.

Jenny Powell’s began her career in 1986 working for the Now That’s What I Call Music! series as a TV ad voiceover. Soon, she went on to work for BBC2 on its music program No Limits.

Before, Jenny Powell TV show UP2U for BBC1 was also highly appreciated. Then she went on to appear on Gimme 5 for ITV. In 1989, Powell became a presenter for Top of the Pops.

Jenny then hosted ITV’s Wheel of Fortune in 1995. Two years later, she went on to work on Channel 4’s satirical spoof documentary show, Brass Eye. She also worked for UKTV Style on shows like Soap Fever, Live Talk, Getaway, and Our House.

Jenny Powell received an appreciation from the public along with her fellow co-workers. She also competed in the ITV reality TV show, Celebrity Wrestling in 2005 and named as The Avenger.

Jenny also has a comedic appearance on the Granda Television’s Stand Up Jenny. But she did not receive positive feedback for the work. She made her mark in BBC 1 by presenting To Buy or Not to Buy. In 2008, Powell appeared in ITV’s Bingo Night Live.

A year later, Jenny on Five’appeared on a quiz show, Wordplay. Jenny, as a contestant also appeared on Channel 4’s Celebrity Come Dine with Me and BBC 1’s Celebrity Masterchef in 2010.

She also made brief appearances on the show La Vida Loca’s two episodes for ITV. On Jan 27, she also appeared in And They’re Off for sports relief.

Jenny Powell’s net worth is expected to be $ 1.9 million. She is an active member of Jenny Powell limited located in the United Kingdom having worth £6.25K, according to Suite.endole.

However, according to Dailymail, when Jenny was seven months pregnant with her 2nd baby, Powell found Toby having an affair with another woman while she was pregnant. Toby was dating Suzanne Galloway, a recruitment consultant. So, Powell filed for divorce and finally separated in 2009.

As of Feb 2018,  Jenny Powell is in a relationship with Martin. The couple met at the Euston train station in December 2016 while Powell was traveling back to Manchester. At present, she is living with her fiance and daughters in Cheshire.

Jenny Powell has a height of 5 Feet 9 Inch (1.75 m). She has dark brown eyes and hair. She is active on the social pages like Instagram and Twitter.

Stay in touch with SuperbHub to get updated news and information on celebrities.