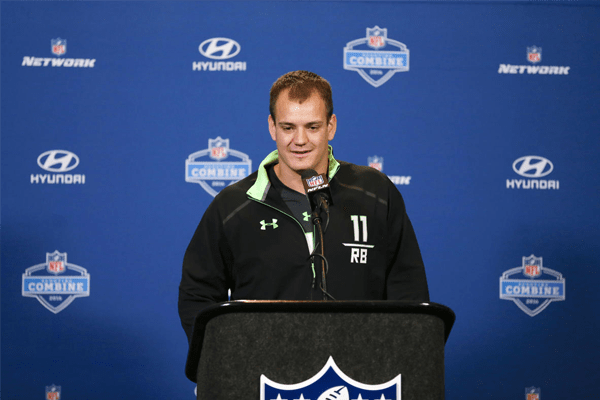 Glenn Gronkowski career is established as football fullback and he plays for New England Patriots of the National Football League (NFL). He has played college football when he was in Kansas State University and his high school. For Kansas State, he has contributed in recording highest average in college history.

Glenn Thomas was born as Glenn Thomas Gronkowski on March 25, 1993 in Buffalo, New York. His birth date makes him 24 years old by 2017. Glenn is the youngest of 5 brothers among which Rob Gronkowski is notable player currently serving for New England Patriots. His another brother Dan Gronkowski is a former NFL player and Chris Gronkowski formerly played as football fullback in National Football League for Dallas Cowboys. Similarly, his eldest brother, Gordie is a pro baseball player in the Los Angeles Angels’ organization. Having brother involved in football, Glenn Gronkowski career was also influenced by the environment he as he grew up. He is a native of Williamsville, New York and he is American nationality.

Glenn Gronkowski career in football was started early from his high school days. He joined Williansville North High School where he caught 53 passes for 762 yards  and 11 touchdowns during his senior year. Therefore, he was honored as Section VI Class AA North Co-Offensive Player of the Year.

After graduating from high school, Glenn attended Kansas State University in 2012 for his further studies where he chose Marketing as his major. As a college freshman, Glenn Gronkowski career took a hike as he decided to redshirt in 2013 appearing in all 13 games. The year served successfully for Glenn as he recorded 5 catches for 194 yards. Glenn then earned the title All-Big 12 for recording the 14th 1000 yard season in school history.

In Glenn Gronkowski career, he went through a series of transactions. Glenn had first tried for 2016 NFL draft for which resulted in rejection. So, he signed the contract from Buffalo Bills in 2016 and Buffalo Bills released him on 12 September 2016. On October 2, 2016, Glenn signed to the New England Patriots’ Practice Squad. New England released Glenn in 12 October but then again he signed into New England Practice squad in 17 October 2016 until November 7. New England signed Glenn to the practice squad in 16 November 2016 and released him in 30 November 2016. As a member of the practice Squad, he earned his first Super Bowl ring with the Patriots in Super Bowl LI. The Patriots re-signed Glenn for 2017 seasons on February 14, 2017. In 2016, Glenn Gronkowski career took a new turn as he made his NFL debut in week 1 making 53-man roster as a free agent.

He was the primary fullback for Kansas State during all three seasons where he played in 39 games with 20 starts and averaged 24.6 yards on 15 career receptions. The record marks the highest average in school history among players with 15 or more catches. Hence, he helped Kansas State earn a 23-16 record in his three-year career.

Glenn Gronkowski career established as primary fullback and has received a number of honors. Being a young player who has received multiple honors right away, Glenn is supposed to have a great career ahead.