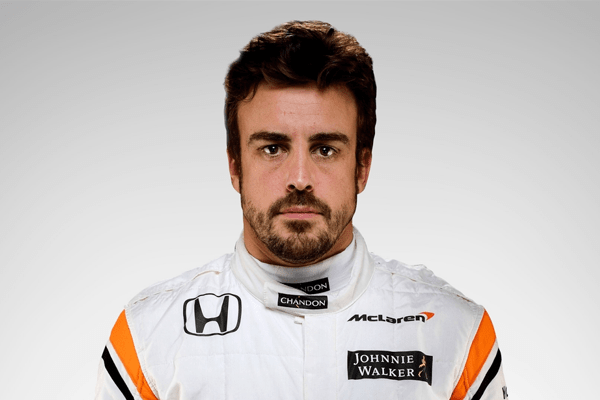 Fernando Alonso Boost his racing ability from Karting to Formula One driver. He is the youngest racer to be F1 Champion in the beginning.

Fernando is Karting Champion in 1996. His debut F1 race was from Minardi in 2001 and moved to the Renault team as a test driver in 2002. Alonso was a winner of Formula One World Drivers’ Championship at the age of 24yrs and 58days. At age of 25, he became the youngest double champion of F1. Fernando Alonso boosts his ability as the only Spanish F1 racer to win six Grand Prix titles to the present year of 2017.

On 1981, 29 July was born as Fernando Alonso Diaz a son to a mechanic father in an explosive factory and department store worker mother. His father Jose Luis was an amateur Kart racer and he wanted his children to have the passion for Kart racing. He built a Kart for his elder daughter of age 8. She did not show any interest. Alonso at the age of 3 was with keen interest to the kart.

Fernando attended his first school in the Holy Guardian Angel Primary School in Oviedo. He changed to Institute Leopoldo Alas Clarin of San Lazaro at 14. Alonso dropped out of the Institute in 2000 and pursued the career of motor racing.

The Early career of Alonso started with kart racing competitions upon the support of his father by giving extra effort on the work of a mechanic. The family of Alonso did not have sufficient economic resource to develop a career in motor sport. His victories attracted sponsorship and the required funds filling out the economic pit.

Having started Kart racing at an early age of 3 gives Fernando Alonso boost the ability to adapt challenges with racing. He acquired four Spanish Championships titles back-to-back in the junior category, between 1993 and 1996. He won inter-A-titles of Spain and Italy in 1997. Alonso again won inter-A-title in Spain in 1998 and finished second in the European Championship.

Adrian Campos a former Minardi F1 driver was the one to give Alonso a race car test in the month of October 1998. The test occurred for three whole days in Albacete circuit. Alonso gave the lap time equal to Marc Gene a former driver to Campos. Fernando was signed up by Campos to race along with him Spanish Euro Open MoviStar by Nissan series in 1999.

In 2000, the second time race in Albacete, Fernando Alonso boost the career and won for the first time. His rival in the race was Manuel Giao beaten with only one point. Fernando sets the time of fastest lap in the race. The enthusiasm of the race carried him for the Minardi Formula One team as a test driver. Alonso recorded fastest lap time than other drivers at the test.

In the second season, Alonso gets the boost up to Formula 3000, which was a final step to ascending to Formula One. Team Astromega took Alonso and he became the youngest driver in the series that year by 11 months. Alonso scored points at seventh race of the year and came second in final two rounds. At the end of the season, Alonso became fourth.

Alonso started his formula one race in Australian Grand Prix from Minardi Team. In debut, he was the third-youngest driver to start the F1 race. Paul Stoddart was a new owner of the Minardi and the season started with a new car PS01. The car was not very much suitable for the race with less reliability and speed. Fernando Alonso boost level of ability giving a praise-worthy performance in comparison to his teammate in the season.

The performance monitored by other faster teams pointed their attention to Alonso. But, he was taken as a test driver of Renault in 2002. In 2003 Briatore of Renault put Alonso in the second seat alongside Jarno Trulli instead of Jenson Button. The decision led to the criticism of Briatore by the British media and defended by technical director Mike Gascoyne. Alonso completed 51 laps of the Silverstone Circuit in May of 2002 with Jaguar Team.

Fernando Alonso boost intensity of his ability to be the youngest driver to achieve a Formula One pole position at the Malaysian Grand Prix. The Brazilian Grand Prix ends with Alonso crash to the result of missing the double yellow flags and safety car boards. The Hungarian Grand Prix gives Alonso a win and sixth position in the season and four podiums.

2004 leads Alonso close to a victory against Michael Schumacher and ended the season on the fourth position in the championship. In 2005 he won two races back to back from the pole position in Malaysia and Bahrain. The third win, however, was later discovered due to crippled engine and the team treats the engine differently. The third win, however, was vital as it was a win over Michael Schumacher. The European Grand Prix brought victory to Alonso on the last lap due to a crash of Raikkonen.

Fernando Alonso boost meter of ability after finishing third in the Brazilian Grand Prix seal the title at the age of 24 and ended the dominance of five years by Michael Schumacher. He dedicated his victory to his family and his team.

In 2007, he left Renault and signed in to McLaren and sealed his first win for McLaren in April 2007 and first of the team since 2005. In 2008 due to some disputes in McLaren Alonso returned to Renault. The same year in 2008 he won last two races in Japanese Grand Prix. The Renault R29 was out of focus for Alonso in the performance in 2009. He was even penalized in Japan.

In 2010 Alonso signed in to Ferrari and he remained there to the end to 2014. The European Grand Prix again gave Ferrari a race win an took the first pole at the next round in 2 years with a Fernando Alonso boost. The year of 2013 Alonso wins the home race the Spanish Grand Prix. But at the end of the season, Fernando Alonso boost low and struggled to score podium due to a use of new tire by Pirelli. In 2014, a new rule of picking unique number throughout the seasons gets an amendment. Alonso picking number 14 ended the season with only one podium. The season was the end term for Alonso at Ferrari.

Alonso returned to Mclaren in 2015 and remains a team member to the present.  In Barcelona pre-season, he involves in an accident with a concussion in the test results. The unconfirmed reports point out to a condition of retrograde amnesia in which he has no memory after 1995 believing himself to be a Kart racer. He gave his best of rank fifth in the Hungarian Grand Prix and failed to further score any point.

At Australian Grand Prix in 2016, Alonso suffered a crash with partially collapsed lung and fractures in rib. A replacement of Alonso occurs with Stoffel Vandoorne for the Bahrain Grand Prix. In the season he finished 7th out running 45 place grid penalty with another Fernando Alonso boost up.

Alonso in 2017 made a partnership with Stoffel Vandoorne but announces to miss Monaco Grand Prix with in mind to compete Indianapolis 500. In qualifying for the Spanish Grand Prix, he made it to Q3 with an enthusiasm of starting from seventh on the start grid. In Indianapolis, Alonso led 27th laps and became a strong contender for the victory. The remaining 21 laps was not possible due to broken Honda engine and classified 24 and got praise for his strong debut with a standing ovation.

In the European Grand Prix 2003, Alonso was in allegation of giving a brake test to David Coulthard by Mclaren managing director Martin Whitmarsh and David Coulthard. The FIA steward gave the incident a decision of not requiring further judicial action on the basis of telemetry data and video data.

The brake test accusation on 2006 he was guilty. Stewards penalized on Alonso against Robert Doornbos in the second free practice session. The controversies of slowing down hovered against different racers too even Michael Schumacher. He also allegedly involves in a “Crashgate” according to media in 2008.

In 2010, he again came into controversy along with teammate Massa on allegation involving the use of team orders. Alonso is on an allegation of gesticulating furiously at Vitaly Petrov on the slowing down lap in front of TV cameras. Then, accusing him of depriving world crown which he denies later.

Lap of Love, Marriage and Net Worth

Becoming an ambassador of the University of Oxford to promote a field of study of Social Science on Motorsport of Business in 2005 Alonso lived in Oxford, England.

In 2006 Alonso moved to his own residence in Lake Geneva, Switzerland and remained there till 2010. The same year in 2010 he moved to Lugano. In 2010-11 he moved again to Oviedo to be closer to his friends and family. The move cost him 50 million pounds in tax as an estimation.

Alonso gets in a relationship of marriage to EI Sueno do Morfeo’s Lead singer on November 2006. They got a divorce in 2011. In 2012 he dated Russian model Dasha Kapustina and they split after 2 years. At the moment Alonso is dating Spanish Journalist Lara Alvarez. Alonso has a net worth of $80 million and his annual salary at the moment is $40 million dollars.

• 20% off for the next 48h on the LA CAREY sunglasses! Just introduce the code #SUMMER20 . https://t.co/vHteYEPNbM @Kimoa pic.twitter.com/5n3PgUVHP7