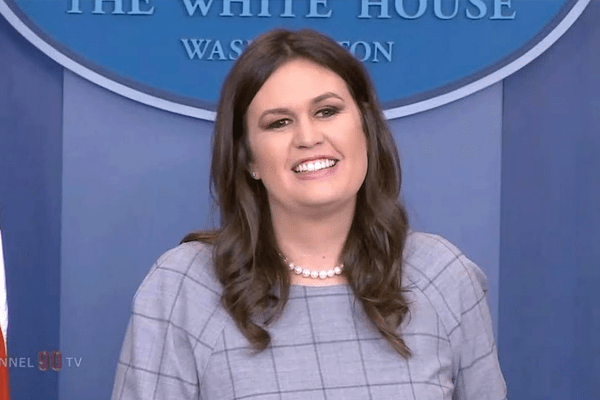 Born on August 13, 1982, in Hope, Arkansas, USA, Sanders is the only daughter and the youngest child of Mike Huckabee, the former governor of Arkansas and Janet Huckabee. Sanders has two brothers, John Mark and David Huckabee, an Arkansas, contract broker. Sarah sanders husband is Bryan Chatfield Sanders.

Sanders graduated in 2004 from Ouachita Baptist University in Arkadelphia with a Bachelor of Arts Degree where she was active in Republican Organizations and other student groups and elected as Student body president.

Sanders’s political interest began as a child from the age seven when her father ran for governor of Arkansas in 1992.

Influenced and inspired by her family political background she was focused from her early age. Sarah Sanders father states her childhood, saying “I say that when most kids are seven or eight years old out jumping rope, she was sitting at the kitchen table listening to political commentators analyze poll results.”

Sanders Political Career rise initially began in 2002 as a field coordinator for her father’s re-election campaign for governor of Arkansas.

Sanders also worked under George W. Bush as a regional liaison for congressional affairs at the U.S. Department of Education and as a field coordinator for the re-election campaign of President Bush in Ohio 2004.

She was the national political director for her father’s presidential campaign in 2008 and was the senior political advisor to Tim Pawlenty in his 2012 presidential run.

Sanders was actively involved in campaigns of U.S. senators from Arkansas, where she managed John Boozman’s 2010 campaign and administered Tom Cotton’s 2014 election.

She worked as executive director of a political action committee, Huck PAC after her father’s 2008 campaign.

Sanders also managed an organization which aimed at ending global poverty and preventable diseases, ONE Campaign.

In 2016, Sanders signed on to serve in the capacity of senior advisor for Presidential nominee Donald Trump and handled his communications for coalitions.

Sanders held her first White House press briefing on May 5, 2017, covering for Press secretary Sean Spicer who was then serving at the Naval Reserve and soon after the resignation of Sean Spicer on July 21, 2017, Sanders took the role of White House Press Secretary.

Sanders reported in response to questions on Trump’s mental fitness for office in January 2018 as, “What I think mentally unstable is people that don’t see the positive impact that this president is having on the country.”

Sarah Sanders husband is Bryan Chatfield Sanders. He was the Republican political consultant during her father’s 2008 presidential campaign.

They met each other on the campaign trail where Bryan was a media consultant, and Sanders was working as the field director, and soon bonded in the relationship.

They married on May 25, 2010, at Nazareth Lutheran Church in Cruz Bay on the island of St. John, in the U.S. Virgin Islands.

Salary and net worth

Sarah Huckabee Sanders net worth is estimated to be $9 million.

Sarah Sanders joined Twitter in January 2017 and is actively participating in the social platform and has 2.51 million followers.

Ask El Paso, Texas (now one of America's safest cities) across the border from Juarez, Mexico (one of the world's most dangerous) if a wall works https://t.co/UJCLNeuz4Y