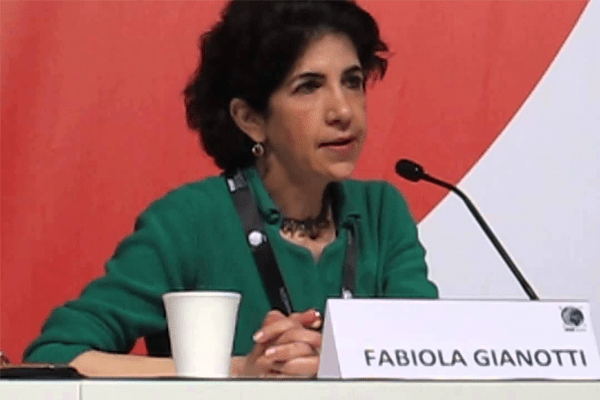 The distinguished and talented Italian particle physicist Fabiola Gianotti is known best for her noteworthy career CERN. Fabiola Gianotti CERN career as the first female director general has made her be recognized as one of the world’s most powerful women. Fabiola Gianotti’s Higgs boson discovery has been a huge achievement in the field of science. Fabiola Gianotti twitter account has details of her personal and professional life.

Fabiola Gianotti was born on October 29, 1960, in Rome, Italy. Fabiola is of Italian nationality and white ethnicity. Fabiola Gianotti received her education from the University of Milan. Fabiola went on to receive her Ph.D. in experimental particle physics 1989.

Fabiola Gianotti has worked in various positions since 1996. She worked for the Physics Department of CERN as a research physicist. Eventually, she went on to work at the European Organization for Nuclear Research. Apart from Fabiola Gianotti CERN career, she has also been the Honorary Professor at the University of Edinburgh. Fabiola is also known to be a member of the Italian Academy of Sciences (Accademia Nazionale dei Lincei). Fabiola has served the US National Academy of Sciences as its foreign associate member. Also, Fabiola has worked for the French Academy of Science as a foreign associate.

Fabiola Gianotti has served in numerous CERN experiments like WA70, UA2 experiment, ALEPH, ATLAS. She has worked in the detector R&D and construction, as well as software development and data analysis. Fabiola is also known to be a significant member of Scientific Council of the CNRS in France. She has also worked for Physics Advisory Committee of the Fermilab Laboratory in the USA. Fabiola was the Council of the European Physical Society. She was also part of the Scientific Council of the DESY Laboratory in Germany, and the Scientific Advisory Committee of NIKHEF based in Netherlands.  Fabiola has also worked for UN Secretary-General, Mr. Ban Ki-moon as Scientific Advisory Board.

Fabiola Gianotti was the elected project leader and spokesperson of the ATLAS project at CERN in 2009. During the time of her leadership, the ATLAS collaborated with 3,000 physicists from 180 institutions in 38 countries. It was one of the two experiments involved in the observation of the Higgs boson. The discovery of the particle was announced in July 2012 by Fabiola Gianotti. Higgs boson which was a theoretical part of the standard model went on be physical. Fabiola Gianotti’s leadership and untiring efforts were said to be the major factors in the discovery of Higgs boson.

Fabiola Gianotti has been the author of more than 500 publications till date in her career in science. Fabiola Gianotti, in her career till date has given more than 30 invited plenary talks at the major international conferences in the field of particle physics. Fabiola’s publications are considered to be of huge significance in the field of science.

Fabiola Gianotti has publicly shown her views towards religion and science. She shared in a 2010 interview that she has no illogicality between science and faith. She shared that they belong to “two different spheres”. Fabiola also believes that “Science and religion are separate disciplines, though not antithetical. You can be a physicist and have faith or not.” which she shared in an interview.

Fabiola Gianotti has been honored many times for her remarkable work in the field of science. The  Italian President Giorgio Napolitano awarded Fabiola with Cavaliere di Gran Croce dell’ordine al merito della Repubblica.  She received the Enrico Fermi Prize of the Italian Physical Society in 2013, The Niels Bohr Institute Medal of Honour in 2013, and Fundamental Physics Prize: Special Breakthrough Prize in 2012. Also, Fabiola has won the Milan Municipality’s, Gold Medal. She has received honorary doctorate degrees from many universities like the Oslo University and McGill University based in Montreal. Also, she has honorary doctorate degree from University of Uppsala and University of Edinburgh.

Fabiola Gianotti has also been named one of the Top 100 most inspirational women by The Guardian newspaper in 2011. The Time magazine’s Personality of the Year list has also ranked her as number 5 in 2012. The Forbes Magazine has included Fabiola in their Top 100 most influential women list in 2013. She has also been honored as the Leading Global Thinkers of 2013 by Foreign Policy magazine in 2013. Fabiola Gianotti twitter account has details of her day to day life and her views on various political and social issues around the world. The very talented and renowned Fabiola Gianotti bio can be found on various social media sites like Wikipedia, Twitter, Facebook, and more.