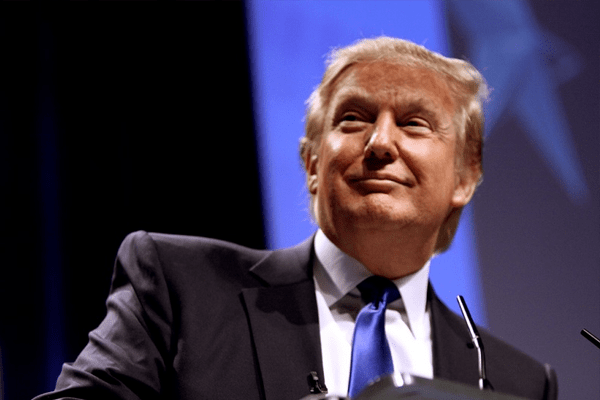 A billionaire businessman of real estate company in America, a Television personality Donald Trump is the 45th U.S. president, in office since January 20, 2017. U.S. President Donald Trump net worth is $3.1 billion.

Born on June 14, 1946 in Queens, New York City, Donald Trump graduated from Wharton School of the University of Pennsylvania in Economics. He followed the footsteps of his grandmother Elizabeth and father Fred and is the third-generation businessman.

He served as a chairman of The Trump Organization since 1971 until the start of his presidency January 2017. He delegated the company management to his sons Donald Jr. and Eric.

His business was specially focused on building and renovating the office towers, golf courses, hotels and casinos. There are also multiple side businesses and branded products in his name.

As published in September 2017 Forbes magazine, Donald Trump is the 544th richest man in the world and 201st in U.S.A.  Donald Trump net worth is estimated to be $3.1billion as of 2017. Out of the total, he has $1.6 billion in New York real estate, $570 million is in golf clubs and resorts; $500 million is in non-New York real estate; $290 million is in cash and personal assets; and $200 million is in brand businesses.
In 1982, he was listed in the Forbes 400 list of wealthy individuals with an estimation of $200 million including the undefined share of his parents in the real estate. He became a billionaire in late 1980s. He first made to the Forbes World’s Billionaires in 1989. But he was seen nowhere in Forbes 400 from 1990-1995. His business was in heavy loss and it is reportedly said that he borrowed from his siblings trust in 1993.

Trump lost contracts with several companies in 2015 due to his controversial remarks on illegal migrants. This reduced Donald Trump net worth in Forbes by $125million.  As per his net worth published in Forbes he is one of the richest politicians in American history. However, these estimates fluctuate from year to year depending upon the researchers and analysts.

His net worth was questioned as he refused to release his tax returns to the concerned auditing authority Internal Revenue Service.

Donald Trump is the fourth of five children of a real estate developer and builder, Frederick Trump and a New York socialite and philanthropist Mary Anne MacLeod Trump. His mother was an immigrant from Tong, Scotland. His parents married in 1936 and settled in Queens. His father died in 1999 and his mother the following year.

Marla Maples gave birth to Trump’s daughter in October 1993. She was named Tiffany after a high end retailer Tiffany &Company. Trump and maples got married two months after on 20th December 1993. Trump filed a divorce case against Marla Maples in 1997 which was finalized on June 1999. Maples got the custody of Tiffany and also $2million.

Trump married his third wife, a Slovenian model Melania Knauss on January 22, 2005. Melania got the U.S. citizenship in 2006. She gave birth to their son Barron on March 20, 2006. Upon the Trump’s inauguration as America’s 45th president, Melania was declared the First Lady of the United States.

Trump passed the authority of company management to his sons Donald Trump Jr. and Eric as he became the president. His daughter Ivanka resigned from the Trump organization to serve as the unpaid assistant of the President. Her husband Jared Kushner also serves as the senior advisor of the president.

Donald Trump, the current and 45th U.S. president is the father of five children and grandfather of 9 grandchildren.

At the age of 13, he was enrolled in the New York Military Academy after his parents found out about his frequent visits to Manhattan without their permission.

He did well at school both socially and academically.  He was a star athlete and a student leader by the time he graduated in 1964.

After graduation from the academy, Trump started his higher education at Fordham University. After two years, he transferred to Wharton School of Finance at University of Pennsylvania.

He graduated with a degree of Bachelor of Science in Economics in 1968. While studying at Wharton, Trump worked at the family business in summer.

The family of Trump in his father’s side was Lutheran in Germany and his mother’s family was Presbyterian in Scotland. During the campaign trail, Trump said that his book The Art Of Deal is the second best book, fist is The Bible.

He believes that nothing can beat The Bible. Although Trump is a theist, he never asks for forgiveness to God. He once said that, “If I think I do something wrong, I just try and make it right. I don’t bring God into that picture.”

Trump is associated with a number of Christian Spiritual leaders. Florida pastor Paula White has been called his “closest spiritual confidant.”

When Ivanka converted her religion to Judaism before her marriage, Trump stated that he is honored to have a Jewish daughter.

Trump as a TV personality

In 2003, Trump became Executive producer and host of a NBC reality show entitled The Apprentice in which a group of competitors battled for a high level management post in one of the Trump’s commercial enterprises.

He was honored with a star on the Hollywood Walk of Fame in 2007 as recognition for his contribution to TV through The Apprentice.

Trump also co-produced the show The Celebrity Apprentice with a British TV producer Mark Burnett. He was hired as a host for the same show.

In this show, the celebrities would compete to win money for their charities. Trump and Burnett have co-produced the international versions of The Apprentice Franchise.

Trump Vs. Clinton: The 2016 Presidential Campaign

At the start of his political career, Trump was looking for the nomination for the reform party for the presidential race in 200. But he withdrew.

He again made it public that he was running for president in 2012. He declared his participation in the 2016 election at Trump Tower in Manhattan on June16 2015.

However it was not until 2016 that he was actually nominated for the presidential race. In 2016, he became the official republican president nominee and won the majority electoral votes in a mind-blowing victory on November 8, 2016.

When he accepted the presidential nomination on July 21, 2016, he gave an hour and fifteen minutes speech at the Republican National Convention in Cleveland.

In the speech, he discussed about the issues that he would tackle as a president such as violence in America, immigration, economy, trade terrorism and the appointment of Supreme Court Justices. His speech was one of the longest speeches in the recent history.

Interference of Russia in Election

The different American Intelligence Agencies- CBI, FBI and NSA represented by the Director of National Intelligence confronted the intervention of Russia in 2016 Presidential Campaign in favor of Trump.

On June 8, the former Director of FBI James Comey confirmed the intervention of Russia in 2016 election adding, “they did it with purpose and sophistication.”

Trump claimed that the investigation of Russian interference is the single greatest witch hunt in the American history.

Just two days before the second presidential campaign, a recording of Trump and Billy Bush trying to kiss a woman was leaked. It was back in 2005 when they were trying to film an episode of Access Hollywood.

“I just start kissing them,” Trump said, “I don’t even wait. And when you are a star, they let you do it, you can do anything , grab them by the pussy.”

These statements were recorded in the tape recordings which were termed as “vulgar” and “sexist” by the media. This made him apologize for the first time in presidential race. 15 other women came forward claiming about Trump goping and trying to kiss them.

Trump stated that it was a conspiracy of Bill Clinton, the former President of United states and husband of his Democratic Rival Hillary Clinton.

Higher favor ability of Obama than Trump in Albama

A poll was conducted from Monday to Wednesday, 13th  to 15th  November,2017 at Albama. The results were published on Thursday which showed the favorability of Obama at 52 percent and Trump’s at 49 percent.

.And to think that just last week he was lecturing anyone who would listen about sexual harassment and respect for women. Lesley Stahl tape?