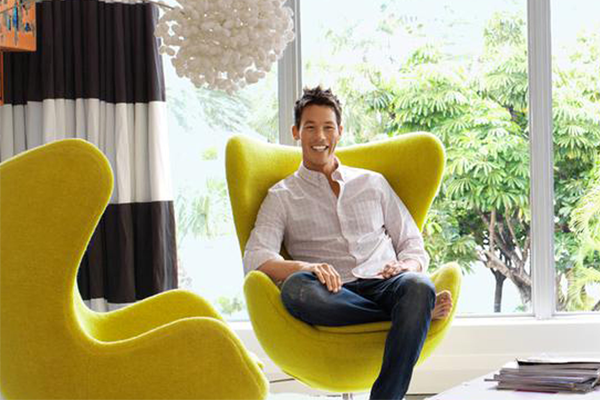 David Bromstad is a prominent American TV personality who is known best for his work in HGTV. David Bromstad HGTV career has taken him from hosting his shows like Color Splash with David Bromstad, Color Splash Miami, My Lottery Dream Home, Design Star, and more. David is also a spokesperson brand enthusiast and owns a line of furniture. The details of David Bromstad home, age, net worth and more can be found on several social media sites that are continuously observed by his fans all around the world. David Bromstad twitter account has details of his day to day life.

David Reed Bromstad was born on August 17, 1973, in Cokato, Minnesota. He was born to Diane Marlys Bromstad (Krueger) and Richard Harold David Bromstad. David’s mother Diane is of Swedish and German Descent His father is of Norwegian descent. He spent most of his childhood days with his three siblings named Dean Richard Bromstad, Dynelle Renee Bromstad, and Dyonne Rachael Bromstad. David was the youngest of his siblings. David is of American nationality and white ethnicity.

David went on to attend Wayzata High School. He later attended the Ringling College of Art and Design in Sarasota, Florida. David was very much interested in art and designing thus he went on to pursue his career as a designer by starting out as a Disney Illustrator.

David Bromstad founded his own company called Bromstad Studio. The company designed various fantasy bedrooms for children. He then moved to Miami Beach. David went on to participate in HGTV’s reality show, Design Star. Soon, he went on winning against nine other competitors and eventually won the show. As a reward, he won a car and a chance to be the host of his own new show on HGTV. That is how David Bromstad HGTV career came to a rise. He began hosting Color Splash with David Bromstad in HGTV. The show turned out to be a hit so HGTV demanded another season. Thus, Color Splash Miami was developed with 26 of its episodes.

David Bromstad is also noted for his work in HGTV Design Star as a guest on the second season. He also contributes for HGTV’s weekly blog. David has also mentored on HGTV’s Beach Flip and has hosted in HGTV’s My Lottery Dream Home.

Furthermore, also works as a spokesperson for Mythic Paint as well as for Miele home appliances as a brand enthusiast. Bromstad is also the owner of a line of furniture and accessories which are available through Grandin Road. David has been doing exceptionally well in his career as a designer.

David Bromstad is famous for his remarkable works in the field of Television hosting. He has also been triumphant at his designing career. He is respected and adored for his dedication towards his work.

David Bromstad HGTV appearance has gained wide attention from his audience who love and praise him. David Bromstad twitter account has details of his triumphant career and his day to day events. The bio of the eminent and respected, David Bromstad can be found on various social media sites like Wikipedia, Twitter, Facebook, and more.