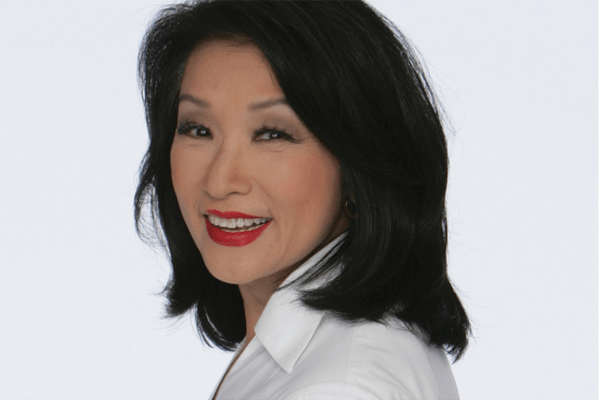 American journalist, Connie Chung net worth has been amassed from her work for news networks like NBC, CBS, ABC, CNN, and MSNBC. Connie Chung has been seen in shows like 20/20, Good Morning America, Connie Chung Tonight, Weekends with Maury and Connie, among others.

Connie was born as Constance Yu-Hwa Chung on August 20, 1946 in Washington, D.C., United States to William Ling Chung who was an intelligence officer in the Chinese Nationalist Government . She spent most of her childhood with her four siblings one of who is Josephine Chen. She is of American nationality.

Connie went on to attend Montgomery Blair High School based in Silver Spring, Maryland. She then joined University of Maryland, College Park from where she graduated with a degree in journalism in 1969.

Connie Chung began her career as a department news secretary in WTTG-TV based in Washington. She then worked as an editor and news reporter. Soon, Connie went on to work for CBS News as a television news correspondent. She has been seen in CBS Evening News with Walter Cronkite from 1972 and 1977. Connie then began working for NBC’s Today Show in 1983. For NBC, Connie worked for Nightly News, News Digest, News at Sunrise, American Almanac, and more.

Furthermore, Connie Chung has made special appearances in ‘The Baby Business’, ‘Scared Sexless’, ‘David Letterman’s Old-Fashioned Christmas’, and more. In 1988, Connie appeared as a correspondent and anchor for Summer Showcase, Campaign Countdown. In the same year, Connie was seen as an anchor in NBC’s Guns. In 1992, Chung was seen as a co-anchor in America on the Line. Connie Chung appeared in 1997’s miniseries, Knife to the Heart as host and narrator.

Connie has made brief appearances on ‘The Rosie O’Donnell Show’, ‘The Phil Donahue Show’, ‘The View’, ‘The Tonight Show with Jay Leno’, ‘The O’Reilly Factor’, and more. Connie has also been seen in movies like Brother’s Keeper, Boogie Man, and more.

Just remembered that this happened. I miss 2012. #Linsanity @JLin7 pic.twitter.com/z4oO4wTSn3