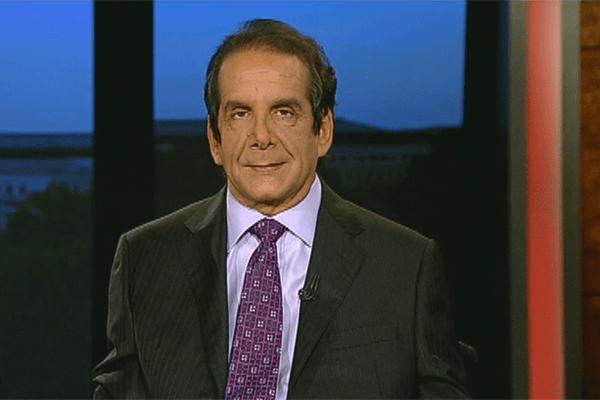 Charles Krauthammer is an American Syndicated columnist, author, political commentator, and nonpracticing physician whose weekly column is syndicated to more than 400 publications worldwide.

Charles Krauthammer was born in New York City, New York, U.S. He was born on March 13; 1950.His current age is 66 years as of now. His father was from Ukraine and his mother from Belgium.

Charles Krauthammer moved to Montreal at the age of 5.Through the school year, they resided in Montreal but spent the summers in Long Beach, New York. Both parents were Orthodox Jews and he and his brother were educated at a Hebrew school. He attended McGill University in Montreal, graduating in 1970 with First Class honors in both economics and political science. After graduating McGill; he studied as a Commonwealth scholar in politics at Balliol College, Oxford, before returning to the United States to attend medical school at Harvard.

In 1978, Krauthammer moved to Washington D.C. to direct planning in psychiatric research under the Carter administration. He began contributing articles about politics to The New Republic and, in 1980, he served as a speech writer to Vice president Walter Mondale. He contributed to the creation of the Diagnostic and Statistical Manual of Mental Disorders, Currently referred to as the DSM-5.In January 1981; Krauthammer joined The New Republic as both a writer and editor. In 1983, he began writing essays for Time magazine, one of which brought him national acclaim for his development of the “Reagan Doctrine”.

In1984, he was board certified in psychiatry by the American Board of Psychiatry and Neurology. His New Republic essays won the “National Magazine Award for Essays and Criticism”. The weekly column he began writing for The Washington Post in 1985 won him the Pulitzer Prize for commentary in 1987.In 1990, he became a panelist for the weekly PBS political roundtable Inside Washington, remaining with the show until it ceased production in December 2013. For the last decade, he has been a political analyst and commentator for Fox News.

In 2006, the Financial Times named Krauthammer the most influential commentator in America. In 2013, he published Things That Matter: Three Decades of Passions, Pastimes, and Politics, an immediate bestseller that remained on the New York Times bestseller for 38 weeks, 10 weeks in a row at number one.

Krauthammer was injured in a diving accident during his first year of medical school. He sustained injuries that left him paralyzed and required him to be hospitalized for 14 months. He has been a wheelchair use since the accident. He remained with his Harvard Medical School class during his hospitalization, graduating in 1975. From 1975 through 1978 Krauthammer was a resident in Psychiatry at Massachusetts General Hospital serving as chief resident his final year.

Charles Krauthammer has been honored many times with awards for his hard work. In 1987, he received Pulitzer Prize for Commentary and in 2004; he was honored with Irving Kristol Award for his impressive work. There is no doubt that he will be honored a number of times in upcoming future also with various awards with his constant hard work and with the excellent work with which he serves the people all around the world in various fields.

Trump and the “madman theory”: The dangers – and uses – of an erratic commander-in-chief. Not since Nixon… https://t.co/p1Evlxo5p1