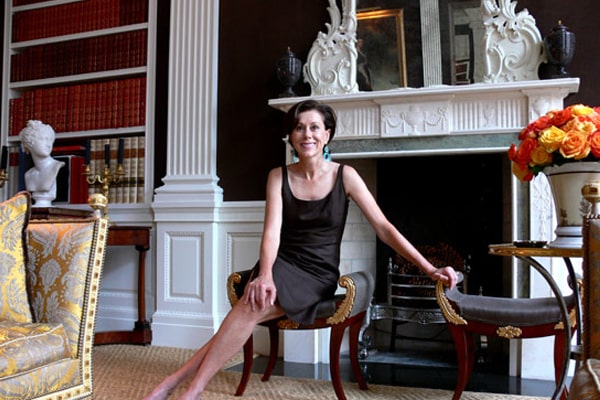 Only a few people in the world can have proficiency in several fields. Among them, Carolyne Roehm is also the one. The talented Carolyne is an American author, entrepreneur, florist, jewelry designer, socialite, and even a painter.

Furthermore, she is also the owner of massive wealth. Let’s drill on more information about Carolyne Roehm.

Despite being successful in her career, Carolyne is less affluent when it comes to her marital life. She was first married to Axel Roehm. Carolyne Roehm and Axel Roehm’s marriage date is hidden. However, it has been disclosed that their marriage only lasted about a year. 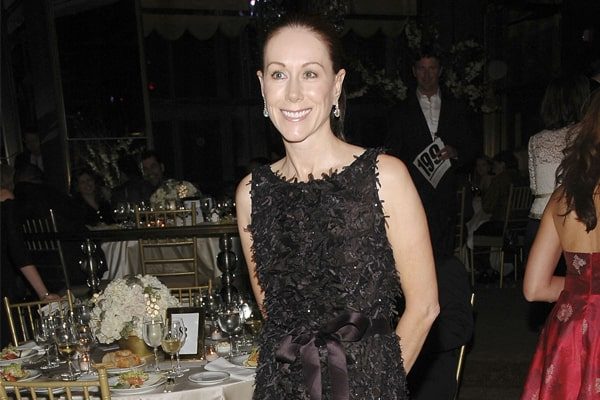 Furthermore, in 1985  she married one of the wealthiest people in the world,  Henry Kravis. Carolyne Roehm’s ex-husband Henry Kravis is an American businessman who is the founder of Kohlberg Kravis Roberts & Co.

Everything was going well, but sadly the ex-pair decided to go separate ways and got divorced in 1993. And they didn’t share any children from their eight years of marriage. 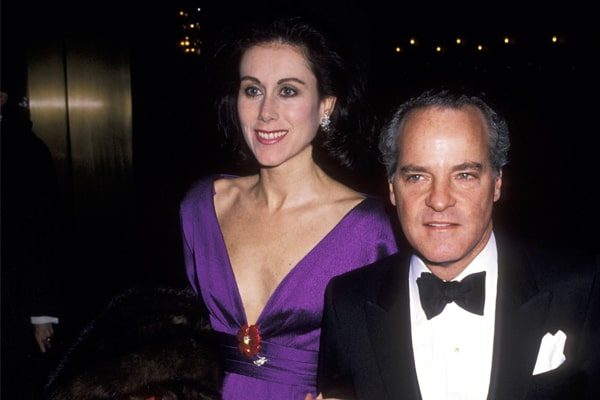 Carolyne Roehm Is A Multitalented Women

Carolyne was born as Carolyne Jane Smith on the 7th of May 1951, in the beautiful city of Kirksville, Missouri, United States. Talking about Carolyne Roehm’s family, she was born to a father who was a high school principal and mother, who was a schoolteacher. 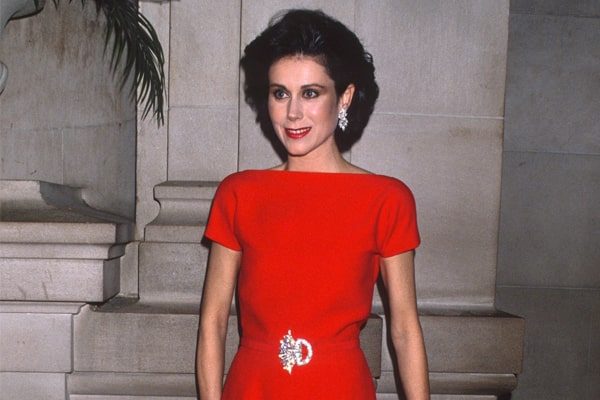 Carolyne Roehm was born on the 7th of May 1951. Image Credit: Getty Images.

She attended St. Louis- based Washington University and graduated in 1973. Later, Carolyne moved to New York City to make her dream come true.

Upon reaching New York City, she began working at an Apparel company, Kellwood. Working in Kellwood made her feel to do something in the fashion world and became a fashion designer and started working for Oscar de la Renta as an assistant designer.

Furthermore, the beautiful Carolyne is also a former President of the Council of Fashion Designers of America. 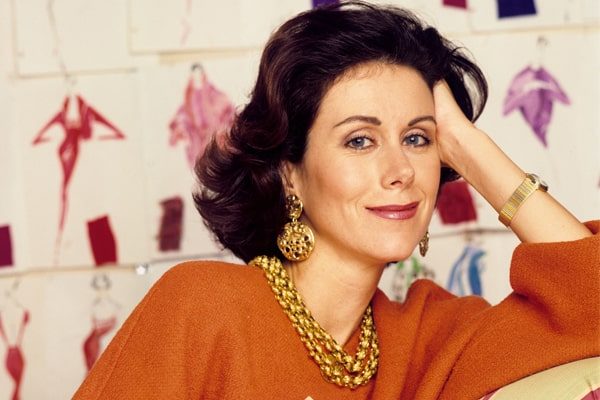 Carolyne Roehm was the President of the Council of Fashion Designers of America. Picture Credit: Getty Images.

Later, in 1985, Roehm became a professional fashion designer and founded Carolyne Roehm Inc with her ex-husband Henry Kravis who invested around $20 million. Carolyne Roehm Inc mainly focused on society ball gowns and cocktail dresses. Later, for some reason, she closed the fashion line in 1991.

Carolyne Roehm is best known for being an author. A Passion for Flowers was Carolyne’s first book, which was published in 1997 and Carolyne Roehm – Design and Style: A Constant Thread is the last book which she published in 2015. She hasn’t published books since 2015. 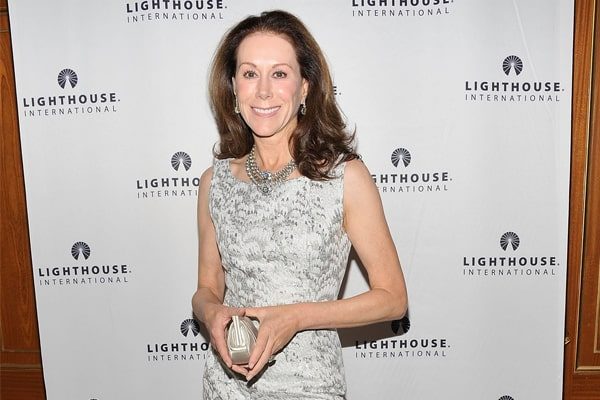 She has published 12 books to date altogether. Some of Carolyne Roehm’s books are:

As of now, the gorgeous author is focused on designing jewelry, bags, prints, notecard, and many others.

Carolyne Roehm’s Net Worth And Sources Of Income

Carolyne Roehm’s net worth is in millions by looking at her sources of income. She has been able to pile up her massive wealth from the sales of books and several other fashional items. As for her ex-husband, Henry Kravis’s net worth is $6.6 billion. 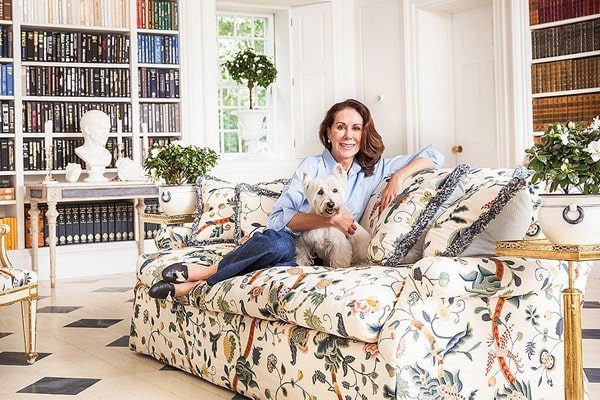 Carolyne Roehm’s net worth is in millions. Picture Source: Pinterest.

Carolyne owns a website where we can find her published books and several fashionable items such as jewelry, notecard, art prints, and many more. Some of the items with their respective prices are listed below:

Furthermore, undoubtedly, she also earns an enormous amount of cash from sales of her books. Some of Carolyne Roehm’s books with their prices are:

Talking about Carolyne Roehm’s house, she owns a beautiful classical house that was purchased by her and ex-husband Henry Kravis together. The house was also parodied in the movie The Bonfire of the Vanities.

Likewise, she is also a kind-hearted woman who has worked with several charitable organizations for the welfare of the needy people. 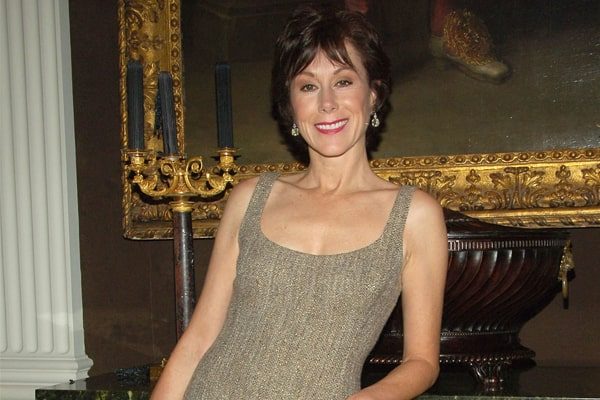 By looking at Carolyne Roehm’s sources of income, we believe that she has amassed herself, a hefty sum of money which will inevitably increase in the upcoming days looking at her endeavors.

Stayed In Coma For Several Weeks

Carolyne Roehm posted on Instagram that she suffered an illness for which she was hospitalized in Vassar Hospital, where she remained in a coma for several weeks. 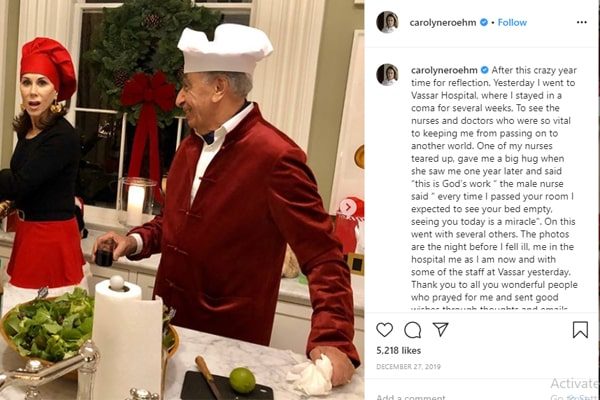 Carolyne Roehm revealed via Instagram that she was in a coma for several weeks. Photo Source: Carolyne’s Instagram.

Despite having a lot of health struggles in her life, Carolyne survived because god always blesses a warm-hearted human being. As of now, she is excellent and is back to her daily work.

For More Updates On  Entertainment, News, and Biography, Click SuperbHub.