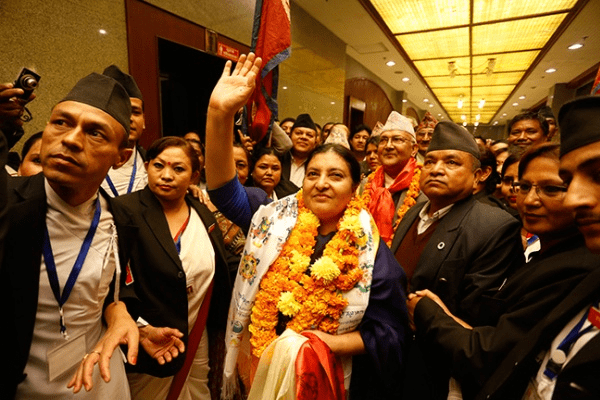 Current and second President of Nepal, Bidya Devi Bhandari husband was a renowned leader of communist party while she became the first woman to hold the presidency.

Apart from holding the presidential position, Bidya Devi Bhandari is also the commander in chief of Nepalese army. Before turning into the first woman to hold the office, she was the vice-chairperson of the Communist Party of Nepal. In addition, she was the chair of All Nepal Women Association.

Previously, she served as the Minister of Defense and the Minister of Environment and Population in 1990s. Similarly, Bidya Devi Bhandari husband, Madan Bhandari, had played vital role to bring democracy.

Bidya Devi Bhandari was born on June 19, 1961. Her place of birth is Bhojpur, specifically, Mane Bhanjyang. She was born to Ram Bahadur Pandey and Mithila Pandey. Bhandari holds Nepalese citizenship.

Bhandari was involved in leftist student union and therefore, got the membership of Communist Party of Nepal- Marxist –Leninist (CPN-ML) in 1980. Due to her early political involvement, getting into the political career later came easier for her. As a result of her continuous activism in politics, Bhandari got opportunities to rise.

Bhandari was active in politics and joined the Youth League of CPN (ML) in 1978 when she was in Bhojpur. One of the remarkable roles she played in her political activism is becoming the eastern in-charge for Eastern Zone Committee of ANNFSU from 1979 to 1987.

However, her political journey actually started after receiving the CPN(ML) party membership in 1980. In her campus, Mahendra Adarsha Multiple Campus, Bhandari was the Treasurer for Federation of Students’ Union (FSU). Further, she became the chairperson of the women’s wing of GEFONT starting from 1993 until 1997.

Later, she won the election and became the vice-chairperson of the party in its 8th general convention. During this time, her activities remained inactive. The party chairman and former Prime Minister of Nepal, Khadga Prasad Sharma Oli, considers Bhandari as one of the confident leaders of the party.

After Bidya Devi Bhandari husband died in an accident, she participated in parliamentary elections in the years 1994 as well as 1999. Consequently, she won election defeating Prime Minister Krishna Prasad Bhattarai and Damanath Dhungana, respectively. Nevertheless, in 2008 Constituent Assembly Poll held in 2008, she lost the position.

Bhandari served as the Chair of the All Nepal Women Association in addition to holding the position and responsibilities of vice-chairperson of CPN (ML). Later, Bhandari won election and became the President of Nepal on October 28, 2015 succeeding Dr. Ram Baran Yadav.

As a candidate running for the post of president, Bhandari received 327 votes out of 549 in parliamentary voting. Therefore, she defeated candidate Kul Bahadur Gurung and became the first woman and second President of Nepal.

Acknowledgement and Net Worth

The woman serving for the first time as President and Minister of Defense in the government of Nepal has gained worldwide recognition. The Forbes magazine has ranked Bhandari in the 52nd position in the list of the world’s 100 most powerful women.

In addition to the recognition and growing fame due to political involvement, Bhandari has amassed good net worth. However, her fame as one of the most influential leaders is more significant. Therefore, there is no data available that clarifies her net worth.