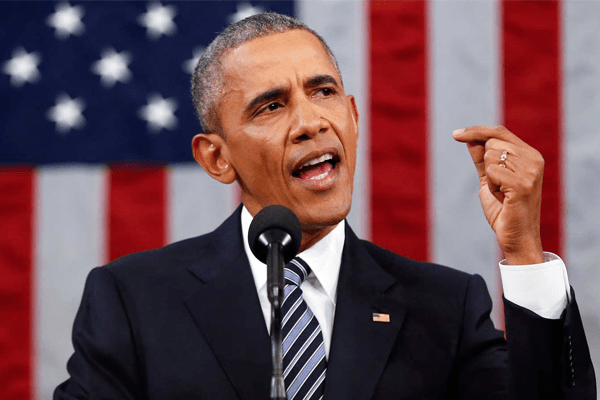 Barack Obama is the great personality who have been popular all over the world through the way he handle the nation during his inauguration. Barack was elected as the 44th president of the United States and besides that, he was renowned as the first African American who has been able to maintain the position of president for 8 years. Moreover, he is also recognized as lawyer, lecturer, professor, and writer.  Barack Obama seems to be involved in multi-sector.

A man renamed as a god-gifted and soft-hearted personality Barack Hussein Obama II, was born to Obama Sr. and his wife Ann Dunham on August 4, 1961 in Honolulu, Hawaii, United State. Back to the history of his parents, the couple had met while studying at the University of Hawaii at Manoa, and they married on February 2, 1961. After the six months of togetherness, they welcomed Barack but unfortunately after several years i.e. on march 1964 the couple officially announced divorced.

Afterward, his mother married Lolo Soetoro who is a student from Indonesia. So, Barack along with his mother and Lolo moved to Jakarta. In 1970, her mother gave birth to a daughter named Maya Soetoro Ng or Barack had his half-sister. In the meantime, because of the several incidents happening all over Indonesia Ann Dunham got scared and sent Barack Obama to his grandparents for his safety and education.  Later on, his mother and half-sister joined them.

Though, Barack Obama had spent most of the lifetime with his mother, he had struggled a lot with the absence of his father. In 1981, his father lost both of his legs in a car accident. Sr. was then confined to a wheelchair which leads him to be out of his job. Again while travelling in Nairobi, Obama Sr. got another car accident and thus died on 24 November, 1982. At the time of his death, Barack was remained a myth.

Barack Obama, initially in 1966 started his education from Noelani Elementary School and studied there for one year i.e. till 1967 and then joined to St. Francis of Assisi Catholic School (1968 to 1970). He seems to be enrolled in multiple Schools, Colleges and Universities.

Regularly, he moved to State Elementary School Menteng 01 (1970-1971) where he performed arts programs along with academics and athletics. In 1971 he went to Punahou School and remains there until 1979.

Later Occidental College (1979- 1981), where Obama thrives himself in a complex cultural and intellectual resources, Columbia College of Columbia University in the City of New York (1981-1983) from where he completed his undergraduate degree and finally got enrolled to Harvard Law School (1981-1991) and got a certificate of legal education.

As per my experience, no one could tolerate the level of patience if any misconception arises regarding the name of the state of which they are citizen. But, behind that, problems or differences occurring between or among the individual of the same state hurts the most. In a direct sense, conflict between the brotherhoods is the major hindrance beside the infrastructural, economic, ecological, social and cultural development.

Barack Obama along with millions of people are the victims of the same case. Barack used to think about what racism actually is and what it meant to be African American. All problems are born of inquiry and that inquiry eventually leads to invention. Barack who has been dominated in case of racism later decides to resolve the perceptions of his multiracial heritages and succeeds too.

His real journey began, while he was enrolled to Harvard Law School, where he was elected the first African American editor of the Harvard Law Review. Subsequently, Obama returned to Chicago and practiced as a civil right lawyers and worked for non-profit organizations. Apart from that, he also taught constitutional law as a part time job at the University Chicago Law School (1992-2004).

In 1995, Barack Obama had his first autobiography whose main theme was based on the Dreams from My Father: A Story of Race and Inheritance published. The work got unbelievable appraisal from every public and literary figures such as Toni Morrison. The autobiography has been printed in more than 25 languages. In 2006 Obama received Grammy Award for the audiobook version of Dreams.

The positive feedback and support from the public leads him to run as a Democrat and won an election in 1996. During his period, as a state controller, Obama worked with both Democrats and Republicans. He contributed in the sector of health care services and educational sector by enhancing or expanding educational program for the poor and also created state earned income tax credit for the struggling hands.

It is quite clear, there are always the opponent parties behind the every successful personality and so are of Obama’s. Barack Obama was attacked numerous time but then by following 9/11 attacks in 2007 he just forwarded his steps towards the development of nation and its citizens. “The more he was drawn by opponent parties the more he raised along with the steady and strong perception”.

In 2004, Barack Obama thought of working for the U.S. Senate, vacated by Republicans Peter Fitzgerald. He defeated multimillionaire businessman Blair Hull and Daniel Hynes with 52% of the vote. Obama usually encouraged and emphasized the importance of unity. After the convention, he moved to U.S. Senate and his opponent was supposed to be Jack Ryan, Republican primary winner. In 2004 it was decided to replace Ryan through Republican nomination by a diplomat and former presidential candidate Alan Keyes.

But, Obama and Keyes were supposed to have opposing views on stem cell research, abortion, gun control, school vouchers and tax cuts. Further in 2004, Obama received 70% of the vote against his opponent party Keyes and that was supposed to be the largest victory in Illinois history. Then he became third African American elected to the U.S. Senate.

The positive change is through experience. He was the real victim since his early age so he expanded his efforts to destroy weapons of mass destruction and raises the voice of unity with a slogan all people should be treated equally regardless of their identity.

In 2006 Barack Obama released his released his second book the Audacity of Hope based on thoughts on Reclaiming the American Dream. Within the date of its release the book hit number 1 position on both the New York Times and Amazon.com best-seller lists.

In 2007 Obama was announced for the 2008 Democratic presidential nomination. That time he was about to compete with former first lady or U.S. Senator from New York Hillary Rodham Clinton. On June 3, 2008 Barack Obama become the Democratic Party’s presumptive nominee a sufficient number off pledged.

Constantly on November 4, 2008, Barack Obama defeated John McCain by gaining 52.9% to 45.7% and was announced as the 44th president and the first African American to be in that position. Obamas initiation began on January 20, 2009 along with his running mate Delaware Senator Joe Biden as a vice-president.

He then began his agenda with an aim to go through economic development, reinventing education and health care. He believes that all issues should be undertaken simultaneously by stating the problem we face are real and it couldn’t be solved  in a short span of time but it’s quite sure one day they’ll be met.

After 100 days of his initiation Obama encouraged Congress to expand the sector of health care insurance for children and provide legal protection for women. $787 billion was passed to broaden the short term economic growth, new rules and regulations were formulated regarding tax cut for working families or small business oriented individual, distribution of loan were allowed, credit market were developed, loosen the ban on stem cell research.

After fulfilling the basic requirement of the nation, he further moved towards improving the relations with several international countries. Today’s world is the world of science and technology. Every state in order to cope with the innovations and invention must maintain a good relationship with the nearby nations. Obama was aware about the positive and negative sequence of globalization and hence expand its market through the world. Thus the agenda leads him towards the foster development in economic and social sector along with the export and import of goods among the several nation.

As he was active in every aspects, the country faced a very good environment after his appointment as a President and he was awarded with the Nobel Peace prize by the Noble Committee in Norway in 2009. On 2010, as his first speech Obama delivered, “Obstacles are the means to achieve the dream so we mustn’t quit rather we must be committed and straight forward towards our dream.” He further insisted to every individual to strengthen their union and move for the changes.

Despites having lots of obstacles, ups and downs, rumors, etc. he never stop towards his passion he just move on and lead the United State to the better position.

In 2012, Barack Obama faced an election and won second four year term as a President by receiving five millions vote against his opponent. He visited several nations like India, Iran, Russia, Europe, and so on.

In 2015 Barack Obama demonstrated his commitment to environmental issues and Obama administration announced “The Clean Power Plan” in order to reduce greenhouse gas emissions. As a farewell message, he stated, “country only could insight the brighten part if there is the involvement of an ordinary people and they come together to claim the weak site of the nation.”  We all were the reason behind the better America it’s today.

A peaceful transfer of power to the president Donald Trump elected on 2016 with a big congratulations to him symbolizes Barack Obama as the honest man with the positive concepts. He also claimed, “Though my position is replaced, I won’t stop, I’ll be there with you all as a normal citizen struggling and fighting for our rights”. He further state, believe me, you have the ability to bring change I was just the mean representing your ideas. It is just we must go for it, work on it, and not granting the identity to another.

Barack Obama and her wife Michelle Robinson were married on October 3, 1992. The couple are blessed with two daughters named Malia (1998) and Sasha (2001). Talking about Barack Obama’s love life the couple were met at the Chicago law firm of Sidley Austin as a summer associate, where Robinson working as a young lawyer was assigned to Obama’s adviser. Then they began dating one another and finally bonded in a relationship of husband and wife.

This is what happens when the people vote. Congrats @RalphNortham and @PhilMurphyNJ . And congratulations to all the victors in state legislative, county and mayors' races. Every office in a democracy counts!