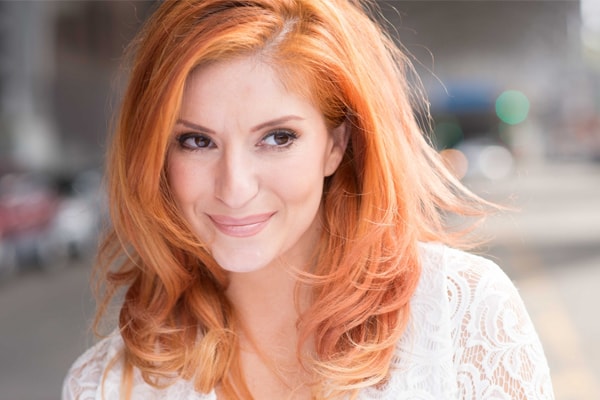 Dutch and American actress, singer and dancer, Anneliese Van Der Pol songs and performances have won the heart of millions of her fans in addition to prestigious awards.

Born in 1984, Anneliese Van Der Pol is best known for her role as Chelsea Daniels on That’s So Raven. Similarly, The Walt Disney Company has recorded several Anneliese Van Der Pol songs. Van der Pol made her Broadway debut in 2007 and gained prominence through her acting in 2010 film Vampires Suck.

Anneliese Louise Van der Pol was born on September 23, 1984 in Naaldwijk, Netherlands. Her father, Willem van der Pol is a Dutch director of the Physical Plant at the California State University while her mother, Dyan Ross, is an American from Brooklyn, New York City.

She grew up with two older sisters, Rachel and Sarah. When she was 3 years old, her family moved to the US. Therefore, she holds both the Dutch and American citizenship.

Van der Pol went to Washington Elementary School in California where she began acting when she was in her third grade. She then attended Bellflower Middle School and High School before graduating from Orange County High School of Arts in 2001.

She portrayed Sandy Dumbrowsky in the Huntington Beach Playhouse in 1999 for which she earned a Bobbi Award for best actress in a musical. Following it, she played Evita the same year for which Los Angeles Times showered her with positive reviews.

Even though Anneliese Van Der Pol songs have fetched attention of many listeners towards her, her acting performances have drawn more attention. She was the cast as Chelsea Daniels in Disney Channel’s That’s So Raven (2003-07). Further, she appeared on the Disney Channel Games as a Red Team member.

She then landed a supporting role in Bratz: The Movie as Avery. Through the popularity of That’s So Raven, she got to sing for several music compilations. Out of many Anneliese Van Der Pol songs, Over It, A Day in the Sun, A Dream is a Wish Your Heart Makes and Circle of Life are some of the popular Disney movies soundtracks.

In 2009, Van Der Pol appeared in Vanities, A New Musical. The same year, Anneliese Van Der Pol songs earned her prominence as she recorded the Original Cast Album of the musical with Sarah Stiles and Lauuren Kennedy. They released the album on December 2009.

She portrayed Glinda in Wicked (2009) and also played twelve part in Jewish miniseries revival of Shalom Sesame. Nevertheless, the later show premiered in December 2010. Furthermore, she starred as Esther Smith in Meet Me in St. Louis (2009). The same year, she guest appeared on The Battery’s Down which premiered on YouTube in December 2009.

Anneliese Van Der Pol songs and performances won her wide fame and a number of roles. She landed in starring role in spoof film, Vampires Suck as Jennifer. The film premiered in July 2010. Along with her co-star Matt Lanter, she appeared during New York Comic Con to promote the film.

Following the role, she appeared in thriller film Cats Dancing on Jupiter. After this, she returned to television roles with NBC TV series, Friends with Benefits. Besides, she guest starred on Disney Channel’s Shake It Up as Ronnie.

Anneliese Van Der Pol songs made a comeback as she recorded For the Record: Tarantino in 2012. LML Music released the songs towards late-2012. The same year, she starred as Marian Almond in the Pasadena Playhouse production of The Heiress.

Later, she played lead role in Arizona Theatre production of Emma which ran from December 2012 to January 2013. She returned to the theatre appearing in The Importance of Being Earnest as Gwendolyn Fairfax.

Her recent roles include appearing in Ghostlight, A New Musical and Thoroughly Modern Millie in 2014. In 2016, she revealed that she will reprise her role as Chelsea Daniels for the second That’s So Raven spin-off series Raven’s Home. The series premiered on July 21, 2017.

In addition to Anneliese Van Der Pol songs acquiring her a place in music industry, her performances in TV, films and stages have won her several awards. She won Young Artist Award for Outstanding Young Ensemble Performers in a TV series for That’s So Raven.

The actress is single but she dated Orlando Brown from 2001 to 2004. They split due to misunderstanding. Afterwards, she was romantically involved with Daniel Samonas; however, she broke up with him in 2009 after a year of dating. In 2009, she started dating Sean Marquette. There is no sign of break up; instead, Van der Pol revealed that she shall be marrying Marquette soon.