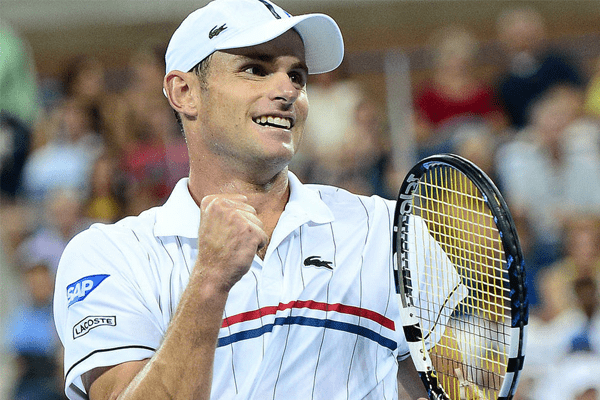 An American former tennis player, Andy Roddick career got into highlight and earned high rank with the victory over US Open Men’s Singles in 2003.

34 year old tennis player, Andy Roddick career hiked as he earned the title Top-ranked Junior Tennis Player when he was 18. The title was just the beginning to earning bigger fame like Grand Slam before he retired in 2012.

Andy Roddick was born on 30 August 1982 in Omaha, Nebraska, United States. He was born after three brothers. The family later on settled in Austin, Texas where Andy began his training in tennis in the very young age. He gained training alongside a couple of other renowned athletes Chris Mihm and Drew Brees. The fortunate enough Andy came from affluent family, so his parents could bear all the charges related to his expensive trainings, equipment and additional spending. Andy did not misuse the family’s resources either. He was genuinely interested in tennis and had very much focused in his trainings from the early age. Andy Roddick career as a tennis player got predictable as he had his mother set a net in the garage and would spend the whole time practicing there.

He was not the only tennis star in his family. Andy Roddick career in tennis started somewhat because of an influence of his brother John. John played on junior tournaments and successfully positioned him within the top ten. To provide support to John’s career and training, the family again moved to Florida. Unfortunately, John endured a back injury which led to his early retirement. John runs a tennis academy in San Antonio.

Talking about Andy Roddick career and achievements, he has won six world singles and seven doubles titles during his junior tennis career. With his incredible performances, he won two junior titles The Orange Bowl and The Eddie Herr International in Florida. For that, he received Top-ranked Junior Tennis Player title in 2000. As a junior in tennis, this was not the only title Andy had received. He also won the prestigious Legg Mason Tennis Classic in Washington D.C. in 2001 including three other tournaments.

Andy made his debut in professional career by appearing in Davis Cup as a team member. Andy won his first Grand Slam title in 2003 after defeating Spain’s Juan Carlos Ferrero at US Open. With this win, his career took a hike also resulting in ranking him number 1 in the world. Thus, he became one of the few American tennis players winning Grand Slam and first rank in the same year. With undeniably fascinating performance, Andy got the title ATP Player of the Year in 2003.

The achievements in Andy Roddick career do not end here. Andy kept on persevering throughout his career. The evidence for his ongoing success in his career is him winning The Legg Mason Tennis Classic for the third time in 2003 along with Artois Championship for the fourth time in the same year. The year 2007 was evidently quite productive for Andy as he broke record by winning 18 tiebreaks consecutively. The same year, Andy successfully positioned him in the fifth rank.

Andy made it to the Wimbledon final in 2009 but he lost to Roger Federer. In 2009, Andy had to endure a knee injury due to which he had to stop his training. Later on, he also underwent a shoulder surgery after his loss in Wimbledon in 2010. In the same year 2010, Andy made it public that he has mononucleosis—a viral infection with symptoms similar to that of a flu. The year 2010 did not come up to be good for Andy as he again underwent a groin and shoulder injury. Health is crucial for a player; however, Andy’s health began deceiving him and his career. After a couple of years, in August 2012, Andy announced his retirement plans. He partook in the 2012 US Open and lost in fourth round to Argentinian Juan Martin del Potro. It was the last tournament of Andy Roddick career in tennis.

Andy married American model and actress Brooklyn Decker in 2009 after dating for a couple of years. The couple currently resides in Austin, Texas.

Andy is not only a career person; he focus is also oriented towards the social responsibilities. He established Andy Roddick Foundation with an aim to support underprivileged children. As good works end up with rewards, Andy also earned Arthur Ashe Humanitarian Award in 2005 and 2007 for his humanitarian associations.

Andy Roddick career lasted as a celebrity even after his retirement because of his previous performances and his ability to link with his fans. He had publicly appreciated the support of his fans, for which he has made a big place in the heart of his fans with the prestigious position in his career.  He became famous as different magazines covered him. People magazine named him Sexiest Athlete in 2013 while different magazines like Rolling Stone and Men’s Fitness have made him the cover model for a long time. His fame rose as he hosted Saturday Night Live in 2013.

Awarded for marvelous performances since the early age and also for the philanthropic works, Andy has received heartwarming responses from his fans all through his life. The winner of Grand Slam and Legg Mason Tennis Classic does not only define Andy Roddick career success; they also demonstrate his passion and dedication to tennis.

I enjoyed the conversation. You did well! Give yourself some credit! https://t.co/rhrvwWocN9