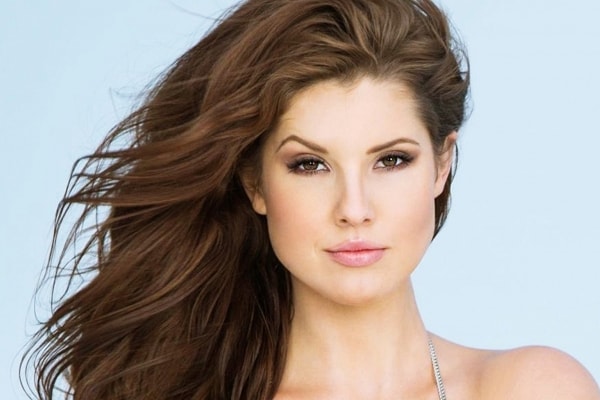 Amanda Cerny is an American internet personality, actor, comedian, and model. She first came into the spotlight after her comedy sketches stated getting noticed in the social media. She is also a former Playboy Playmate of the Month for the month of October in the year 2011 when she first started her career as a model. Amanda Cerny net worth is known to be very high. The attractive Amanda Cerny bio is given below.

Amanda Cerny was born on June 26, 1991, in Pittsburgh, Pennsylvania. She was raised by her parents along with her sister Samantha Cerny. Her family moved a lot during her childhood with living in more than 5 states. Finally, the family settled in Florida where Amanda spent her teenage years. Her sister also has an enormous presence on Instagram and has been featured in Amanda’s social media accounts from time to time. Amanda started her modeling career when she was still in her high school at an early age of 15. After completing high school, she enrolled in Florida State University to study International Affairs.

Amanda Cerny began when modeling career when she was just 15 years old. At first, she took it as only a hobby and not as a stable job. But this changed when one of her classmates got featured in Playboy Magazine. Seeing her fellow classmate get such opportunity, Amanda changed her view about modeling as just a hobby and sent her own photos to the magazine. She soon started getting featured in the magazine and was even featured in the 2011 edition as a playmate in October. She was also named one of the Sports Illustrated Lovely Ladies of the day. She also modeled for Health and Wellness magazine. Being already a famous model, Amanda’s fame rose even to a higher level when she started posting funny vines on her social media accounts. This gained her more recognition all over the world and raised Amanda Cerny net worth and prominence.

Besides being a model and renowned social media personality, Amanda Cerny has also appeared in several movies to the date. Some of her already released movies include The Coach Who Clothed Them, Internet Famous, and The Bet and so on. There are other movies of her which are yet to be released in the future such as Airplane Mode, #Speedball, Public Disturbance and so on. Seeing her success till now, it can be estimated that there will be more of her movies in the future.

Amanda Cerny has had her fair share of relationship in the past. She dated comedian-actor, Dane Cook in 2011. Their relationship did not last long. Amanda Cerny then went unto date fellow vine star King Bach in 2015. They used to make videos together and were one of the hottest internet couples. They soon broke upon a mutual term and can still be seen together on some videos.  Amanda then dated famous singer Justin Bieber in 2015. Their relationship gained major headlines all over the internet, so did their break-up after some time. Amanda Cerny is currently in a relationship with another fellow vine star Logan Paul. They have been together since 2016 and can be seen together on several videos.

Amanda Cerny is currently 26 years old. Her height is measured at 5 feet 7 inches. She is of American nationality and belongs to white ethnicity. She has got an attractive body with measurements 37-25-36 inches.

Amanda Cerny is a renowned social media personality. She is widely recognized for her various social media accounts. Her Instagram account has more than 17 million followers. Her photos can be seen in it with her perfect figure. Amanda Cerny diet is the reason behind her having a perfect body. Similarly, her Twitter account has more than 878K followers. Recently, Amanda Cerny vegan campaign made headlines when she posted about it on her Twitter account. Amanda has around 1.9 million subscribers in her YouTube account. Amanda Cerny makeup tutorials can also be found on YouTube. Amanda Cerny Facebook page enjoys more than 7 million likes. Her fans follow her in all of her social media accounts to know more about her.   Amanda regularly posts new photos and other updates related to her in all of the accounts.