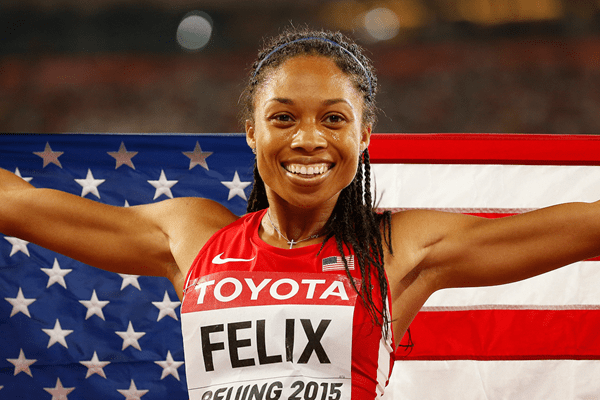 Allyson Michelle Felix was born on November 18, 1985, in Los Angeles, California, U.S. Allyson Felix was born to parents Paul Felix and Marlene Felix. Her father, Paul worked as the ordained minister and professor of New Testament at The Master’s Seminary in Santa Clarita Valley. Allyson’s mother, Marlene worked as a teacher at Balboa Magnet Elementary. Allyson spent most of her childhood days with her brother Wes Felix who is also a sprinter.

Allyson went on to receive her education at the Los Angeles Baptist High School in North Hills, California. She went on to be coached by Jonathan Patton. Allyson joined the University of Southern California and graduated with a degree in elementary education.

Altogether, Allyson Felix won 22 gold medals for her various performances. Furthermore, she has won 8 silver medals and 3 bronze medals. Her personal best in the 100 m race is 10.89 seconds in the 2012 Olympic Games. She has excelled at 21.69 seconds in 200 meters and at 49.26 seconds in 400 meter. Allyson Felix is known to have run the fastest split ever by American women and the fastest ever in 2015 World Championship.

Allyson Felix has been honored many times for her remarkable athletic career as a sprinter. She has been honored with an ESPY Award for Best Female Track Athlete. Allyson has also won the Glamour Award for The Unstoppable. Allyson has also received the Jesse Owens/Jackie Joyner-Kersee Award in 2005, 2007, 2010, 2012, and 2015. Allyson has been a huge inspiration to aspiring sprinters and other young athletes who want to find success and fame in their field of work.